Quotes after the DTM show event in Munich 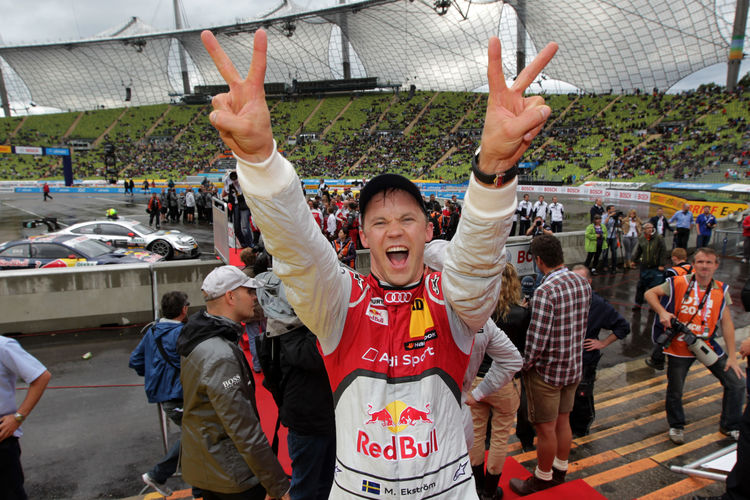 Mattias Ekström in the Audi A5 DTM won the single competition at the DTM show event in Munich in front of 45,000 spectators (throughout the weekend). Timo Scheider and Adrien Tambay made it into the final of the relay competition. Quotes from the Audi camp.

Dr. Wolfgang Ullrich (Head of Audi Motorsport): “It was a very thrilling final and a nice event that was good fun. Even spectators who weren’t into motorsport very much before were able to see how exciting and captivating the DTM can be. In the end, it was especially nice that Mattias (Ekström) managed to win for Audi after we had previously reached the final of the relay competition on Saturday with Adrien (Tambay) and Timo (Scheider).”

Mattias Ekström (Red Bull Audi A5 DTM), winner
“It was a nice weekend. The set-up superbly fit. The car was perfect throughout the weekend. The final against Jamie (Green) was tough; I was running behind after the first laps. But I managed to improve and win. There are no points awarded for this victory. But we showed that we’re able to win races and it was a fantastic reward for the team. Now we’re going into the five-week break with a good feeling.”

Mike Rockenfeller (Schaeffler Audi A5 DTM), 6th place
“It was a shame not making it into the semi-final. It was a close decision against Jamie (Green). I drove here in wet conditions for the first time. The start was good but then I lost some time. My pit stop wasn’t optimal; that’s where we could have made up some ground against Mercedes. It was fun; and a nice weekend for me and my guys.”

Edoardo Mortara (Playboy Audi A5 DTM), 11th place
“For me, it was a difficult weekend. In free practice, we showed that we’re quick. Then we had a bit of misfortune in both races and could have achieved a better result. In the quarter-final today, I lost against Coulthard. Before the heat, it started to rain. My track was a bit wetter; the conditions weren’t the same for both drivers and Coulthard advanced.”

Filipe Albuquerque (TV Movie Audi A5 DTM), 12th place
“The first heat against Andy Priaulx was very good. We were running on fresh tires and I managed to win. In the second heat against Jamie Green there was nothing I could do. I was running on used tires while he was on fresh ones. The positive thing was that our car remained undamaged and that in the end we were quick.”

Miguel Molina (Red Bull Audi A5 DTM), 14th place
“I enjoyed the weekend. It’s positive that were able to drive without any pressure here. It was a nice event for the crowd and the drivers.”

Rahel Frey (E-POSTBRIEF Audi A5 DTM), 15th place
“Munich was a great thrill. In terms of weather, we had everything – wet, dry, dry again and wet. There were also a few surprises with regard to the results. I’m quite pleased with my performances. This morning I had a superb run. In the second one, I took a bit of a risk with tires, which didn’t work out. The crowd got to see a great show and I think that everyone enjoyed the event a lot.”

Adrien Tambay (Audi ultra A5 DTM), 16th place
“It was a thrilling duel against Bruno Spengler because we had some rain during the race and the driving was difficult. In the end, I closed the gap to him. I was driving close to the limit and gave everything. Unfortunately, it didn’t work out but it was very close. After we managed to clinch a podium place yesterday, it was very tight again today.”

Timo Scheider (AUTO TEST Audi A5 DTM), 19th place
“Unfortunately, our expectations came true. Due his early elimination yesterday Robert Wickens competed on new tires today. Since we used both tire sets on Saturday I knew that it would be difficult. On used tires, I wasn’t able to really put up a fight. That’s a shame but on Saturday we achieved a sensational final and celebrated a podium.”

Hans-Jürgen Abt (Team Director Audi Sport Team Abt Sportsline): “Winning at the Olympic Stadium was a tremendous experience. For us as a team, it was a great challenge. After the initial difficulties this season, we wanted to show that we’re still in contention. ‘Eki’ showed that he’s among the best drivers in the field and he clinched victory for Ingolstadt. We can only take our hats off for that!”

Ernst Moser (Team Director Audi Sport Team Phoenix): “An optimal result for Audi. We took a gamble on the tires on Saturday, didn’t use all the slicks and reached the final nonetheless. Today, ‘Eki’ showed a superb performance and brought victory home with a pit stop thriller. Well done to ‘Eki’ and Audi. Our team was eliminated by only a narrow margin each time; we’re very pleased and already look forward to next year.”

Arno Zensen (Team Director Audi Sport Team Rosberg): “It was a great event. Like last year, an Audi won again – this time on Sunday. Well done to ‘Eki.’ We suffered a bit of misfortune, but that’s part of the game.”