Quotes after the DTM finale 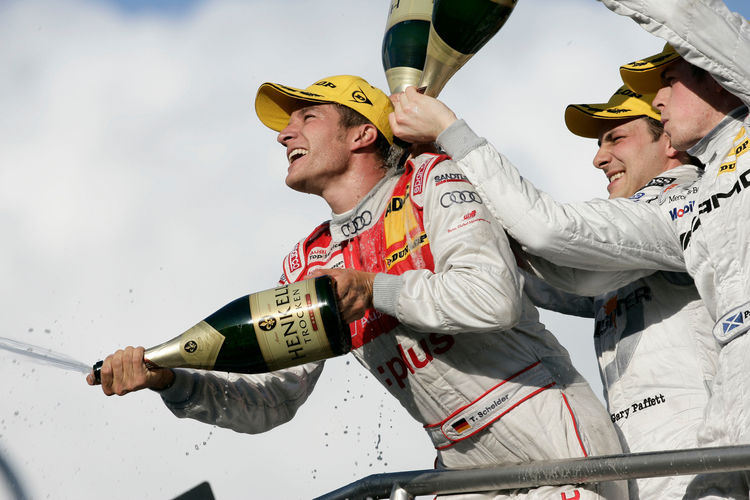 With a second-place finish in the finale at Hockenheim Audi driver Timo Scheider again secured the DTM title. Quotes from the new DTM Champion and his brand colleagues.

Dr. Wolfgang Ullrich (Head of Audi Motorsport)
“It was a race that, particularly on the first few laps, was as thrilling as we’d expected it to be. Timo (Scheider) acted in a similar way as last year. He drove at a very good pace and stayed clear of all trouble. This enabled him to finish in second place, which was a very comfortable result for him. That had been his goal as well. It was obvious that Mattias Ekström could have achieved more today. Unfortunately, he was again deprived of the chance to finish and celebrate an exploit. Gary (Paffett) showed a very strong performance. In the beginning there were some tough fights but I think that’s part of touring car racing. I’m very happy for the whole team that worked very hard. Like last year, we should stress the fact that Timo himself managed the situation in the final race. That shows his strength. He’s a worthy champion — and for the second time in a row!”

Timo Scheider (GW:plus/Top Service Audi A4 DTM 2009 #1), 2nd place
“My start was very good. After that, it was a feast for my eyes to watch how Gary (Paffett) and Eki wrestled with each other. They really went all out in their duel. With a little more courage I might have squeezed myself into the leading position, but that seemed too risky to me. That’s why I restrained myself and tried to keep everything that produces performance intact on the car. I managed doing that. It’s true that Gary won four races and I just won two – but ever since I’ve been in the DTM the driver who had the highest points score in the end was the one to win the championship. And that’s me. It’s great that we managed winning the title again. I’ve been able to experience this dream for as much as the second consecutive time – thanks to the Audi squad, my Abt team and my family. It’s been a fantastic season!”

Alexandre Prémat (Audi Bank A4 DTM 2008 #14), 4th place
“A fantastic race! Starting from twelfth on the grid and finishing fourth is great – especially in the finale, because my season was very, very rough. Today, everyone was able to see my potential. I’m personally very pleased but I’m also very happy for Audi.”

Oliver Jarvis (Audi Cup A4 DTM 2008 #15), 6th place
“A race to really enjoy! Many fights, many overtaking maneuvers. Everything was going well in the first third of the race but the first pit stop was poor. After that, I pushed to recover. There were great duels with Markus Winkelhock, Bruno Spengler and at the end with Jamie Green too: A result in the points and the title for Audi – a fantastic weekend. Congratulations to everyone at Audi and of course to Timo Scheider.”

Markus Winkelhock (Playboy Audi A4 DTM 2008 #12), 8th place
“The start was super. I started from position 13 and after the first lap was among the top six. The car worked very well in the beginning. After the first pit stop the pace was pretty good as well. After the second pit stop the car was almost impossible to drive on the brakes. At times, I had to brake almost 50 meters earlier. The rear axle was clearly worse than in the first and second part of the race. I was no longer able to keep the pace; otherwise sixth place would have been possible.”

Mike Rockenfeller (S line Audi A4 DTM 2008 #11), 9th place
“Congratulations to Timo (Scheider) and Audi. I’m incredibly happy for them. It’s been a fantastic season, ‘well done.’ I could have done better today but, unfortunately, it was over for me again as early as after the first lap. I had a super start but someone hit my car. Down in the hairpin Martin Tomczyk spun off in front of me. I had to get out the way and was almost running in last place after the first lap. I did a good job of pushing to make up ground again and finished ninth in the end. Unfortunately, that was all that was possible.”

Tom Kristensen (100 Jahre Audi – A4 DTM 2009 #2), 15th place
“A hat-trick for Audi, that’s fantastic. I enjoyed my last race even though there were a few challenges. As early as on the first lap I was turned around, and then it happened again later. But I did enjoy all the other laps a lot. The car was good. But that’s not what counted. The main thing was the fantastic time with Audi Sport Team Abt Sportsline. In every race and in every year the mechanics did a brilliant job. They never built any defects into the car. My car was always perfectly prepared. Many thanks from me to Audi for giving me the chance to enjoy such a racing series — although I drove a lot more formula and sports car races before. I’m very, very happy. I’ll miss working with everyone here. I’ll also miss the fans. The 24 Hours of Le Mans are my race. I’m already looking forward to preparing for it.”

Katherine Legge (Audi Collection A4 DTM 2008 # 21), 17th place (retirement)
“At the start I tried to stay clear of any trouble because I knew that I had a fast car. We were competitive, but apparently some people didn’t like that. There were a lot of close fights. I was hit too. The situation got worse and worse and in the end I was forced to give up because the aero components were scraping my tires.”

Mattias Ekström (Red Bull Audi A4 DTM 2009 #5), retirement (radiator)
“Unfortunately, I had a hole in the radiator as a result of the duels on the first lap. There were a few incidents of minor body contact with Gary (Paffett) and at some point I had to drive across the grass. It’s really too bad not to be able to finish. But I’m happy that the race went so well for Timo (Scheider).”

Martin Tomczyk (Red Bull Cola Audi A4 DTM 2009 #6), retirement (accident)
“My race started very well on the grid. After turning into the hairpin behind Tom (Kristensen) and reaching the apex I was hit hard in the rear. As a result, I turned Tom (Kristensen) around and pushed Maro (Engel) off the track.”

Hans-Jürgen Abt (Team Director Audi Sport Team Abt Sportsline)
“The day was simply a dream. I’m proud of the entire brand, the entire team and the entire ‘Allgäu,’ and of Abt, because we clinched three titles in one season. That’s a unique feat and, to top it off, on Audi’s 100th anniversary. And we clinched a DTM title three times in a row. Three, again and again – I don’t know, but I guess that three’s my lucky number.”

Ernst Moser (Team Director Audi Sport Team Phoenix)
“I congratulate Audi on the championship, which has been achieved with a commanding performance. Both of our drivers were super-fast as well. Alex (Prémat) had a clear track the whole time and moved forward as a result of the pit stops. Oliver’s performance was okay too. He pushed and clinched places on the track. I’m totally happy. We’re in the points with both cars – a super ending of the season!”

Arno Zensen (Team Director Audi Sport Team Rosberg)
“That was a sensational race. First of all, a huge ‘well done’ to Timo (Scheider) and his squad. Becoming champion twice in a row is a sensational job! I’m not happy with our own performance. We didn’t really pull the right tricks out of our bag today. Markus (Winkelhock) was actually running well but, toward the end, had heavy understeer. That’s too bad because our potential was higher. But we’ll definitely celebrate the exploit with Audi.”