Quotes after qualifying in Brazil 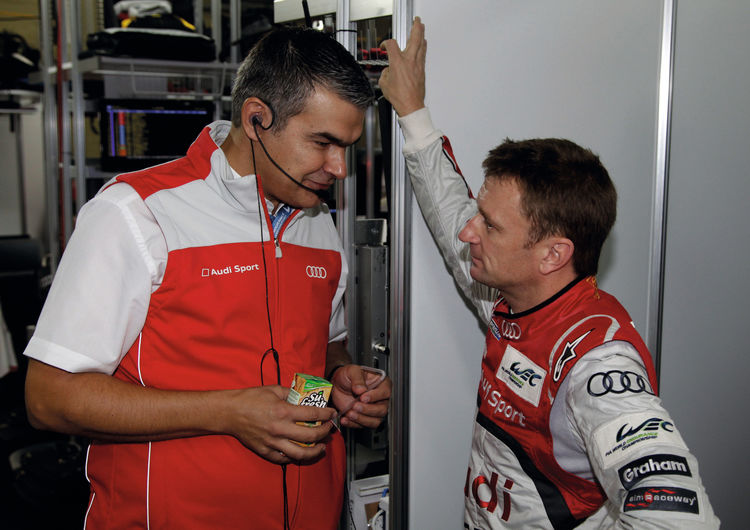 Audi will start from rows one and two to the fifth race of the FIA World Endurance Championship (WEC) at São Paulo on Saturday (September 15, 12:00).

Dieter Gass (Head of Racing Commitments): “Congratulations to Toyota on setting the best time in qualifying. That was a strong showing. But with grid positions two and three we’ve got a very good starting base for the race. Our focus is on the race and we’re hoping to be able to put everything on track accordingly. We were particularly pleased with Lucas di Grassi, who’s driving for us for the first time. He gelled well with the team and was given the opportunity to contest the qualifying session right away. In doing so, he showed a brilliant performance.”

Ralf Jüttner (Technical Director Audi Sport Team Joest): “Toyota achieved their first best time in the WEC – we sincerely congratulate the brand and Alex Wurz on this. We knew that it would be difficult to post such a time. But we did a good job in all the practice and qualifying sessions and feel that we’re well prepared for the race, which will be close and tough. Lucas (di Grassi) on his first run for Audi put the car on the front row and André (Lotterer) follows directly behind him. That’s a good base.”

Lucas di Grassi (Audi R18 ultra #2): “That was a fantastic qualifying session for me. It was my first qualifying in endurance racing and my first one with Audi. I’m very happy with the result. We gave our best but our focus was on preparing for the race. We’re in a strong position to have a nice battle on Saturday. I’m very relaxed.”

Tom Kristensen (Audi R18 ultra #2): “It’s a great experience to be contesting a race weekend in Brazil. We’ve got a new team member – Lucas di Grassi, and we want to make many kilometers in the Audi R18 ultra possible for him. Now, after qualifying, an R18 ultra is in front of the sister car for the first time. I’m expecting a thrilling race, even though we’ve got to bear in mind that the hybrid car has advantages over ours especially on the uphill section. I’m hoping for a challenging race and want to score as many points as possible.”

Allan McNish (Audi R18 ultra #2): “Well done to Toyota! But our local hero Lucas (di Grassi) did a fantastic job of driving in qualifying for us as well and showed a remarkable performance. He also fits in really well with Tom (Kristensen) and me. We knew that we wouldn’t be as quick today as Toyota in qualifying mode because we were fully concentrating on the race and the strategy. It’s anything but easy to work out a good balance for the race. The track is pretty rough on the tires. I’m very pleased with grid position two even though the starting base for the race isn’t easy.”

Marcel Fässler (Audi R18 e-tron quattro #1): “That was a very interesting qualifying session. Our preparation was targeted on the race and our starting base is good. André (Lotterer) did everything right. He just said that maybe on the warm-up lap he didn’t put enough of a load on the tires. But our pace in the race should be right and we’re well sorted, which is a lot more important.”

André Lotterer (Audi R18 e-tron quattro #1): “Qualifying was okay even though it was a bit disappointing for me personally because I started off too slowly. That’s why I wasn’t able to precisely take advantage of the best performance of the tires. In the beginning, there was more potential. But I don’t know if it would have been enough to beat Toyota. But maybe we would have been in front of our sister car. But so be it, now it’s about the race.”

Benoît Tréluyer (Audi R18 e-tron quattro #1): “This track calls for a big heart in driving. I’m sure that as we’re gathering more driving experience we’ll be able to improve our lap times some more as well. Today, we were preparing for the race and not so much for qualifying. The car feels very good and we’re thoroughly prepared for the six hours. Of course it’s a bit of shame not to be on the front row. But at the end of year, it’s not about the grid row but the championship.”