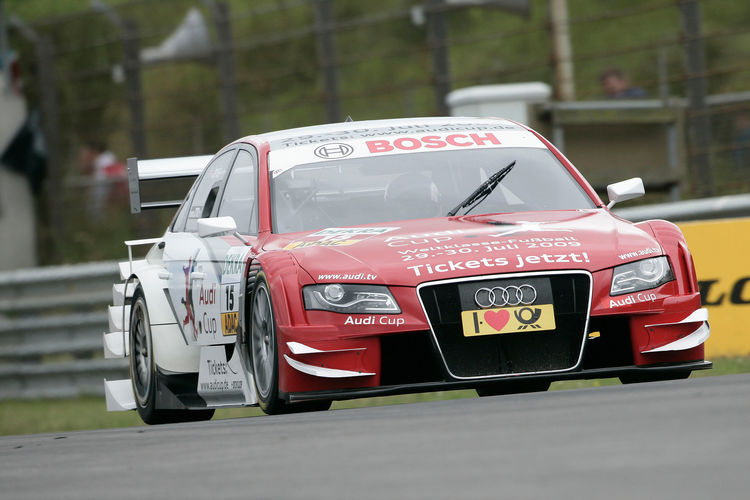 On July 29/30 the “Audi Cup” will take place at Munich’s Allianz Arena – a tournament featuring the top-level teams AC Milan, Boca Juniors, Manchester United and FC Bayern München. Fitting the soccer highlight, Oliver Jarvis (25) clinched his first pole position in the DTM race at Zandvoort – in an Audi A4 DTM that promotes the “Audi Cup.” Quotes after an action-packed qualifying.

Dr. Wolfgang Ullrich (Head of Audi Motorsport)
“Oliver Jarvis’ performance in a year-old car cannot be emphasized emphatically enough: He was in control of qualifying and clinched pole on the crucial lap by posting all the fastest sector times. We’ve always known that he’s got this kind of potential – and today he impressively proved it. Now, we’ve got to get together and analyze why our current cars are not on the positions where they belong. For the race, we’ll work out a strategy of how to get them as far to the front as possible. We’ve seen more than once in the DTM that this can be done from these grid positions.”

Oliver Jarvis (Audi Cup A4 DTM #15), grid position 1
“Wow, what a great moment! Not just for me, but also for my squad from Audi Sport Team Phoenix. We experienced two unfortunate weekends together, so we’re all the more relieved by this result today. I want to thank everyone who made this possible. But no matter how great this feeling is now: We know that the race tomorrow will be tough and will strictly concentrate on that from now on.”

Mike Rockenfeller (S line Audi A4 DTM #11), grid position 4
“Fourth place isn’t bad, but Oliver (Jarvis) is on position one. ‘Well done’ to him and his team who did a great job. He hit the bull’s eye. My car was good. But on the last set of tires in qualifying 3 I had incredible problems. I don’t know why, but I had no traction whatsoever. I also had to use this set in Q4. That meant it had already completed two timed laps in Q3. Unfortunately, more than fourth place wasn’t possible that way.”

Alexandre Prémat (Audi Bank A4 DTM #14), grid position 6
“I’m pleased and disappointed at the same time. I’m happy with sixth place because after slipping in free practice I had only 20 minutes left for driving. So, sixth place was quite alright. I’m disenchanted because I made a small mistake. I lost two tenths; otherwise I’d have made it into the fourth qualifying section. But I’m happy that my team-mate showed that it’s possible to take the pole position with this car. That’s nice for Team Phoenix which did such a good and fast job of repairing my car this morning.”

Martin Tomczyk (Red Bull Cola Audi A4 DTM #6), grid position 8
“In the first two qualifying sessions everything went according to plan. In Q3 my first timed lap was good up to the penultimate turn where, unfortunately, I made a slight braking mistake and got off the racing line. That meant the end of my qualifying because I didn’t have any more new tires and tried it again on this set. Of course that doesn’t work here at Zandvoort. Basically, the car was good enough for pole, as the previous sessions showed. I’m upset about my mistake.”

Mattias Ekström (Red Bull Audi A4 DTM #5), grid position 9
“My car was good and really quick. In qualifying 1 I even drove the absolutely fastest lap. In qualifying 2 I first went out on used tires in order to save a set for the race. On the second trial, which was the crucial one, I was behind Katherine (Legge) who was coming out of the pits. I just lost a little bit of time behind her as she moved over correctly. It was a bigger problem that it started to drizzle in the last third of the lap. That cost the crucial time.”

Tom Kristensen (100 Jahre Audi – A4 DTM #2), grid position 10
“This was not what we’d been wishing for. We basically had a very fast car. We saw that in the morning. The tenths we were lacking to get into qualifying 3 can be explained by the fact that we were on the track at the wrong time. In the last sector we were short of a few tenths. You can either laugh or cry. I choose to laugh anyway because I’d like to congratulate Oliver Jarvis on a great lap that resulted in the pole position for Team Phoenix.”

Timo Scheider (GW:plus/Top Service Audi A4 DTM #1), grid position 11
“The word catastrophe describes my qualifying pretty accurately. I can’t tell exactly why it happened. I suppose a few nuances didn’t fit together all the way. The whole grip level wasn’t the way we’re accustomed to it. Maybe this particular track surface, the temperature and the drizzle interacted unfavorably.”

Markus Winkelhock (Playboy Audi A4 DTM #12), grid position 12
“I can’t be satisfied with twelfth place. The car had more potential. It’s just that I was out of luck at the end. In qualifying 2 the first set of tires didn’t work perfectly. On the second set, I was clearly doing better. The first two sectors were good, but at the end I hit a bit of traffic and spun once. This immediately affected my time and I went to the pits right away.”

Katherine Legge (Audi Collection A4 DTM # 21), grid position 14
“The first qualifying was okay. I took it easy and things went as expected on the first set of tires. In the second qualifying my speed was right but there were a few unfortunate incidents. There’s nothing we can do about that now. But I’m optimistic for tomorrow. “

Hans-Jürgen Abt (Team Director Audi Sport Team Abt Sportsline)
“We’ve experienced numerous great moments at Zandvoort in the past few years. That’s why we won’t be disconcerted by this crazy qualifying which, of course, we hadn’t expected to go this way at all. We will deliver a supreme recovery to our fans here at the circuit and at home in the race tomorrow. Everyone on the team, whether they’re a mechanic or racer, will give everything to move forward.”

Ernst Moser (Team Director Audi Sport Team Phoenix)
“We’re incredibly happy about achieving the feat of clinching pole in a year-old car. In the morning we were already able to see that this is possible. In the past two qualifying events we always struggled with bad weather and were having a tough time because we had the wrong wheels on the cars at the wrong times. This time, it all fit perfectly. Oliver (Jarvis) was fast from the first moment. ‘Well done’ to him and the team. Alex (Prémat) only managed doing eight laps in the morning. Now, he finished sixth and wasn’t far from making it into qualifying four. You’ve got to take your hat off to that. I wouldn’t have expected this achievement, which complements our team result. Now, I’m hoping for us to remain all the way at the front in the race as well.”

Arno Zensen (Team Director Audi Sport Team Rosberg)
“Congratulations to Ernst Moser and Oliver Jarvis. It’s nice that a year-old Audi is on pole. ‘Rocky’ had quite a bit of potential too but he was running on relatively different sets of tires. The situation with Markus (Winkelhock) was too bad as well. He should have made it into the final qualifying. Unfortunately, he hit traffic. My thanks to the squad for a job well done.”