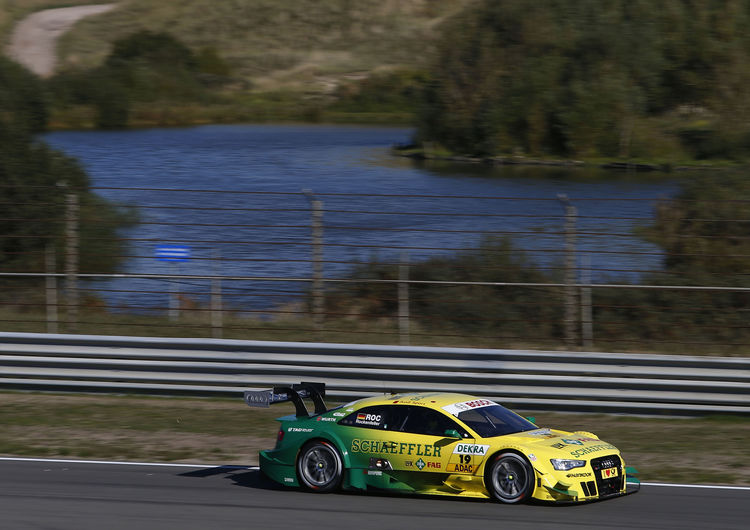 Mike Rockenfeller and Timo Scheider on the second row of the grid, seven Audi RS 5 DTM cars in the top eleven – quotes after qualifying for the DTM race at Zandvoort (the Netherlands).

Dr. Wolfgang Ullrich (Head of Audi Motorsport): “Mike Rockenfeller achieved a good starting base for the race on his own power. Now, making the right decisions in the race tomorrow will be very important. Nobody knows yet how the option tires are going to perform here – and overtaking isn’t easy at Zandvoort. The DTM fans can look forward to a thrilling race at which the start and the first turn will already be explosive, as both candidates for the title are close together on the grid.”

Dieter Gass (Head of DTM): “It can’t get much better than this. We’ve got two Audi and two BMW cars in the top four. Both candidates for the title are in contention at the front; that’s a promising situation for the race tomorrow. Thinking about our performances, we can be pleased as well. We’ve got seven Audi cars among the top eleven and can come up with something in terms of strategy for the race. We’re going to try and win tomorrow.”

Mike Rockenfeller (Schaeffler Audi RS 5 DTM), grid position 3
“It’s a good starting order, it’s got spice. I’m pleased with my position but not with my pace in qualifying. I gave everything but was struggling a bit with the car. Cracking Augusto (Farfus) tomorrow won’t be easy. But my aim of winning the race remains unchanged.”

Timo Scheider (AUTO TEST Audi RS 5 DTM), grid position 4
“A clean qualifying session without any problems and with a good way of making it into Q4. When I heard of Marco Wittmann’s time over the radio I knew that this lap could only be beaten with a lot of risk. And the risk in my case was a bit too high. Compared with my personal best time I was faster initially. I then tried to give everything and took too much of a risk. In the end, it was the second row. We can help Mike (Rockenfeller) and finish on the podium ourselves – that’ll be our aim tomorrow.”

Filipe Albuquerque (Audi Financial Services RS 5 DTM), grid position 6
“It was a very close qualifying session. The team did a great job after free practice because I wasn’t completely happy with the car this morning. I’m hoping that, like at Oschersleben, I’ll be able to make up four places again. The race will be very long and it’ll be very close.”

Edoardo Mortara (Playboy Audi RS 5 DTM), grid position 7
“It was a disappointing qualifying session for us. We were quick in Q2 and there was greater potential. Then, in Q3, we had lower grip than in Q2 and didn’t make it into the last qualifying qualifying segment.”

Adrien Tambay (Audi ultra RS 5 DTM), grid position 9
“I’m not completely happy with my performance. Q4 was possible today but I made a mistake in the penultimate turn. I’m sorry for the team. But ninth place isn’t bad. We’re going to battle in the race!”

Miguel Molina (Audi RS 5 DTM), grid position 10
“As always in the DTM, it was very close. We were always at the limit: 16th place in Q1, tenth in Q2, and always barely another lap forward. Subsequently, I wasn’t completely happy with Q3. But it’s always good to make it into the top ten. With that, we’ve got a good chance to help ‘Rocky’ (Mike Rockenfeller) and Phoenix in the battle for the title.”

Mattias Ekström (Red Bull Audi RS 5 DTM), grid position 11
“I’m looking forward to the race. But starting from position eleven is more difficult than when you’re further at the front. Half the field is in front of me, the other half is behind me. My aim is to overtake as many cars as possible. Those who know me know that we’ll only give up after the checkered flag has come out.”

Jamie Green (Red Bull Audi RS 5 DTM), grid position 17
“It was a short qualifying session. We only went out twice; the best lap came in the first outing. Before qualifying, we’d changed the set-up a bit and that didn’t pay off. Some of the changes weren’t positive. I first had to get used to the car in qualifying, which isn’t ideal. On such a short weekend, you’ve only got little time for changes.”

Hans-Jürgen Abt (Team Director Audi Sport Team Abt Sportsline): “It was a close qualifying session again. But we’re pleased with our starting base because we believe that we’ve got a good race set-up. We’ll see to supporting ‘Rocky’ (Mike Rockenfeller) tomorrow; we’re starting from the same row.”

Ernst Moser (Team Director Audi Sport Team Phoenix): “A good qualifying session with both cars among the top ten. That’ll help us a lot in the team classification, as the two Mercedes, which are leading the standings, are far at the rear. We’ve achieved a lot and are closely trailing Augusto Farfus. We’re going to try and stay on his heels in the race or to overtake him. ‘Thanks’ to the team and the two drivers who showed very strong nerves.”

Arno Zensen (Team Director Audi Sport Team Rosberg): “Positions six and seven aren’t so bad. In Q2, Edo (Mortara) drove the best time. But afterward he didn’t manage to do that well anymore. In each sector, he lost some time although everything on the car was the same. We’ve got a good base; we can build on that for the race tomorrow.”