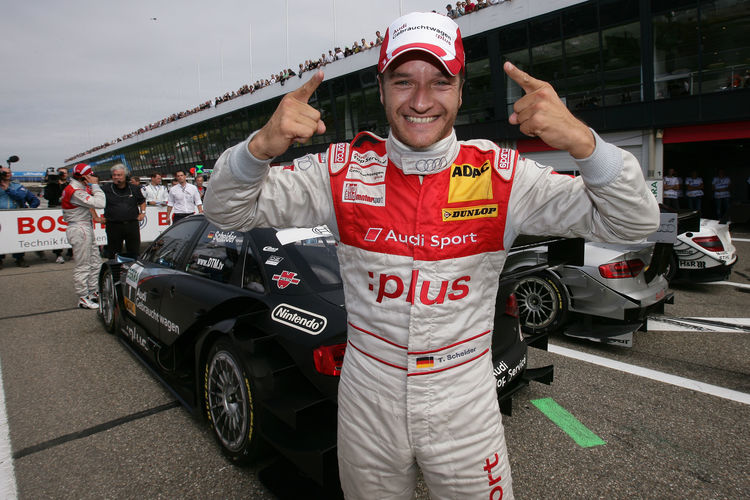 With a record lead with respect to the DTM’s current qualifying format Timo Scheider clinched the pole position for the DTM race at Zandvoort (Sunday, starting at 1:45 p.m. – local time – on “Das Erste”). Quotes from the Audi squad.

Dr. Wolfgang Ullrich (Head of Audi Motorsport)
“It’s very nice that Timo (Scheider) has come back with this performance and the pole position. I’m optimistic that he has regained his usual form. Miguel Molina managed to deliver a very positive surprise. Making it into Q4 in a year-old car on this track – I can just take my hat off to him for that. ‘Eki’ just very barely missed making it into the top four. Surely, he wasn’t satisfied with his lap. But at least he’s in front of Bruno Spengler. We’ll try and convert that into a good team result on Sunday. That’s possible and we’ll concentrate on that.”

Timo Scheider (GW:plus/Top Service Audi A4 DTM #1), grid position 1
“This feels incredibly good, especially after it’s been such a difficult season so far. Coming back in qualifying here at Zandvoort, on one of my favorite tracks, is really special. Particularly after such a difficult early phase it feels good to get everything right. Another thing that feels good is the trust that the team has put in me from the outset – even at times when things weren’t going so well. The guys have been working hard, and so have I. We had to be patient to show that at some point in time we’d get it together again. We showed that today. And I’m proud of it.”

Miguel Molina (Audi Bank A4 DTM #18), grid position 4
“A wonderful result. We did a very good job of working with the car and came up with a nice set-up. This track suits me very well. Now I’ve made it all the way into Q4 in my first year in the DTM, which is a very difficult thing to do because all the drivers in this championship are very good. Q4 is fantastic. My thanks go to Audi and to Abt Sportsline, who helped me very much. “

Mattias Ekström (Red Bull Audi A4 DTM #5), grid position 5
“The car felt good. In Q3 I went closer to the limit than in Q2 and I made two small mistakes in the process. That was enough not to drive a really perfect lap. That’s all I can say about this result.”

Oliver Jarvis (Tabac Original Audi A4 DTM #2), grid position 6
“In Q1 I was struggling a little but I made it into Q2. On my second set of tires in Q2 I was particularly pleased and the car’s balance was very good. In Q3 I made a mistake in the chicane and one of the wheels locked. That must have cost me about two tenths. Maybe fourth place would have been possible today but no more than that.”

Mike Rockenfeller (S line Audi A4 DTM #10), grid position 9
“Actually, everything was perfect at first. I did Q1 on one set of tires. In Q2 my first lap was very good as well. Then Alex (Prémat) spun in front of me and I had to go to the pits. On the second set of tires my lap was pretty good but a couple of hundredths too slow to make it into Q3. The car was perfect and the team did a good job. But in the end we didn’t nail it down completely.”

Martin Tomczyk (Red Bull Cola Audi A4 DTM #6), grid position 10
“The car was okay, but I didn’t get my act together. That’s a real shame. Maybe the beginning of the season is still taking its toll on me. A lot went wrong in the first few races. We’ve got to concentrate and work on this and start from scratch again.”

Markus Winkelhock (Playboy/GW:plus Audi A4 DTM #14), grid position 12
“I’m not completely pleased with twelfth place. Things were going pretty well at first. At the end the car wasn’t feeling all that bad but the time was simply not good enough. I had some problems with traction out of the tight corners. I still don’t know why that was the case.”

Alexandre Prémat (TV Movie Audi A4 DTM #9), grid position 13
“My qualifying looked very spectacular. And it was really a shame that I didn’t make it into Q3. On a super-fast lap I drove a very good first and second sector. Unfortunately, I braked one or two meters too late in the second last corner. Then the rear of the car got out of control. I wasn’t able to make good use of the next set of tires because I didn’t catch a free lap any more.”

Katherine Legge (Glamour Audi A4 DTM #15), grid position 15
“Unfortunately, my qualifying wasn’t good at all. I gave away at least half a second per lap, but don’t know where. The car was feeling good and I didn’t make any big mistakes. We’re really puzzled and need to analyze a lot of things.”

Hans-Jürgen Abt (Team Director Audi Sport Team Abt Sportsline)
“We can be pleased. Everything was very tight. I’m sorry for Mattias Ekström who was eliminated by a narrow margin. But Timo Scheider’s pole position is a good sign, for him too. It was very important that things went the way they did today. That boosts our spirits. Miguel (Molina) did an incredible job. We can only take our hats off to him for having posted such a good time in a year-old car and outperforming his other team colleagues.”

Ernst Moser (Team Director Audi Sport Team Phoenix)
“We worked on making it into Q3. We came very close to achieving this aim. Both drivers could have done it. When you try to squeeze out the last tenths small mistakes will happen. That’s only human. And that was exactly the thing that kept us from moving forward. We’re pretty quick here, also in terms of our race set-up. That’s why we need to close the book on the qualifying result and try and move as far forward as possible on Sunday.”

Arno Zensen (Team Director Audi Sport Team Rosberg)
“Katherine (Legge) will start from position 15 because Susie Stoddart will be moved back by five positions on the grid. That was a pretty decent performance. She almost made it into the second qualifying. But I can live with this result pretty well too. With regard to Markus (Winkelhock) I’d expected more than twelfth place. My hope was that we’d make it into Q3.”