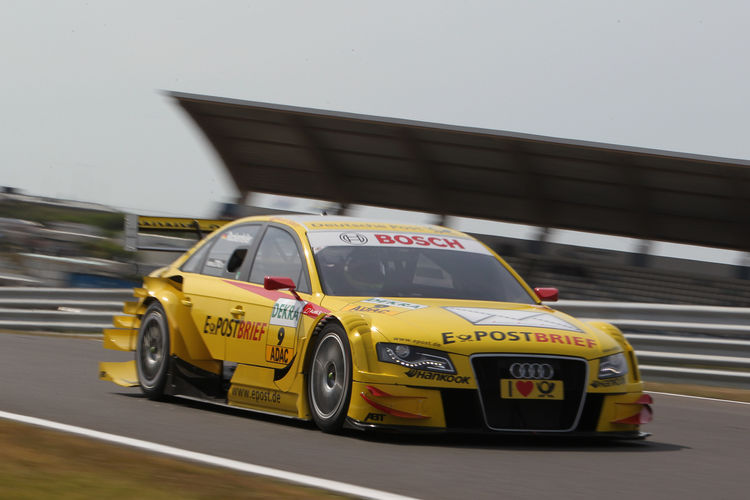 After four consecutive pole positions Audi missed the front row at the DTM race at Zandvoort by just 77 thousandths of a second. Quotes after qualifying from the Audi camp.

Dr. Wolfgang Ullrich (Head of Audi Motorsport): “I’m happy for ‘Rocky’ and Martin (Tomczyk). ‘Rocky’ has been showing a great performance so far throughout the weekend. He’s been consistently fast and in qualifying was the one we could depend on. Martin has again been very strong in his year-old car throughout the weekend and confirmed this in qualifying as well. Naturally, it’s a bit disappointing not to have a car on the front row. But last year we did, but didn’t win the race. Now we want to try and turn last year’s race result around too.”

Mike Rockenfeller (E-POSTBRIEF Audi A4 DTM #9), position 3
“I believe my performance was good. My A4 in qualifying was the best I’ve had all weekend so far. I want to thank my guys very much for preparing the car really well. At Hockenheim we were already quick in qualifying – and here we were fast again. Now we’ve got to keep the pace in tomorrow’s race as well. Today we couldn’t have achieved a much better result, so I’m happy with third place.”

Martin Tomczyk (Schaeffler Audi A4 DTM #14), position 4
“At Zandvoort, the weekend has really been extremely competitive so far. All cars were within one second of each other. At the front the situation was particularly close. That was reflected in qualifying as well. It was and will continue to be a very close battle. I’m personally pleased with my performance. On the used tires there wasn’t any more potential in the fourth session. You could also see that in ‘Rocky’s’ case. We simply didn’t have enough grip. Mercedes did a bit better in that respect. I’m hoping that Sunday will be just as thrilling as qualifying was.”

Timo Scheider (AUTO TEST Audi A4 DTM #4), position 6
“Basically speaking, there was nothing out of the ordinary for us. We had no special problems. The car was quite decent. Just in the second sector I had slight grip problems. That’s why we weren’t able to improve our times. It was a bit surprising to see the large gap to Jamie (Green). I wouldn’t have expected that. From the third row you can still achieve something. And that’s what I’ll try to do tomorrow.”

Edoardo Mortara (Playboy Audi A4 DTM #19), position 7
“Qualifying was good with position seven. The car was okay. For Q4 we were just lacking one or two tenths of a second. We started out well at Hockenheim – and here things were going even better. For the next races we want and have to improve further. But for today I’m positive.”

Miguel Molina (Red Bull Audi A4 DTM #22), position 9
“Things could be better. I made a mistake on my last lap. The situation is very close for all the drivers here. We’ve got to give our best tomorrow and score points. We now need a good strategy because our performance is right.”

Filipe Albuquerque (TV Movie Audi A4 DTM #18), position 10
“Our pace was good but we couldn’t put a real lap together. We’re talking about hundredths of seconds here. Position ten is close to Q3, and that had been my goal. Unfortunately, I didn’t quite make it. But we’ve made a big step since Hockenheim. I didn’t have any difficulties here, but I’m still lacking experience. I’ve got to become more familiar with the car in order to manage a good lap straight away and to make it into Q2 or Q3 that way.”

Oliver Jarvis (Audi Sport performance cars A4 DTM #5), position 12
“I made a small mistake, but even without it I probably wouldn’t have been in Q3. That’s disappointing because I really like the track.”

Mattias Ekström (Red Bull Audi A4 DTM #8), position 16
“It was disappointing. I’ve got to talk to my team and we need to check what happened. I didn’t make a major mistake. I was outside the performance window of my car and in that case you can quickly find yourself not being in the group of the front runners. Tomorrow will be a difficult day.”

Rahel Frey (Glamour Audi A4 DTM #15), position 18
“It was relatively difficult, but I knew that before, because this is my first race at Zandvoort. That’s why it’s natural that expectations weren’t too high. But we improved session by session in free practice. In qualifying a few minor mistakes happened due to all the excitement. But everything stayed intact, so I’m more or less pleased.”

Hans-Jürgen Abt (Team Director Audi Sport Team Abt Sportsline): “Today, we can’t be satisfied. It’s true that the situation on the whole was very close but we were simply lacking something to clinch the pole position. We were very motivated that this would work out. The team result didn’t fit. We’ve got to get past this now and try and find the best race performance so that we’ll move far to the front again.”

Ernst Moser (Team Director Audi Sport Team Phoenix): “I’m more than happy with the performance shown by Martin (Tomczyk), who finished in the top four. It was extremely close and that makes getting everything 100 percent right a real challenge. You’ve got to go out on track at the right time and manage that lap as best you can. That worked out. Unfortunately, we had to do two laps in Q3. That’s why in Q4 it was difficult to move forward any farther on this set of tires. In Rahel’s (Frey) case you can see the learning curve. As expected, it’s not easy for her. But you can see that she’s getting closer and closer.”

Arno Zensen (Team Director Audi Sport Team Rosberg): “’Well done,’ to both drivers. Qualifying was very good. Edo (Mortara) was among the top four the whole time. On his last trial he made a tiny mistake, otherwise he could have done even better. On the whole, I’m pleased with positions seven and ten. We’re right behind Timo (Scheider) and Miguel (Molina). We can build on that. I’d like to really thank the team and compliment the drivers – I’m really happy.”