Quotes after qualifying at Valencia 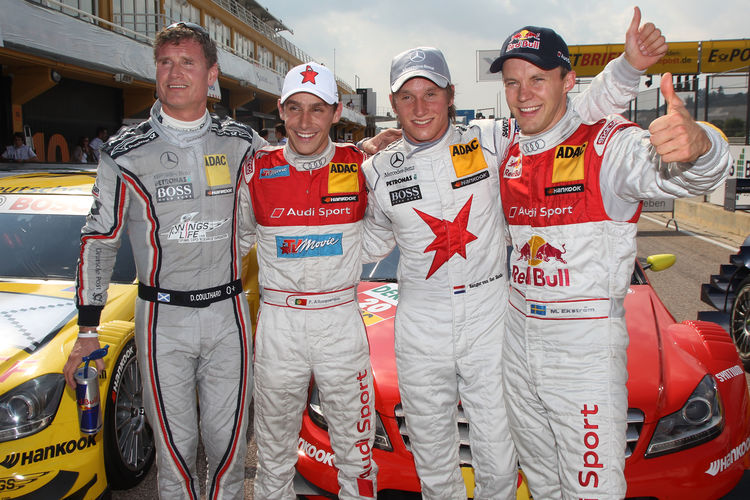 Two Audi A4 DTM cars will start from the front row of the grid into the ninth DTM round at Valencia (Sunday from 1:45 p.m. – local time – on “Das Erste”). Leader of the standings Martin Tomczyk will start into the race from the fifth row. Quotes after qualifying.

Dr. Martin Mühlmeier (Technical Director Audi Sport)
“A great result for Audi with two cars on the front row of the grid. Mattias (Ekström) and Filipe (Albuquerque) did a perfect job up to and including the fourth qualifying section. The situation was a little strange for Martin Tomczyk, who made a mistake in the second sector. Then he reduced his speed a bit. On his next lap he was only able to take tenth place. We’ve got to see what the race will bring tomorrow. Martin has to push to make up ground. He has already shown how good he is at doing that this season – most recently at Oschersleben.”

Mattias Ekström (Red Bull Audi A4 DTM), grid position 1
“My qualifying was very good. In Q3 and Q4 I managed a clean lap. In the fourth qualifying section the track was very slippery. A huge ‘thank you’ from me to my engineer Alex Stehlig, the Abt team and the guys from Audi, who gave me a perfect car. We’re in a good position for the race, but tomorrow is a new day.”

Filipe Albuquerque (TV Movie Audi A4 DTM), grid position 2
“I made it into Q4 and clinched the sensational P2 there. I’m very happy! I had a good pace in all the sessions. In Q4 I made a couple of small mistakes. That’s why I was surprised about second place. I was lacking a bit of experience in driving a qualifying lap on used tires. I really want to thank Audi Sport Team Rosberg for a fantastic car.”

Mike Rockenfeller (E-POSTBRIEF Audi A4 DTM), grid position 5
“A very difficult qualifying session: It wasn’t easy for me to find optimum balance and drive a good lap. Fifth place is not the position I wanted to be on but under these circumstances it was the maximum I was able to achieve.”

Miguel Molina (Red Bull Audi A4 DTM), grid position 6
“Qualifying went well up to Q3. But then I didn’t go out on the track at the right moment for catching a good lap. On position six we’ve still got a good starting base for the race.”

Timo Scheider (AUTO TEST Audi A4 DTM), grid position 7
“I’d been hoping for more than seventh place. But this morning on new tires I was still far away from my team-mates. In qualifying, balance was already much better. Now I’ve reduced the gap but Mattias is far ahead of all of us. We now have to look at the data and analyze what it was that he did better.”

Oliver Jarvis (Audi Sport performance cars A4 DTM), grid position 8
“I’m a bit disappointed about eighth place because we had a good car for qualifying. As late as in free practice I was still struggling. That’s why we should actually be pleased now. But in Q3 I made a mistake on the first lap and had to set my time on the second trial. Otherwise fourth or fifth place might have been possible.”

Martin Tomczyk (Schaeffler Audi A4 DTM), grid position 10
“Qualifying went pretty well in the beginning. Then the red flag came and, due to the regulations, we only had one set of tires left. I made a mistake and had to stop the lap and start again, which is not the best thing for the tires. Considering this mistake, the result was okay.”

Edoardo Mortara (Playboy Audi A4 DTM), grid position 14
“I made a mistake on my fastest lap and unfortunately lost my car. That’s disappointing because we had a good vehicle. My laps are pretty good, it’s just that sometimes I simply want too much – like today. The weekend isn’t over yet. In the race I’ll try and battle for a good result.”

Rahel Frey (Glamour Audi A4 DTM), grid position 17
“On this track you can’t really feel how the tires are working. I’m always struggling with a bit of under- and oversteer. That’s why it wasn’t easy to find the right set-up. But in the end we made a decision. I was continually able to improve from the first free practice to qualifying. I’m lacking seven tenths of a second and am on grid position 17: The DTM is definitely rough.”

Hans-Jürgen Abt (Team Director Audi Sport Team Abt Sportsline): “We’re totally happy about the result. Mattias (Ekström) today showed the good form he’s in. The whole team result for Audi is good too. We’re in a solid position for the race and of course are hoping for Martin (Tomczyk) to clinch the two points he needs to win the championship. And Mattias, too, has the chance of continuing to dream of the title. And that makes it extremely thrilling.”

Ernst Moser (Team Director Audi Sport Team Phoenix): “That was an extremely exciting qualifying session. We were struggling a bit with the conditions. They kept changing whenever the sun came out. In the various sections it was possible to drive faster in the beginning than at the end. In qualifying three we waited for a relatively long time. That was probably a mistake because the track was getting slower. We’d have liked making it into Q4. But Bruno (Spengler) is even behind Martin, so everything is still open. ‘Well done’ to Mattias Ekström. And Rahel (Frey) won the ladies’ duel in the ninth qualifying session of the season and outperformed Susie (Stoddart). Fantastic!”

Arno Zensen (Team Director Audi Sport Team Rosberg): “We’re on the front row with Filipe (Albuquerque), that’s tremendous. He was very quick throughout the weekend. In Q3 he botched the first lap and was only tenth. And taking the front row afterward on old tires is fantastic. The spin was a shame for Edo (Mortara). But when you push so hard mistakes can happen. ‘Well done’ to the whole team: The guys did a very good job.”