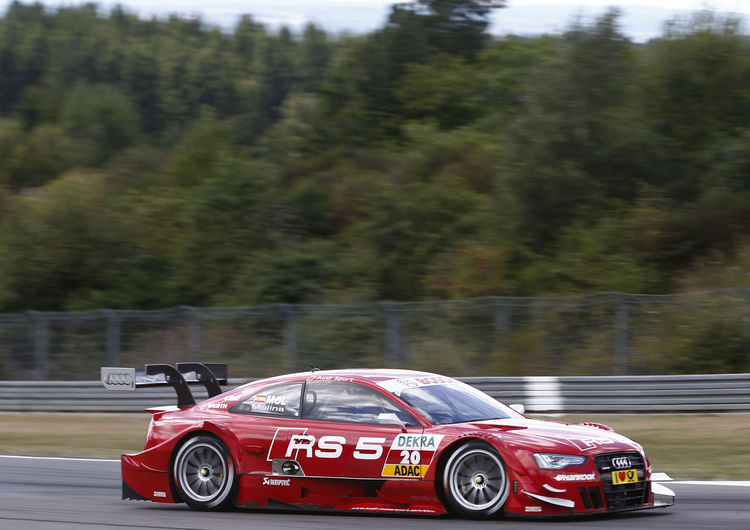 The Audi drivers Miguel Molina and Edoardo Mortara will be starting the DTM race at the Nürburgring from the second row – quotes after qualifying.

Dr. Wolfgang Ullrich (Head of Audi Motorsport): “Today we could see again how quickly the tables can turn in the DTM. The gaps are so close that the smallest details are decisive and the leader of the standings, after setting a best time in Q1, can find himself on grid position eleven. With (Bruno) Spengler right in front of him ‘Rocky’ will be in good company tomorrow ... the starting order, in general, promises a lot of suspense. None of the three top favorites is starting from the first two rows. In addition, there’s an uncertain weather forecast. These are good reasons to watch the race here in the Eifel or on TV tomorrow.”

Dieter Gass (Head of DTM): “We’ve got some mixed feelings. Obviously, we’d have liked to see ‘Rocky’ (Mike Rockenfeller) a bit further at the front. But it simply wasn’t meant to be. It was extremely close, about thousandths of a second. We were lacking a bit of fortune. The times, to some extent, were influenced by the condition of the cloud ceiling as well. But even from grid position eleven there’s something that can be done in the DTM. Bruno (Spengler) is on the row in front and Gary (Paffett) within viewing range as well. That should make a few things possible for ‘Rocky.’ For Miguel (Molina) and Edoardo (Mortara), I’m happy that they’re on the second row. Both have suffered a lot of misfortune at times this season. Today, they drove a good qualifying session and deserve having made it onto the second row. I’m hoping for them to be able to convert this on track accordingly.”

Miguel Molina (Audi RS 5 DTM), grid position 3
“I’m very happy because we did a good job today – Audi and Phoenix gave me a good car. I enjoyed qualifying very much. I was the fastest Audi driver today. I always have confidence in myself – and that was the key to continuing to work even though we had some difficult days in the past. But we kept on working consistently and the team has always had faith in me.”

Edoardo Mortara (Playboy Audi RS 5 DTM), grid position 4
“It was a good qualifying session. Fourth place is a decent starting position. Of course we’re hoping to achieve even more in the race.”

Mattias Ekström (Red Bull Audi RS 5 DTM), grid position 9
“Ninth place isn’t what I’d been wishing for. But there’s nothing we can do about it now anymore. I’m not completely happy.”

Mike Rockenfeller (Schaeffler Audi RS 5 DTM), grid position 11
“Qualifying was a bit disappointing. Naturally, I’d have liked to be a bit further at the front. Now we’re starting right in the middle of the field. In my opinion, the car wasn’t fast enough today. We’ve got make the best of it in the race.”

Jamie Green (Red Bull Audi RS 5 DTM), grid position 12
“The lap times were very close together; we barely missed the leap into Q3. On my best lap, I was slowed by Gary Paffett. We are certainly fast enough.”

Adrien Tambay (Audi ultra RS 5 DTM), grid position 14
“Having to start the race from position 14 definitely isn’t optimal. But I did give my best. It simply wasn’t possible to squeeze any more out of the car today. Hopefully, it’ll rain tomorrow.”

Filipe Albuquerque (Audi Financial Services RS 5 DTM), grid position 17
“I didn’t expect such a poor result in qualifying. I simply didn’t have any grip. Now we’ve got to analyze what went wrong.”

Timo Scheider (AUTO TEST Audi RS 5 DTM), grid position 18
“A very disappointing qualifying session for me. On the first outing, the car actually felt pretty good. Then, for the second run, we tried to refuel, but there was a problem with the fuel tank system, so we couldn’t refuel. I was able to do only one more lap – and that simply wasn’t enough. At the moment, there’s one problem right after the other and it seems as if the situation doesn’t want to get any better.”

Hans-Jürgen Abt (Team Director Audi Sport Team Abt Sportsline): “Qualifying wasn’t optimal for us. But we also knew that it would be difficult to be at the very front here. That’s why the team concentrated on being strong in the race tomorrow. Tomorrow, it’ll be important to do a good job of handling the option tires. We’ve managed to make up ground from even worse positions and move far to the front before and are hoping to be able to start a few recoveries tomorrow as well.”

Ernst Moser (Team Director Audi Sport Team Phoenix): “That was a really thrilling qualifying session. Both Phoenix Audi cars showed a good performance. It’s a shame that ‘Rocky’ (Mike Rockenfeller) was eliminated in Q2 by a narrow margin. It was about thousandths of a second. But I’m confident for tomorrow that he’ll be able to advance in the race. Miguel (Molina) did a superb job. He improved from session to session. With grid position three he broke his duck and we’re all very happy for him.”

Arno Zensen (Team Director Audi Sport Team Rosberg): “I’ve got mixed emotions. With Edoardo (Mortara) we’re on the second row of the grid. He drove fantastic times. Unfortunately, the first sector of the last segment didn’t quite fit; otherwise even more would have been possible. But I’m still happy about this result. Filipe (Albuquerque) on the other hand was eliminated in Q1 – even though he drove the best time in free practice this morning. I’m still at a loss as to why that was the case.”