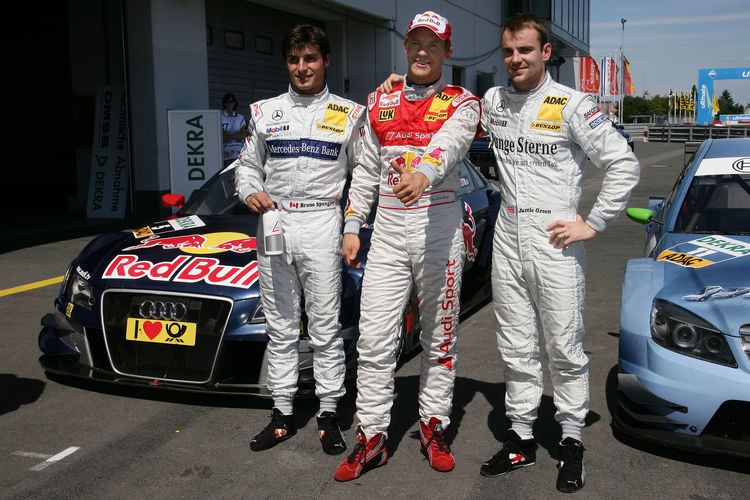 Mattias Ekström was the dominant driver in qualifying for the fifth race of the DTM season at the Nürburgring. But the Swede was the only Audi racer who was pleased with his qualifying result. Quotes from the Audi camp.

Dr. Wolfgang Ullrich (Head of Audi Motorsport)
“That was a fantastic qualifying by ‘Eki,’ who managed perfect laps in Q3 and Q4. He’s taking things into his own hands in the battle for the title – that’s the way we’ve come to know him. Mattias (Ekström) has created good prerequisites for himself in the race by clinching grid position one. And the spectators, too, can be pleased because two favorites for the championship are at the very front. It’s a little disappointing for me to see just ‘Eki’ being in front and the others not having made it. Mattias is now pretty much on his own at the front of the field. But it wouldn’t be the first time for him to manage that, too. He’s very motivated and is getting full support from us.”

Mattias Ekström (Red Bull Audi A4 DTM #5), grid position 1
“It’s always nice to clinch the pole position – but today it was a very special thing. Yesterday, this morning and at the beginning of the qualifying, as well, the car was not feeling good yet and we had to work hard. From the third qualifying segment forward my A4 was a dream to drive. It’s great to be on position one after previously having made a lot of noise complaining to the team. Now I was able to give something back to the mechanics. But of course the race is only tomorrow.”

Miguel Molina (Audi Bank A4 DTM #18), grid position 7
“A pretty good result. I made it all the way into the third qualifying and finished seventh in the end. Now I’m hoping for a good race in which I’ll be able to gather additional experience in my debut year. Obviously, I’d be happy about scoring points again.”

Timo Scheider (GW:plus/Top Service Audi A4 DTM #1), grid position 8
“In the first qualifying I had some problems with grip at the front wheels. We increased camber, which was very positive. It made the car’s balance pretty good. With second place in the second segment we were in a decent position. We were lacking a tenth to the top. But then I was starting to have a problem that had occurred before, in the morning: when braking into the chicane I wasn’t able to downshift properly. That happened to me on both laps and cost me a lot of time. Eighth place is disappointing. In Q2 we showed that we could have driven clearly faster today. So, that’s a bit of a positive trend, but not a satisfactory result.”

Oliver Jarvis (Tabac Original Audi A4 DTM #2), grid position 9
“I’m very disappointed. I was really having a hard time today. I was fortunate to survive the first qualifying. In the second segment, things were looking better. I thought it would be enough, but it wasn’t. Balance wasn’t right. The car didn’t even come close to responding the way it had in the morning, in free practice. I’m a bit at a loss as to what actually went wrong today.”

Martin Tomczyk (Red Bull Cola Audi A4 DTM #6), grid position 11
“It seems as if I had no grip at the front across all sessions. I think that’s a phenomenon of the tires. The difference between free practice and qualifying was so extreme that we didn’t even know what to work on shortly. It’s disappointing when you want to fight for the pole position and then end up in eleventh place. It’s the way it is. We’ve got to try and find something for Sunday.”

Mike Rockenfeller (S line Audi A4 DTM #10), grid position 13
“I’m simply disappointed with the result because there was so much that would have been possible. At the beginning of Q2 the track was clean and we deliberately went out early to catch a free lap. Then I came into turn one where Susie Stoddart was completely in my way. Alright, these things happen, but for me it was absolutely disappointing. In the end, when I was running on my second set of tires, there was a lot of dirt on the track. It wasn’t possible for me to drive any faster. I definitely made a small mistake on my lap as well. On the first set of tires a lot would have been possible. I went to see Susie. She didn’t even apologize but just said, ‘Welcome to the DTM.’ Maybe she doesn’t know that I’ve been driving here for as many as four years myself. There’s simply no need to destroy another driver’s lap in qualifying.”

Katherine Legge (Glamour Audi A4 DTM #15), grid position 15
“Compared with the second free practice we remained consistent. It seems like the heat had a negative effect mainly on the others. I’m very pleased with the car and improved a little myself as well. However, I never managed to catch a completely free lap. I had to leave the line once and my tires picked up a lot of rubber from others. That’s why I had to go in. Afterwards, I just had one fast lap left. If we could have driven without stopping we probably would have been quicker.”

Alexandre Prémat (TV Movie Audi A4 DTM #9), grid position 16
“That was a disappointing qualifying. I just finished in sixteenth place. In the first and second free practice things didn’t go so badly at all. I’d definitely been expecting to make it into the second qualifying at that point time, perhaps even into Q3. The first set of tires was very good. Then we changed the tires after three laps, but grip was no longer building up with them. The car had heavy understeer and I wasn’t able to adjust my driving style.”

Markus Winkelhock (Playboy/GW:plus Audi A4 DTM #14), grid position 17
“An incredibly poor qualifying. We’ve got to analyze first what happened. My Audi A4 DTM was doing great in both free practice sessions. In qualifying, the car was undrivable. I had extreme understeer and very poor traction. I don’t know why the car’s balance changed so much.”

Hans-Jürgen Abt (Team Director Audi Sport Team Abt Sportsline)
“We can be incredibly proud of the result. It was absolutely important. In a situation like this you can simply rely on Mattias Ekström. I’m overjoyed that it worked out. Everything was well done!”

Ernst Moser (Team Director Audi Sport Team Phoenix)
“Unfortunately, the tires didn’t work the way we’d learned in free practice in the morning. We didn’t make any changes to the set-up. That’s why we were completely surprised from the get go. The first set of tires was still working to some extent on both cars. And then balance was suddenly no longer okay. Both cars had really heavy understeer.”

Arno Zensen (Team Director Audi Sport Team Rosberg)
“The positive thing first: Katherine (Legge) is on position 15 and just barely missed making it into the second qualifying. That was a pretty decent result. As far as Markus (Winkelhock) is concerned: I’m at a total loss as to what happened. In the morning he was third, and in qualifying his car was undrivable on both sets of tires. A huge disappointment! We need to find out what actually happened. To some extent, the others were in the same situation – Martin Tomczyk was second in the morning and eleventh in the afternoon. I find that puzzling.”