{{ activeItem() }}
Twitter
04/02/20
Music connects people: Violinist Lisa Batiashvili, artistic director of the #Audi Summer Concerts, will give an exc… https://t.co/T0Ut4WYQ4n
04/02/20
#Audi is supporting many projects at national and international level. Audi #Hungaria will make a cash donation to… https://t.co/wBjmEWgOfs
04/02/20
We are in this together: Our subsidiary @Lamborghini produces surgical masks and protective plexiglass shields.… https://t.co/vmpdNI8PqU
04/01/20
Local #support: The international #Audi Group sites like Audi #Brussels or Audi #China are providing medical equipm… https://t.co/UjPSAJZIsj
Audi on Twitter
YouTube
03/13/20 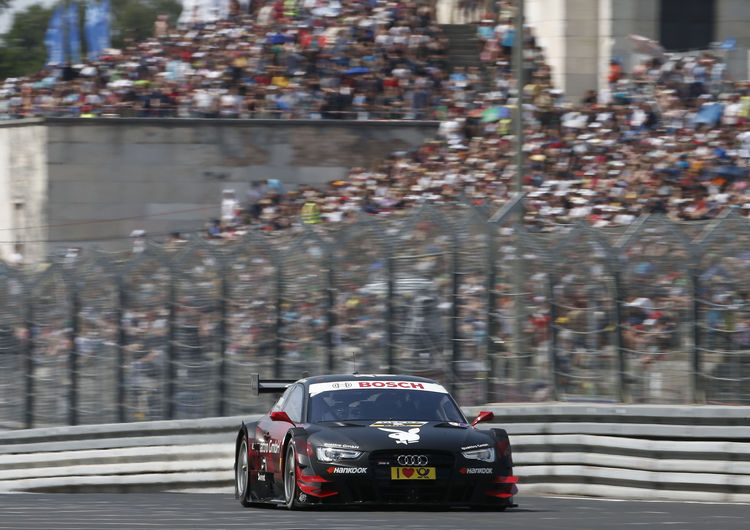 Edoardo Mortara will start the DTM race at the Norisring from the second row as the best Audi driver. Quotes after qualifying.

Dr. Wolfgang Ullrich (Head of Audi Motorsport): “The gaps were extremely narrow today even for Norisring conditions. If – like Mike Rockenfeller – you’re in 19th place with a gap of only three tenths of a second and thus are eliminated in Q1, this says everything about how close the field currently is in the DTM. But we also know that the grid positions this year aren’t quite as crucial anymore as they were in the past. That’s why anything’s still possible tomorrow. Furthermore, with Edo (Mortara) on the second row we’ve got a driver who has proven his qualities on city street circuits on numerous occasions.”

Dieter Gass (Head of DTM): “As a team, we’re in a better position than last year when we only had two cars in the top ten – and the second car only on grid position ten. Still, following the good result in free practice this morning, we’d been hoping for a bit more, especially at the top. On the other hand, we’re the only manufacturer to have managed putting a car into the top four at all five races in the first half of the season. With DRS and good option tire management, quite a bit is possible here. It’ll definitely be a tough race and I’m proceeding from the assumption that it’ll be a hard-fought one for a very long time.”

Edoardo Mortara (Playboy Audi RS 5 DTM), grid position 4
“It was a good qualifying session for me. Achieving a better result would have been difficult today. In Q3 and Q4, I had the feeling of having squeezed the maximum out of the car. We’re not completely in front yet so we’ve still got some work to do. But the gap isn’t large and that’s good. We’ve got some difficult weekends behind us on which we were competitive but didn’t get everything together completely. Now things are going better – that’s a nice result for Team Rosberg too.”

Filipe Albuquerque (Audi Financial Services RS 5 DTM), grid position 8
“It was a difficult qualifying session. I had a bit of fortune, in Q1 I was 16th, in Q2 I was running in tenth place and in the end took eighth place. The potential is there. Let’s see how the race will go.”

Mattias Ekström (Red Bull Audi RS 5 DTM), grid position 9
“In Q3, unfortunately I didn’t drive the perfect lap. And if you don’t manage that, you’re not in front in the DTM. Grid position nine is an improvement over the last races but we’re still not where we want to be. The race is very long. As always, I’m going to try and give my best.”

Adrien Tambay (Audi ultra RS 5 DTM), grid position 11
“Of course, it’s a bit of a shame that I didn’t make it into Q3. On my last lap, I came very close to setting a time of one of the best five drivers but I made a small mistake – and the Norisring doesn’t forgive even the slightest mistake. But here, anything’s possible in the race.”

Timo Scheider (AUTO TEST Audi RS 5 DTM), grid position 13
“We felt the 45 minutes we lost in the morning due to a minor problem in terms of fine-tuning. Despite this limitation we developed pretty good balance. The first and the last sector were good. Unfortunately, we lost a few tenths in the last turn.”

Jamie Green (Red Bull Audi RS 5 DTM), grid position 14
“I don’t know yet what to expect in the race. The pace in qualifying was good, as eighth place in the first qualifying segment showed. But I had problems finding a perfect lap. There’s something happening in each sector of this track. And if the set-up is less than hundred percent perfect you lack a tenth and slip toward the bottom on the time sheets.”

Mike Rockenfeller (Schaeffler Audi RS 5 DTM), grid position 19
“Unfortunately, I can’t say much today. In the first races of the season, we always got everything right in the team. Today, we weren’t where we wanted to be with the set-up. I tried everything, more wasn’t possible. But we won’t give up and will try and move forward in the race.”

Miguel Molina (Audi RS 5 DTM), grid position 22
“This wasn’t so good. I had a problem with the transmission and am starting all the way from the rear. But with a good strategy, we can drive a good race.”

Hans-Jürgen Abt (Team Director Audi Sport Team Abt Sportsline): “We can’t be totally satisfied. We’d been expecting a top-ten result for all cars. We’re hoping to have an advantage with our set-up across the long distance in the heat. Our best car is in ninth place –so nothing’s lost. But the competition is strong. Doing a good job of getting through the first turn will be important.”

Ernst Moser (Team Director Audi Sport Team Phoenix): “After the results of the roll-out and free practice we were confident to have found a good set-up. This wasn’t confirmed in qualifying. I’m hoping for the set-up to work out in the race. Starting from the rear will be difficult. Bur we’re hoping to be able to advance with a good strategy and to be scoring points.”

Arno Zensen (Team Director Audi Sport Team Rosberg): “Of course I’m very pleased. We’ve got the two best Audi cars in the field. Edo (Mortara) is in fourth place. It’s great that he made it into Q4. I can also live well with Filipe (Albuquerque) in eighth place. The guys deserve this after the misfortune of the past weeks.