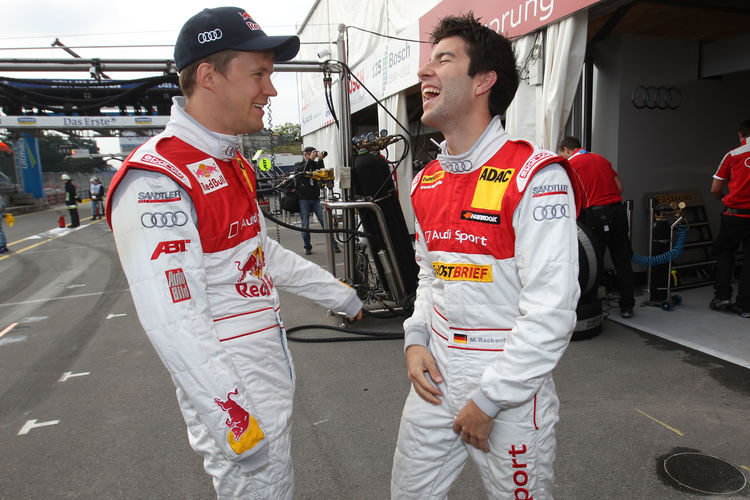 Mattias Ekström on position four was the best Audi driver in qualifying for the DTM race at the Norisring. Quotes from the Audi camp after the battle for thousandths of a second.

Dr. Wolfgang Ullrich (Head of Audi Motorsport)
“Qualifying didn’t go according to our expectations. At the Norisring we’re traditionally having a difficult time – and that was again the case in today’s qualifying although the times were very close together. Small things made the difference and we didn’t manage to get everything perfectly right. ‘Eki’ at least made it into the top four. But the race isn’t until tomorrow. We’ll be giving everything.”

Mattias Ekström (Red Bull Audi A4 DTM), grid position 4
“Fourth place is okay but far from good. Q4 was disappointing. I braked too hard in front of the first turn and didn’t have enough grip. The tires and the brakes were simply still too cold. With a good start I could manage to overtake all three Mercedes cars in front of me in the race.”

Timo Scheider (AUTO TEST Audi A4 DTM), grid position 7
“Subjectively, things were going better than they were this morning. In the last outing we went out just a tiny bit too late. This first lap was relatively okay. Unfortunately, I wasn’t able to improve any more afterwards when the first rain drops fell. Mattias (Ekström) on the other hand managed to do it and, for Norisring conditions, made a huge leap forward. I’ve got to analyze how that happened. Nothing’s lost with seventh place. At the Lausitzring we managed to move to the front after having started even farther from the rear. Why we shouldn’t be able to do that here as well?”

Edoardo Mortara (Playboy Audi A4 DTM), grid position 8
“Eighth place is a good qualifying result although a better place would have been possible because I made a few mistakes. But it was good to have made it into Q3. Being the best year-old Audi car today was a good job for us and Audi Sport Team Rosberg. Let’s see what conditions we’ll have in the race.”

Miguel Molina (Red Bull Audi A4 DTM), grid position 9
“It went better than last year. I’m pleased with that. Still, I’ve got to improve some more on this track. Qualifying was okay. The car was good. I had only minor mistakes on my lap. We know that this year the battle in qualifying is extremely close. I’m happy with ninth place nevertheless. And I believe in a good race on Sunday.”

Martin Tomczyk (Schaeffler Audi A4 DTM), grid position 10
“Things didn’t go the way we’d been planning. The tires didn’t work the way they had been so far this weekend. I wasn’t able to make use of grip from the first lap on, that’s why our strategy didn’t fit – but there was no way we could have known that before. I heard that others had that problem too. But the points are not awarded until tomorrrow. Grid position ten isn’t the best but neither the worst place. Let’s see where we’ll finish.”

Oliver Jarvis (Audi Sport performance cars A4 DTM), grid position 11
“We had a great car on Friday and also on Saturday morning and were always among the top five. The rain between the second free practice and qualifying had a major impact. We had little grip and therefore couldn’t drive any faster.”

Filipe Albuquerque (TV Movie Audi A4 DTM), grid position 16
“I’m not happy at all. The second set of tires was much better and my time kept getting better. I went all the way to the limit and my wheels locked in the last turn. Later I wasn’t able to improve any more. That’s a shame! All the times are so close and this is pretty demanding. The most difficult thing is the braking points. And to let yourself be carried out all the way up to the wall on the parallel straight is interesting and a lot of fun.”

Mike Rockenfeller (E-POSTBRIEF Audi A4 DTM), grid position 17
“I’m happy to be back on the DTM grid. But I’ve got to honestly say that things couldn’t have gone much worse today than they did. Being on the last row after having been among the top five at all the other events this year is very frustrating. I had no grip whatsoever and was much too slow. In the DTM I’ve never really done well on this track. I knew that it would be difficult but would have never thought that I’d be on the last row.”

Rahel Frey (Glamour Audi A4 DTM), grid position 18
“We had some problems yesterday in free practice. First it was raining. Starting that way at the Norisring was not easy. Later we had some problems with the suspension. But we kept on working and were able to continuously improve. For qualifying I’d expected a bit more. Still, we want to attack tomorrow.”

Hans-Jürgen Abt (Team Director Audi Sport Team Abt Sportsline): “Although the situation was very close on the whole, we can’t be satisfied with qualifying. We’d expected more. Mattias (Ekström) made mistakes in his last qualifying section. He no longer had a chance to take pole. Too bad!”

Ernst Moser (Team Director Audi Sport Team Phoenix): “As expected, it was very close. If you don’t get it right one hundred percent, then a tenth of a second is lacking. And in that case you won’t even make it into the top eight here. Unfortunately, that happened with Martin (Tomczyk. That’s too bad and frustrating but you can’t be at the front every time. Still, it’s possible to achieve a lot from position ten on the grid.”

Arno Zensen (Team Director Audi Sport Team Rosberg): “Filipe (Albuquerque) has a steep learning curve. This is his first race at the Norisring, and in the DTM at that. He didn’t do a bad job but obviously 16th place is disappointing for him. With Edo (Mortara) I’m quite happy. He was running well in all three qualifying sections. Third-best Audi, best year-old car – I can live well with that.”