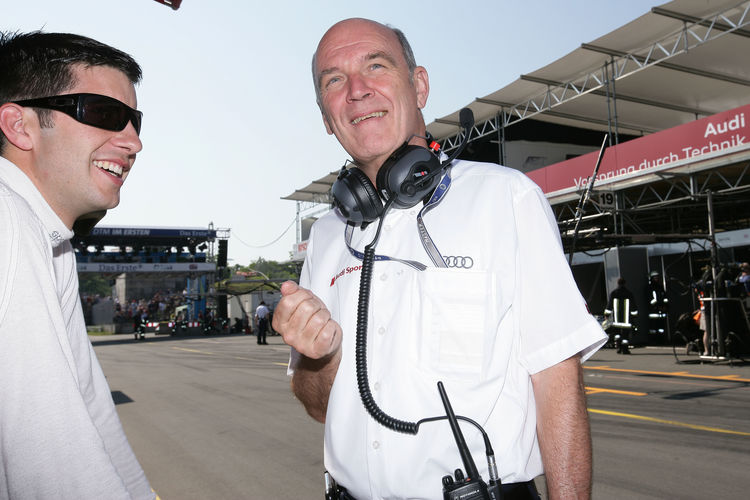 The entire field within half a second, the fastest qualifying lap but only grid position four for the best Audi A4 DTM – quotes from the Audi camp after qualifying at the Norisring (Sunday starting at 1:45 p.m. – local time – live on “Das Erste”).

Dr. Wolfgang Ullrich (Head of Audi Motorsport)
“Unfortunately, we didn’t manage to work out a better starting base for the race. It’s possible to win even from the second and third row but it’s not easy, particularly here at the Norisring. We were in a good position in both free practice sessions and had higher expectations for qualifying. But considering the extremely small time gaps and the permanently changing track conditions here simply everything has got to perfectly fit together. That was not the case with us today. We’ll try and make the best of the situation tomorrow.”

Martin Tomczyk (Red Bull Cola Audi A4 DTM #6), grid position 4
“Of course it’s a nice feeling for me to be this far at the front at the Norisring. But once you’ve made it into the final qualifying session you’d obviously like to clinch the pole position. Today that wasn’t possible because I was having difficulties searching for grip – which was pretty obvious when I slipped and even came into contact with the wall. Today Mercedes were the front runners. Tomorrow we’ll give everything to change that.”

Mattias Ekström (Red Bull Audi A4 DTM #5), grid position 5
“I’d been hoping for more than fifth place in qualifying. That was a little disappointing. The race on Sunday will be long. But starting from the third row, it’ll be more difficult than from the first.”

Oliver Jarvis (Tabac Original Audi A4 DTM #2), grid position 6
“I’m very happy with sixth place because Friday was a day to forget. We fought very hard and had to change a lot of things overnight. After this Friday and after the EuroSpeedway Lausitz it’s nice to be among the top eight again. From sixth place, anything’s possible in the race. You can definitely overtake here. But it’ll be a hot, tough race. We’ll be seeing a lot of different strategies because tire wear won’t be so heavy here.”

Timo Scheider (GW:plus/Top Service Audi A4 DTM #1), grid position 10
“We were well sorted in the practice sessions on Friday and Saturday. But in hotter weather we had a bit of difficult time. We made a change to balance and for the first time this weekend I had a problem with the rear axle. I’m a little disappointed because I’d expected a place among the top five. But if there’s just one detail that isn’t right it immediately has a major impact here at Nuremberg. Tenth place isn’t anything to write home about but thank God you can overtake here.”

Alexandre Prémat (TV Movie Audi A4 DTM #9), grid position 11
“Finishing Q1 in fourth place was really good. In the second qualifying segment we opted for just one new set of tires. That wasn’t a good solution. I think we should have used a second one. Now we’re only eleventh, unfortunately. Since the beginning of the event we’ve been showing strong performances. Actually, we should have been able to make it into Q3.”

Markus Winkelhock (Playboy/GW:plus Audi A4 DTM #14), grid position 12
“Qualifying was okay. I didn’t drive all that much in free practice and we didn’t use a new set of tires. In qualifying I used new tires for the first time. I’m pretty pleased to be the second-best driver of a 2008-spec Audi. Admittedly, twelfth place isn’t a tremendous starting base for the race. But a lot can always happen here. Maybe even points will be possible.”

Katherine Legge (Glamour Audi A4 DTM #15), grid position 15
“That was really a shame! We were just lacking two tenths to make it into the second qualifying. We lost time in the middle sector. Aside from that, we’ve got a good car.”

Mike Rockenfeller (S line Audi A4 DTM #10), grid position 16
“I’m very disappointed. But even after the free practice sessions it was clear to me that it would be very difficult. We had problems with our car. I had difficulties to perfectly brake the car. We didn’t manage to get a handle on that for qualifying either. Now we’ve got to find out the reasons and improve for Sunday. Perhaps the weather will be crazy, too, or something unusual will happen in the race.”

Miguel Molina (Audi Bank A4 DTM #18), grid position 18
“We simply weren’t competitive the whole weekend. It was a difficult qualifying for me as a Norisring rookie. On Sunday I’ll try and continue our string of race finishes. We’ll see what happens.”

Hans-Jürgen Abt (Team Director Audi Sport Team Abt Sportsline)
“For Martin (Tomczyk) I’m incredibly happy. Compared to his previous race results at Nuremberg he can be very pleased. But we’re not completely satisfied with our overall team performance. We definitely would have wished to have been on row one. Last year we started from pole and didn’t win. May it’ll work out better the other way around …”

Ernst Moser (Team Director Audi Sport Team Phoenix)
“This has been our worst qualifying result of the whole year. And, to top it off, we had very high expectations of this qualifying. We were and still are basically of the opinion that it’s possible to be among the front runners with the older cars. ‘Rocky’ has not been able to set any good times yet the whole weekend. Alex (Prémat) was always part of the front of the field. Just in Q2 we didn’t get things right and we’ve got to analyze this. With a good strategy and brakes that won’t fade a lot will still be possible in the race.”

Arno Zensen (Team Director Audi Sport Team Rosberg)
“Katherine (Legge) achieved 15th place in the first qualifying and made a mistake in the process. A better place would have been possible. So, on the one hand I’m pretty satisfied but on the other we had more potential. I’m very pleased with Markus’ (Winkelhock) twelfth place, particularly since he didn’t have a lot of practice laps. I’m optimistic for the race. A place among the top ten could be possible.”