{{ activeItem() }}
Twitter
05/25/20
Incredible #RS #performance: With the #Audi #RSQ3 and #RSQ8, every drive becomes an adventure. Which model would yo… https://t.co/B3tGyuSFGo
05/25/20
Making of #RS: Take a look behind the scenes of #development and find out how @AudiSport shapes the character of th… https://t.co/tPjT3FHQuv
05/24/20
40 years of #quattro means 40 years of participating in #championship contests. Check out the highlights from the q… https://t.co/3PNWOj5zc5
05/22/20
We are committed to #biodiversity and species protection. That's why the #Audi Environmental Foundation is involved… https://t.co/X08aYm3fcb
Audi on Twitter
YouTube
05/25/20 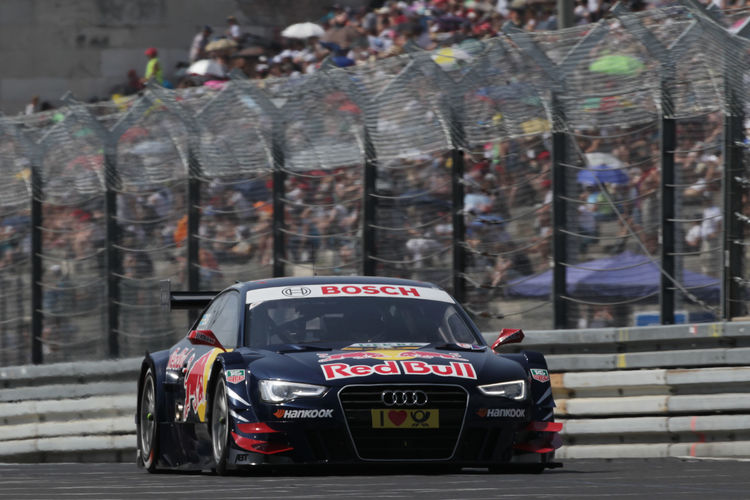 Mattias Ekström as the best Audi driver will be starting from the second row into the DTM race at the Norisring. Quotes after qualifying.

Dr. Wolfgang Ullrich (Head of Audi Motorsport): “On the whole, it was a disappointing qualifying session for us. If you want to take something positive from this, then it’s the fact that Mattias (Ekström) drove the fastest lap in qualifying. At the Norisring, everything has got to fit together perfectly – and today we didn’t achieve this in the form of the solid team performance we’ve been showing lately. But if we manage to draw on our full strength in the race again, then we’ll certainly have our say in the action at the front of the field.”

Mattias Ekström (Red Bull Audi A5 DTM), grid position 4
“The second row is okay – but that’s all. I must admit that I’m a bit disappointed because my intention was to battle for pole. Our car was good for that but in all fairness I’ve got to say that the competition was quicker at the crucial moment. Congratulations on that. But points are only awarded in the race. The large crowd of Audi fans at the track deserves the full commitment of our squad. Nothing’s lost yet but of course everything’s a lot more difficult from position four than from pole.”

Edoardo Mortara (Playboy Audi A5 DTM), grid position 10
“Qualifying was very difficult. I tried everything but more than this was not possible.”

Mike Rockenfeller (Schaeffler Audi A5 DTM), grid position 11
“As expected, it was very tight. We improved the car some more for qualifying. It was a shame not to be part of Q3. Now we’ve got to fight and drive a good race. I’m hoping that in that case we’ve got some chances.”

Adrien Tambay (Audi ultra A5 DTM), grid position 12
“Qualifying was close – as usual. We very barely missed Q3. That’s a shame because it would have been nice to reach Q3 for the third time. But grid position twelve is okay. From there I’ll be able to fight for points in the race.”

Filipe Albuquerque (TV Movie Audi A5 DTM), grid position 13
“Qualifying was difficult for everyone. We were only lacking a couple of hundredths for Q3. 13th place isn’t fantastic and wasn’t my goal either. It’ll be hard in the race but I’ll be fighting for points.”

Miguel Molina (Red Bull Audi A5 DTM), grid position 20
“Qualifying wasn’t good. I’m on grid position 20. My car wasn’t fast. We had changed the set-up for qualifying and that didn’t work out. We’re expecting a tough race. We need to wait how the weather and the heat will develop and how our tires will work.”

Timo Scheider (AUTO TEST Audi A5 DTM), grid position 21
“We’re in for a long night today in order to carefully analyze what went wrong in qualifying. The penultimate place is a huge disappointment, there’s no doubt about it. But it’s also motivation to start a recovery for the spectators tomorrow that will take us as far to the front as possible.”

Rahel Frey (E-POSTBRIEF Audi A5 DTM), grid position 22
“After free practice I was very positive. I was hoping that we’d be able to build on that in qualifying. But it didn’t work out. There was nothing working for me in qualifying.”

Hans-Jürgen Abt (Team Director Audi Sport Team Abt Sportsline): “We can’t really be happy. But we could see how close it was. The first two qualifying sessions were very good. The shoot-out in the end didn’t really work out, so before you know it you’re on the second row. But we’re going to fight in the race.”

Ernst Moser (Team Director Audi Sport Team Phoenix): “That was truly hard labor. From the first practice session on, we were still looking for the optimal set-up for the Norisring in order to squeeze out the final thousandth here. ‘Rocky’ (Mike Rockenfeller) was quite happy with the car in qualifying; unfortunately, he was lacking four thousandths for Q3. But we’re on a good track here and will continue to work on that up to the race. In Miguel’s (Molina) case we went into the same direction with the set-up. Unfortunately, he was having difficulties with the car and when that happens, you quickly find yourself on grid position 20 here. Now we’re going to work on bringing him farther toward the front in the race.”

Arno Zensen (Team Director Audi Sport Team Rosberg): “Honestly speaking, I’d been expecting a bit more. I expected that on the whole we’d be closer to the front but actually Mattias Ekström was the only one who was in contention. We were too slow and Edo Mortara had brake problems. We’ve got to analyze that.”