Quotes after qualifying at Silverstone 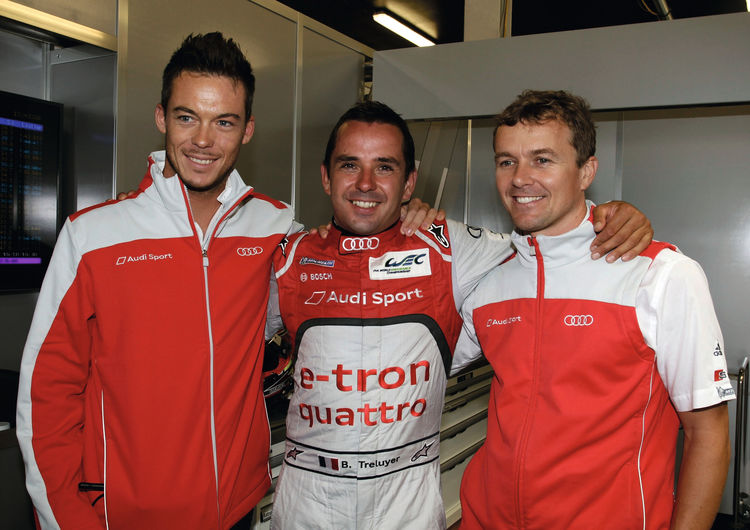 Audi will start the fourth race of the FIA World Endurance Championship (WEC) at Silverstone on Sunday (August 26, 12:00) from positions one and two.

Dieter Gass (Head of Racing Commitments): “It was very nice that at Silverstone we managed to continue the success of our colleagues at Zandvoort. We put both cars on the front positions and have done so in a session that has certainly not been easy. Qualifying started on a damp track and we had a prediction of rain for the beginning of the qualifying session. That’s why it wasn’t easy to make a tire decision. But the right decisions were made at the correct moment. That was the prerequisite for the perfect results clinched by our drivers.”

Ralf Jüttner (Technical Director Audi Sport Team Joest): “As always in such weather, qualifying was a real thriller. We started running on intermediates in order to set a time early on. Others then switched to slicks a little earlier while we were posting several good times on our tires in order to be prepared for rain, as this risk definitely existed. After taking these safeguards, we switched to slicks. ‘Well done’ to Benoît (Tréluyer) and to Allan (McNish), who are separated by just a hundredth of a second. We’ve now got a superb starting base for the race. Let’s continue like this.”

Marcel Fässler (Audi R18 e-tron quattro #1): “I watched this really exciting qualifying session from the telemetry room. The track conditions were constantly changing. In the end, it was extremely close but Ben managed a fantastic lap. Congratulations to him and the team that did a great job.”

André Lotterer (Audi R18 e-tron quattro #1): “That was extremely thrilling! And for us it was a bit stressful because Ben only started the chase for times at the very end. He drove a fantastic lap even though Allan came pretty close again. A big ‘well done’ to Ben! It’s not easy for us because we don’t know the track yet. Now I’m happy to be able to start in first place tomorrow. I’m hoping for a good race.”

Tom Kristensen (Audi R18 ultra #2): “Allan did a good job. The changes between quick and slow turns at Silverstone are challenging. In addition, you can feel the wind this weekend and the weather is keeping us on the go. That’ll be the big challenge on Sunday as well. Audi has been in front in each session throughout the weekend. I think we can expect a good race. Nobody should underestimate us even though after running in the R18 e-tron quattro we’ve still got to get used to the R18 ultra a little more.”

Allan McNish (Audi R18 ultra #2): “It was a close battle in which the weather played a part as well. The strategy was important today. The car felt excellent. It gave me a lot of confidence and even in difficult track conditions we received positive feedback. We’re only lacking a hundredth, which is negligible. We can really be pleased. We’ve got a very good race car that also feels perfect in traffic. I’m expecting a close battle.”