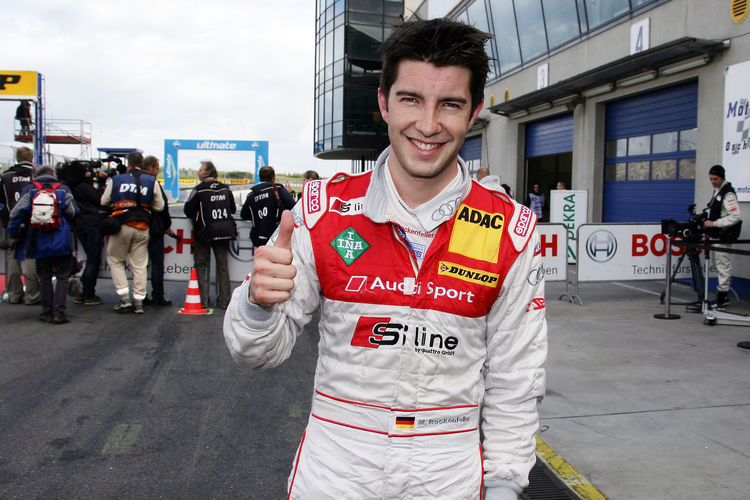 Audi showed a solid team performance in qualifying for the first DTM race at Oschersleben (Sunday, starting at 1:45 p.m. – local time – live on “Das Erste”). Quotes from the Audi camp.

Dr. Wolfgang Ullrich (Head of Audi Motorsport)
“A nice team performance! Six of our guys finished in the top eight. Unfortunately, the way things went in the qualifying of the last four wasn’t totally perfect. ‘Rocky’ managed a good lap. There wasn’t a lot more that could be done. Timo (Scheider) probably had more potential. He made a small mistake that cost him a lot of time on the back straight. That hurt a little. But with our good performance over the racing distance that we saw on Friday and our strong team performance we’re in a good position for the race.”

Mike Rockenfeller (S line Audi A4 DTM #10), grid position 3
“I’m very pleased with third place. That wasn’t to be expected after the free practice sessions. My car didn’t have enough grip. It was difficult to really take advantage of the optimal point of the tires. A huge ‘thank you’ from me to the team for doing a superb job. We made two minor changes before qualifying. That paid off well. I was able to get the laps together at the right time. It’s nice to have a very good qualifying again for a change.”

Timo Scheider (GW:plus/Top Service Audi A4 DTM #1), grid position 4
“In Q4 I was a little over-ambitious in the back chicane. The car set off extremely so I missed the apex on the back straight. This caused me to lose three and a half tenths of a second right in a turn. That’s disappointing. But if you’re shooting for the maximum such mistakes can happen. It could have been worse, though. We’re on the second row. Anything’s possible.”

Martin Tomczyk (Red Bull Cola Audi A4 DTM #6), grid position 5
“Things were going better for me here than they had in the past races. This started as early as in the free practice sessions. Qualifying was good too. Of course it’s a bit of a shame that I didn’t finish in the top four. Unfortunately I made a small mistake in the very last turn. Up to that point the time on my digital display was looking very good. I’m happy to have joined the group of front runners again after three fair to middling qualifying events. Since the races have been going pretty well for me recently I’m hoping that I’ll again manage this on Sunday.”

Mattias Ekström (Red Bull Audi A4 DTM #5), grid position 6
“In the end I was sixth. That was okay after I’d previously been struggling quite a bit. But obviously it’s not what we’d expected. We wanted to be at the front here. That’s why it’s disappointing. We’ve got to live with this now and make the best of it. History shows that it’s nearly impossible to overtake here. But if our pace and our strategy are right, we’ll still have a chance to make something of this result.”

Oliver Jarvis (Tabac Original Audi A4 DTM #2), grid position 7
“At least we’re among the top eight, but I’ll be honest: we’d been hoping for more here. I’d have liked to finish in the top four. With a good grid position on the fourth row we should be able to score points if we manage a good strategy and two good pit stops. Today’s result wasn’t what we’d been hoping for.”

Miguel Molina (Audi Bank A4 DTM #18), grid position 8
“Qualifying wasn’t easy because the track had changed since this morning. At least I’m again among the top eight. We need to make the best of this. We’ve got to work out a good strategy to recover some more positions.”

Alexandre Prémat (TV Movie Audi A4 DTM #9), grid position 12
“I’m very disappointed. It seems like I’m a regular candidate for positions on rows five to seven on the grid. That was a very difficult qualifying because we didn’t get the tires to warm up properly. That’s why the car’s handling was pretty tricky after it had still been very good in the morning. In Q2 it kept me from fully using the car’s potential. In the end it was about three hundredths, otherwise I’d have moved forward into another session.”

Markus Winkelhock (Playboy/GW:plus Audi A4 DTM #14), grid position 13
“With second place, the start wasn’t bad. Especially on the second set of tires the car felt good in the first qualifying segment. The lap time was right too. I entered Q2 with high hopes but then nothing was working any more. On both sets of tires I had more understeer than in Q1. The car was juddering on the front wheels. On both sets I was almost half a second slower. I think this could only be due to the tires because we didn’t change anything on the car. The track doesn’t change so quickly either. In Q1 I was still a tiny bit quicker than ‘Rocky.’ He improved by three tenths, I lost five tenths.”

Katherine Legge (Glamour Audi A4 DTM #15), grid position 18
“A big ‘thank you’ to my guys who took the car apart for me not just once but several times this weekend – even shortly before the qualifying sessions. During the roll-out everything was perfect but from the first practice session onwards we felt that there was a major problem in the powertrain. In qualifying the car felt good. Unfortunately, I’m lacking a lot of practice time. Hopefully we’ll be able to work out some more things in the warm-up on Sunday in order to be competitive in the race. I’m happy that we’ll be able to move forward now.”

Hans-Jürgen Abt (Team Director Audi Sport Team Abt Sportsline)
“It’s very disappointing because we had higher expectations today. We achieved a solid team performance but the truth is that there are two Mercedes in front of us. We’ve got to try and squeeze the final tenths out in order to look good in the race. To do so, we also need a good strategy and then we may be able to recover some places.”

Ernst Moser (Team Director Audi Sport Team Phoenix)
“We’ve never been on position three of the grid before this year. And we even had a very difficult start into the weekend during the practice sessions. Things were not going according to our plans at first. We were at odds with ourselves too. Shortly before the qualifying we broke our duck. We moved forward thanks to some minor changes – and ‘Rocky’ managed to convert them into a good result. ‘Well done and thank you’ to ‘Rocky’ and the team! Alex (Prémat) with his magenta-colored time in Q1 showed that he’s able to drive at the front of the field too. But he didn’t manage a perfect lap; that’s why he was unfortunately eliminated in Q2. But in his case the potential is evident as well.”

Arno Zensen (Team Director Audi Sport Team Rosberg)
“First of all, I’d like to sincerely thank the squad. Just before the qualifying it changed the transmission, clutch unit and prop shaft on Katherine’s car in a very short time. It was finished right in time. That worked out very well. The car was running perfectly. Congratulations to ‘Rocky.’ He’s the best Audi driver. Oschersleben obviously suits him well. He was on the podium here before, in 2007. That’ll be possible on Sunday as well. Markus (Winkelhock) was in second place in his first outing and we were very happy. We didn’t change any settings on the car. That wasn’t possible any more on the next two sets of tires.”