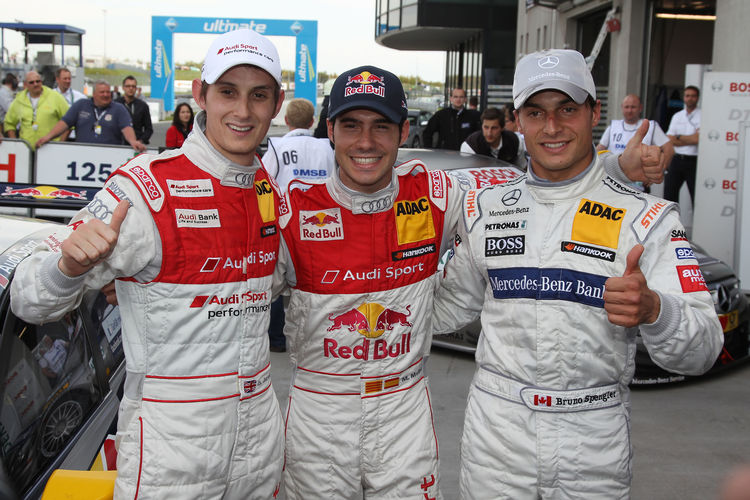 Three Audi A4 DTM will be on the two front rows of the grid in the DTM race at Oschersleben (Sunday starting at 1:45 p.m., local time, on “Das Erste”). Leader of the standings Martin Tomczyk, however, will have to solve a difficult task. Quotes after qualifying.

Dr. Wolfgang Ullrich (Head of Audi Motorsport)
“It’s nice to have three Audi cars among the top four and that Miguel (Molina) has managed to take the pole position – a perfect performance by him and his team. It hurts that Martin (Tomczyk) was already eliminated in Q1. This will make it very difficult for him tomorrow with respect to the championship. But we’re looking ahead and will try and make the best of the situation in the race.”

Miguel Molina (Red Bull Audi A4 DTM), grid position 1
“Perfect! It couldn’t be better. My first pole position! Achieving a pole in the DTM is really difficult as the competition is strong. There are so many experienced drivers. I’m happy that Audi has given me the chance to compete here.”

Oliver Jarvis (Audi Sport performance cars A4 DTM), grid position 3
“A tremendous qualifying session, we can be very pleased with third place. We squeezed the best out of the car. It’s nice to be back in front after three difficult races. And ‘well done’ to Miguel Molina.”

Mattias Ekström (Red Bull Audi A4 DTM), grid position 4
“I had a good qualifying session but I wasn’t perfect today. I can be satisfied with position four on the grid.”

Timo Scheider (AUTO TEST Audi A4 DTM), grid position 5
“We’ve made tremendous progress over the season. That was our goal. I was just lacking seven hundredths of a second for fourth place. It’s a shame that Martin (Tomczyk) didn’t have a good qualifying session today. But the season is only over after the last round at Hockenheim.”

Edoardo Mortara (Playboy Audi A4 DTM), grid position 8
“I’m very disappointed. We had difficult free practice sessions. I didn’t have a good feeling there. But in qualifying the car was fantastic. Unfortunately, I made too many mistakes in Q3. We had the chance to finish among the top four. But it didn’t work out. I still need to learn to drive under pressure. We’ll be working on the race set-up now in the warm-up.”

Mike Rockenfeller (E-POSTBRIEF Audi A4 DTM), grid position 10
“The free practice sessions went well, the car was okay. Afterward we changed a few things for qualifying and maybe I opted for the wrong direction. But the DTM field is very close together; I wasn’t far away from fifth to ninth position. But this means that sometimes it can be over early.”

Filipe Albuquerque (TV Movie Audi A4 DTM), grid position 11
“Q1 was good. Everything was feeling great but afterward the others were simply quicker. My laps and the speed were okay. Unfortunately, eleventh was the maximum. We were all closely together but I’d actually been aiming for more.”

Martin Tomczyk (Schaeffler Audi A4 DTM), grid position 14
“It’s an extreme shame to have been eliminated so early in qualifying. We made some changes between the free practice and qualifying. The car was responding very strangely and difficult to drive. It’s too bad to have a poor qualifying result particularly on this track as at Oschersleben the grid positions are crucial for the race result. We’ll be working through the night to contain the damage and to finish in the points.”

Rahel Frey (Glamour Audi A4 DTM), grid position 16
“After Brands Hatch we’d been hoping to continue that way. We’re still working on that. Oschersleben is a new track again. We’ve been struggling with grip from the beginning. The track conditions are constantly changing; sometimes we’ll have understeer and then again oversteer. In qualifying I was able to make a step forward but couldn’t close the gap all the way yet. I’m excited about the race.”

Hans-Jürgen Abt (Team Director Audi Sport Team Abt Sportsline): “We can be more than happy with this result. Miguel Molina squeezed everything out of the car and deserves the pole position. Now we’ve got to concentrate on the race because it won’t be an easy one.”

Ernst Moser (Team Director Audi Sport Team Phoenix): “We’re extremely disappointed and are now analyzing all the data. Martin Tomczyk simply had no grip. He’s on position 15, his strongest rival on P2. For the championship that’s difficult. Maybe we’ll have different weather conditions in the race; we’ve got to make the best of the situation. We were satisfied with Rahel (Frey). With a bit more of a cleaner lap she could have possibly caught Susie Stoddart.”

Arno Zensen (Team Director Audi Sport Team Rosberg): “There was more potential in qualifying and we’d also been hoping for more. But we shouldn’t forget that Mortara and Albuquerque are rookies so these things can happen. This year such mistakes are excusable.”