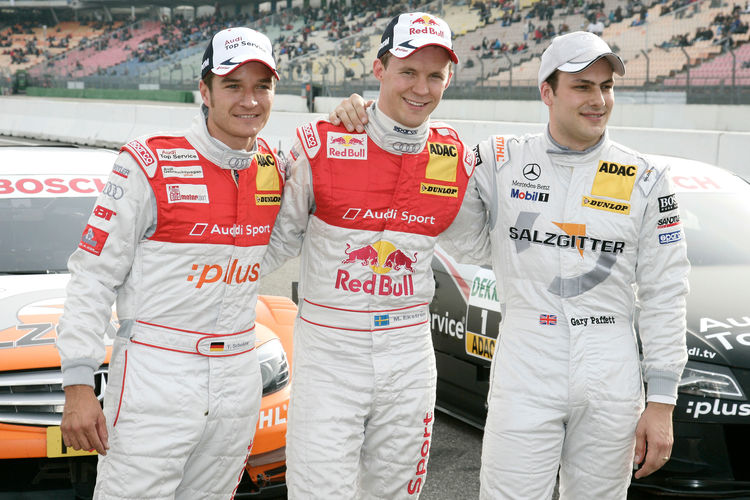 Ten races, eight pole positions – the qualifying track record of the Audi A4 in the 2009 DTM season is impressive. The eighth fastest qualifying time of the year for Audi in the finale at the Hockenheimring was contributed by Mattias Ekström. Quotes from the Audi camp after qualifying.

Dr. Wolfgang Ullrich (Head of Audi Motorsport)
“The major goal we’d set for ourselves was for Timo (Scheider) to finish among the top four. We managed that and even came close to the front row. The gaps in the end were incredibly small. Mattias Ekström on pole, Timo on position three and Gary Paffett in second place – that’s a good starting base for a very thrilling race because the two who are competing for the championship are directly together. That’s the kind of race the fans like to see.”

Mattias Ekström (Red Bull Audi A4 DTM 2009 #5), grid position 1
“I already had two pole positions this year – the first two of the season. That resulted in a track record of 13 top qualifying times for me. This number didn’t bring me any luck, though. Now, I’ve got my 14th pole position. Hopefully, my string of bad luck will now turn into a lucky streak.”

Timo Scheider (GW:plus/Top Service Audi A4 DTM 2009 #1), grid position 3
“For us, it was important not to lose contact to the front and not to experience another mistake again like we did at Dijon. The fact that I went out very early in Q3 showed that I took no risk. Instead, we even accepted the fact that the track was not as good here and there. This enabled us to show our performance and to avoid traffic as well as risks. That’s why I’m very pleased. I’m behind Gary (Paffett) on position three and was beaten by just two hundredths. That’s a good starting base for tomorrow.”

Tom Kristensen (100 Jahre Audi – A4 DTM 2009 #2), grid position 5
“It was a very interesting and close qualifying at the end of the season. Fifth place is okay. On the second lap toward the end my time came very close to the one I’d set previously, but I simply wasn’t able to drive any faster. In the final sector I felt a little obstructed. The situation could have become very tight. I don’t know how much I was lacking to still finish among the top four. Fifth place is not so bad.”

Oliver Jarvis (Audi Cup A4 DTM 2008 #15), grid position 6
“A truly good qualifying. I’m thrilled. At the end of the season, the new cars are always particularly fast. That’s why it’s great to qualify in sixth place. All sessions went well. I’m particularly happy with my time on the second set of tires in qualifying two. In Q3 we just had one set of tires left. That’s why sixth place is a good result.”

Martin Tomczyk (Red Bull Cola Audi A4 DTM 2009 #6), grid position 7
“On the whole, I was happy today. But then I made two mistakes in Q3. Once I made a braking mistake in front of the hairpin. Then I lost time on the second set of tires in the last sector. That’s too bad because I’d been planning to make it into the fourth section.”

Mike Rockenfeller (S line Audi A4 DTM 2008 #11), grid position 10
“That was a bit strange. Actually, I was out as early as after the first qualifying. But then while I was already being weighed I noticed that I’d moved up from 15th place to 14th because Mathias Lauda’s time was cancelled. I ran back and had the chance to still drive in Q2. I finished tenth and as the second-best of the year-old Audi cars. That’s nice after the disappointment in the beginning. Still, I can’t be totally pleased with my position.”

Alexandre Prémat (Audi Bank A4 DTM 2008 #14), grid position 12
“That was a very difficult qualifying. I could have been better but the inflation pressure of the rear tires wasn’t perfect. Twelfth place isn’t so bad. Now I’m hoping for a good race and a victory by Audi.”

Markus Winkelhock (Playboy Audi A4 DTM 2008 #12), grid position 13
“In qualifying one my Audi A4 DTM was okay. In qualifying two I had a little more oversteer. While exiting turns and braking, the rear of the car was floating very much. We’ve got to check why that happened. I’m not happy with 13th position. Let’s see, maybe the race will be better.”

Katherine Legge (Audi Collection A4 DTM 2008 # 21), grid position 14
“Qualifying one went well. Our pace was the same as that of the other 2008-spec Audi models. I was even among the top eight. Q2 went well too until the left rear suspension broke. That meant we couldn’t do another timed lap. I’m hoping for a better Sunday because we’re able to keep the pace.”

Hans-Jürgen Abt (Team Director Audi Sport Team Abt Sportsline)
“It was very, very close. Of course I’m happy about the pole position and Timo’s (Scheider) third place. He didn’t take any big risks. We’re happy. We’ve accomplished the first part of our mission. But that doesn’t mean anything yet. We’re in for a tough race on Sunday. Mercedes won’t give up, that’s obvious. For the fans, it’ll be a fantastic race. Mattias (Ekström) has got to stay in front; Timo doesn’t have to prove anything. Fifth place is all he needs. He’ll try to pull off a good start. If Paffett’s in front of him, he’ll just follow – so much for the theory. Let’s see what happens.”

Ernst Moser (Team Director Audi Sport Team Phoenix)
“We continued the performance we showed in spring. Oliver (Jarvis) in sixth place is driving the best year-old car. I’m very pleased. Alex (Prémat), too, almost finished in the top eight. Unfortunately, he didn’t drive a good final lap, that’s why he’s on position twelve. But the team result is very good. I’m looking forward to the race and hope that we’ll really score a lot of points.”

Arno Zensen (Team Director Audi Sport Team Rosberg)
“With ‘Rocky’ we were lucky not to have been out as early as after qualifying one. Mathias Lauda had squeezed him out. Then I asked the race director, because Mathias was too late. The race directors realized that at the same time. With ‘Rocky in tenth place I’m actually happy – but not with Markus (Winkelhock). During his final trial the tire pressure went up a bit too much.”