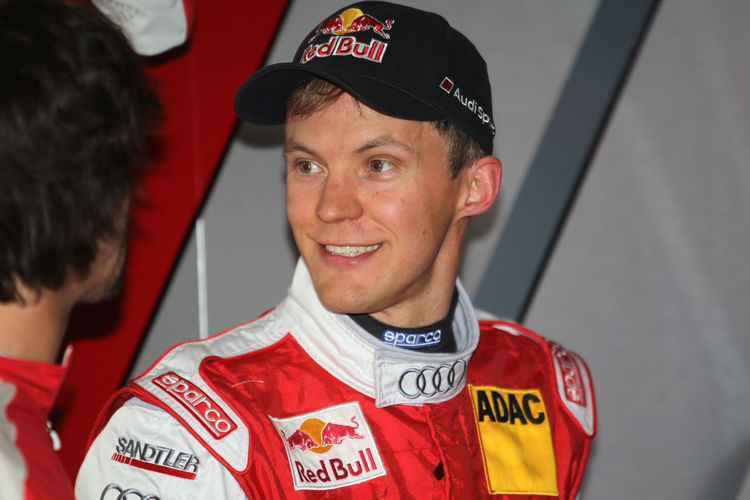 Mattias Ekström and Timo Scheider will start into the DTM season opener at Hockenheim (Sunday, starting at 1:55 p.m. – local time – live on “Das Erste”) from the two front rows. Quotes after qualifying from the Audi camp.

Dr. Wolfgang Ullrich (Head of Audi Motorsport): “Six Audi cars in the top ten are a very nice team result. We’ve got an Audi on each of the two front rows and even two on the third row. This gives us good prerequisites for the race. Qualifying was a real thriller – and I’m sure we’ll also see a thrilling race.”

Mattias Ekström (Red Bull Audi A4 DTM #8), grid position 2
“This qualifying session was a nail-biting one for our Abt squad. The car wasn’t so good at first. But every time I went out we made some changes. In the end my A4 was perfect and I managed a good lap. Naturally, I’d prefer having finished in first place but this will be my goal for tomorrow – because that’s when the points will be awarded.”

Timo Scheider (AUTO TEST Audi A4 DTM #4), grid position 4
“Things were going really well, the performance of the car was right too. In Qualifying 3, though, I had to drive two laps on one set of tires. That affected me in Q4 because the grip level was clearly lower than just after one lap. Then, while heading for the hairpin, I made a mistake to top it off. I had no choice, however, but to take the full risk. But even from the second row we’ve got every chance to be in contention.”

Mike Rockenfeller (E-POSTBRIEF Audi A4 DTM #9), grid position 5
“I’m a little disappointed, but on the other hand position five isn’t the worst place on the grid. Unfortunately, I made a mistake at the entrance to the Motodrom in Q3. I was shooting for too much. My car started understeering, I missed the line and lost one and a half tenths in the process. The way the car was performing, I could have achieved a better result. Our speed on the whole was right throughout the weekend. I’m hoping to make up some ground with a good strategy on Sunday.”

Martin Tomczyk (Schaeffler Audi A4 DTM #14), grid position 6
“On the whole, I can be happy with the overall result. Personally, though, I’m not happy at all. I made a big mistake in Q3. It kept me from making it into the fourth qualifying segment. I was among the front runners throughout and then this happens to me in Q3 of all times ...”

Miguel Molina (Red Bull Audi A4 DTM #22), grid position 8
“We had an electronic problem and were not able to do a good lap in Q3 as a result of it. Tomorrow we want to make up for this mishap. It’s an important race because it’s the first championship round and we want to score many points.”

Edoardo Mortara (Playboy Audi A4 DTM #19), grid position 10
“This was a difficult first qualifying session for me. The free practice runs didn’t go well. I made a lot of mistakes. That’s why I was lacking self-confidence in qualifying. We had the car for Q3 but it was my fault. I’ve got to gather experience and put more kilometers on the track.”

Oliver Jarvis (Audi Sport performance cars A4 DTM #5), grid position 12
“This was a poor start. I made two mistakes. On the second set of tires I made a braking mistake in the Mercedes-Arena. On the third set I had some understeer in the Motodrom and hit some dirt, which cost me four or five tenths. I think that without these mistakes I would have finished on P4 or P5.”

Filipe Albuquerque (TV Movie Audi A4 DTM #18), grid position 15
“The first set of tires was okay. The other sets felt strange, they were more difficult to drive. I didn’t manage a good lap. But driving in the DTM is fantastic. I’ve got a fascinating car and it’s an extremely competitive championship. You can quickly lose three tenths of a second and finish in 15th place – which is certainly not my goal.”

Rahel Frey (Glamour Audi A4 DTM #15), grid position 17
“Before qualifying, my heart was definitely beating a bit faster than normal. It’s great fun and it’s fantastic that I’ve been given the chance to enjoy the DTM. I feel very comfortable with Audi and the team. The guys did a great job. I’ve still got to improve some more and I’m sure I will.”

Hans-Jürgen Abt (Team Director Audi Sport Team Abt Sportsline): “It was a big thrill. It was a bit of a pity that Mattias (Ekström) made a slight mistake in the last sector. But you could see how close the field is in the DTM. That’s what the spectators want to see. For us, it’s really nerve-racking though. I’m very happy with the team results. We’ve got to be well prepared for Sunday so that we can continue this way in the race.”

Ernst Moser (Team Director Audi Sport Team Phoenix): “With Martin (Tomczyk) we were shooting for the top four and that was definitely possible. He just made a slight mistake on his final lap. We’re happy that he’s the best driver of a year-old car nevertheless. ‘Well done’ to the squad and to Martin! We’re expecting a good race pace. Anything’s possible. In Rahel’s (Frey) case it was to be expected that things would be difficult at first. Still, she clearly reduced the gap between the free practice sessions and qualifying.”

Arno Zensen (Team Director Audi Sport Team Rosberg): “Edoardo (Mortara) just missed Qualifying 3 by a couple of hundredths. If he hadn’t, who knows what else would have been possible, particularly considering that there was a misunderstanding in the morning: In free practice he used just one set of tires. He could have used two more. In qualifying ‘Edo’ encountered a problem while downshifting. Maybe he was slightly touching the gas pedal. These are things you need to learn when you’re under pressure right on your first trial. The potential was there, but expectations were very high too. Now our rookie finished in the top ten straight away – I’m pleased on the whole. In Filipe’s (Albuquerque) case we could have probably achieved more. We’ve got to analyze why things didn’t go better than they did.”