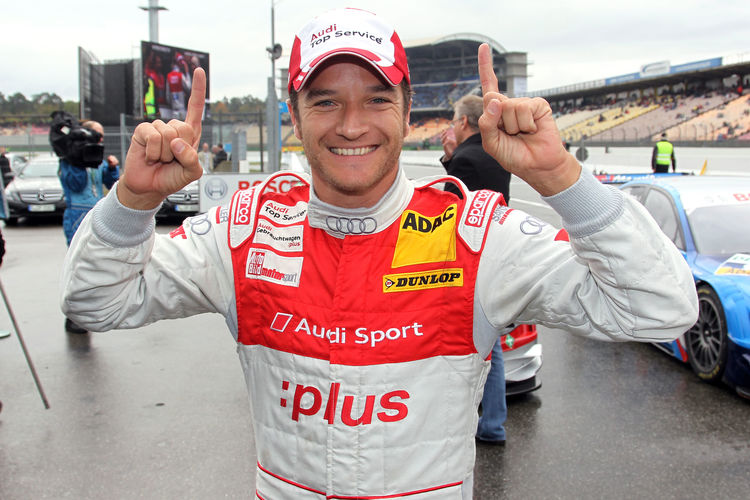 Timo Scheider and Mike Rockenfeller will start from the front row at the German finale of the DTM at the Hockenheimring on Sunday. Martin Tomczyk was moved back from sixth to eleventh place of the grid due to a violation of the rules in free practice. Quotes from the Audi camp after qualifying.

Dr. Wolfgang Ullrich (Head of Audi Motorsport)
“The track conditions in qualifying were very difficult. In general, we showed a strong team performance. That three Audi cars finished among the top four was a good beginning. Timo (Scheider) performed the magic of achieving a perfect lap. ‘Rocky’ managed a very good lap as well. We’ve got two cars on the front row. We need to convert this into a good race result on Sunday.”

Timo Scheider (GW:plus/Top Service Audi A4 DTM #1), grid position 1
“I’m overjoyed, especially after Oschersleben where we lost a possible victory due to a foreign object in the tire. It’s nice to come back after such a race and not to fall into a psychological hole. We were able to show the same performance again, albeit in wet conditions today. And, of all places, in Germany at the ‘small finale’ because here at Hockenheim I’ve experienced most of the emotions in the DTM. That’s why it feels extremely good to have shown this here again today.”

Mike Rockenfeller (S line Audi A4 DTM #10), grid position 2
“The car was superb to drive as early as in free practice. In qualifying I was missing a little of the grip I had in the morning. Still, I made it all the way into Q4. When I saw Timo’s (Scheider) lap I knew that it would be difficult for me. On the whole, I’m extremely pleased. I want to thank the team that put a great car on the track for me. I was able to convert that. It’s nice that Alexandre (Prémat) made it into Q4 too. We had a good day today, and the weather no doubt helped as well. Now we’ll try and drive a good race.”

Alexandre Prémat (TV Movie Audi A4 DTM #9), grid position 4
“A nice qualifying! I made it into Q4 and am extremely pleased. This is the best result of the year and I’m in Q4 for the first time. Now we’ve got to fully concentrate on the race in order to score many points. ‘Thank you’ to Team Phoenix that has been doing a really fantastic job since the beginning of the event. I’m very pleased with our team performance because Mike (Rockenfeller) is second, I’m fourth. On Sunday a podium result should be possible.”

Markus Winkelhock (Playboy/GW:plus Audi A4 DTM #14), grid position 6
“Being on position six isn’t bad, but a better result would have been possible. On my last lap I had to overtake Alex Prémat. I turned in a little earlier and spun in the process. I think I could have definitely improved my time. I already had an advantage of three tenths before the Sachs-Kurve. That could have been enough for Q4.”

Miguel Molina (Audi Bank A4 DTM #18), grid position 7
“This was a difficult qualifying because it was my first one in the DTM in rain. I’m among the top eight again. But on my last lap I made a mistake – I’ve got to improve some more.”

Oliver Jarvis (Tabac Original Audi A4 DTM #2), grid position 8
“I’m very disappointed. We were basically quick enough to make it at least into Q3, perhaps even into the top five. But I was the first to cross the finish line. That deprived us of our chances because we had one lap less. In the end, we were lacking half a tenth.”

Martin Tomczyk (Red Bull Cola Audi A4 DTM #6), grid position 11
“I’m not completely happy. Our plan had been to drive one lap to cool down the tires and to have one flying lap left to squeeze out the optimum. Ultimately, it turned out to be two flying laps at the end. That meant that the optimum was split between both laps and, as a result, we were short of one or two tenths.”

Mattias Ekström (Red Bull Audi A4 DTM #5), grid position 15
“I can’t remember the last time I was eliminated in Q1. It’s got to be a very long time ago. But I had no grip whatsoever and was simply not able to fight with this car. I was just skidding. A strange and disappointing feeling. It’ll be difficult to move forward from so far at the rear.”

Katherine Legge (Glamour Audi A4 DTM #15), grid position 16
“I’m disappointed because things were going very well in the rain in the morning. I’d have thought that we’d make it into the top twelve. But unfortunately I made a small mistake on my last lap which prevented me from making it into Q2. We don’t know yet what to expect for tomorrow. It could be wet, but it could also be dry.”

Hans-Jürgen Abt (Team Director Audi Sport Team Abt Sportsline)
“The team did a superb job and Timo Scheider delivered a brilliant performance. He showed an incredible lap and got everything right. That’s simply his mark of excellence. He’s in really good shape again at the moment. The situation is very close in the DTM. You’ve got to work hard, but you also need a little bit of fortune. What happens if you’re not fortunate was obvious with Mattias Ekström today.”

Ernst Moser (Team Director Audi Sport Team Phoenix)
“When you’ve got both cars in the top four you’ve simply got to be pleased. To manage a good lap, everything’s got to fit. And in that case you may stretch the limits sometimes like Alex (Prémat) did. In these weather conditions such things are forgivable. If you advance so far, through all four qualifying sessions, you did everything right each time. The guys were always out at exactly the right time. The crew was good too. Our drivers were always able to set the time on the first two laps. That was the key to success. I’m proud of the team and the drivers. We’ll make the very best out of this situation on Sunday.”

Arno Zensen (Team Director Audi Sport Team Rosberg)
“Markus (Winkelhock) did a pretty good job. It’s a shame he didn’t improve even more. On the last lap he was already three tenths better than before when he caught Prémat who was heading for the pits. That’s too bad because we could have done better. But with so many used cars from Audi at the front of the field you can’t complain. I’m happy for Markus that it worked out. It was time for him to move forward some more. Katherine (Legge) is in first place of the ladies’ classification. It was close, even though she wasn’t able to catch up with Coulthard any more. I’m not unhappy.”