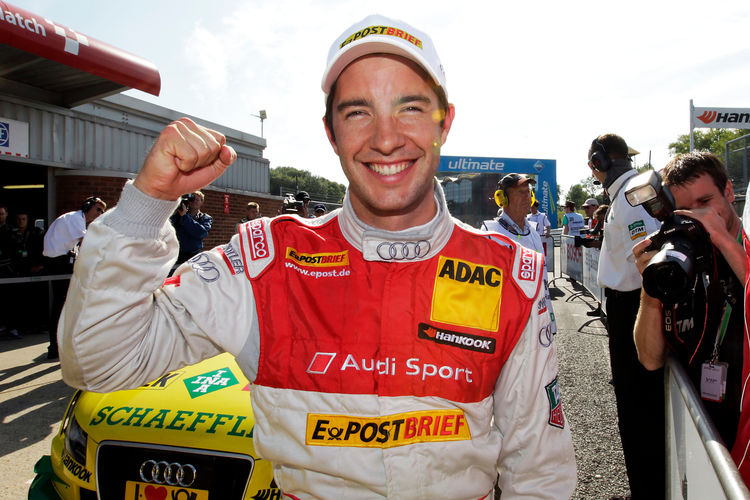 Dr. Wolfgang Ullrich (Head of Audi Motorsport)
“As expected, it was a very close qualifying session. At Brands Hatch everything has got to fit together perfectly if you want to be at the front. Naturally, it’s nice that ‘Rocky’ took the pole position for Audi and that Martin (Tomczyk) is on grid position three. That’s a very good starting base for tomorrow’s race.”

Mike Rockenfeller (E-POSTBRIEF Audi A4 DTM), grid position 1
“It’s important to have tires that are as fresh as possible in Q4. In Q3 I managed a very good first lap. That’s why we decided not to drive a second lap. The risk paid off in the end. The race tomorrow will probably be very difficult, but we’re well prepared. And for now I’m happy about pole – my first one in the DTM.”

Martin Tomczyk (Schaeffler Audi A4 DTM), grid position 3
“At Brands Hatch you’ve got to catch the right line at the right time. That’s always a big gamble! The first turn is crucial. Particularly on used tires you’ve got to catch it exactly right. I entered the turn with a lot of understeer and lost a bit of momentum. With that, it was clear that it wouldn’t be a perfect lap. I’m satisfied nevertheless. Third place is a superb starting base. And I’m happy for Mike (Rockenfeller) about his fastest time. It’s been a great day. Obviously, my aim is to finish in front of Bruno Spengler in order to make up my seven-point gap.”

Mattias Ekström (Red Bull Audi A4 DTM), grid position 5
“Fifth place is not what I’d been wishing for. But the last little detail for being in contention at the very front was missing. We had a good lap and made no mistakes. Tomorrow is a new day and we’ll continue to fight. We need a good start and maybe we can make up one position. And then we need a good pace. I like the track, it’s a small Nürburgring-Nordschleife. We’re probably in for a very interesting race.”

Miguel Molina (Red Bull Audi A4 DTM), grid position 7
“Today has shown again that the DTM is an extremely competitive championship. With seventh place, we’re very close to to the top. That’s good. I want to show a strong performance tomorrow. If things go as well as they did last year then it’ll be a good race.”

Edoardo Mortara (Playboy Audi A4 DTM), grid position 9
“It was a difficult qualifying session. I didn’t have a very good feeling with the car. Now we need to analyze what went wrong. We’ve got to wait and see what Sunday will bring.”

Timo Scheider (AUTO TEST Audi A4 DTM), grid position 12
“Disappointing! And we really weren’t in bad shape at all. The complete set-up had been changed for qualifying. That meant we were running on a harder version we hadn’t tried yet this weekend. Although it felt good we were lacking six hundredths to advance, and nine hundredths to be at the very front in this session. With such a small margin you really can’t say that something went wrong. I’m just extremely disappointed that such a few hundredths made the difference.”

Oliver Jarvis (Audi Sport performance cars A4 DTM), grid position 14
“I don’t know why we weren’t fast enough because we had no detectable problems. I like this track; that’s why qualifying was really disappointing. Two to three tenths of a second were lacking. We’re in for a difficult Sunday. I’m hoping for rain.”

Rahel Frey (Glamour Audi A4 DTM), grid position 15
“I’m very happy. Finally, the outcome was the way we’d worked it out. We managed to improve in each session and make another step forward in qualifying too. It’s the first time that I’ve been able to put it all on the track.”

Filipe Albuquerque (TV Movie Audi A4 DTM), grid position 18
“I’ve got no words to express my sadness. In turn two I braked at the same place as before but the wheels locked. But in turn two there’s no room for mistakes, I hit the grass and there was nothing I could do anymore. It’s a shame to have missed qualifying because the car was very good. After the free practice in the morning everything had looked very promising.”

Hans-Jürgen Abt (Team Director Audi Sport Team Abt Sportsline): “We’re totally happy. We worked hard for this success. ‘Rocky’ managed a superb lap and has been fast throughout the weekend. But the others were fast too. You could see how close it was. On Sunday we’re driving for victory and want to take this great result home.”

Ernst Moser (Team Director Audi Sport Team Phoenix): “It couldn’t be expected that we’d be able to improve like this with both cars. And that was true for both drivers today: Rahel’s form curve is steeply pointing upward. Taking her best sectors together, she could have outperformed some of the drivers who have been racing here for an eternity. Well done – I’m surprised and also very proud of her. Martin (Tomczyk) always had problems with the first sector this weekend, usually with the first turn. But in qualifying he got that perfectly right. He was among the top three in each session. Congratulations to him and to the team.”

Arno Zensen (Team Director Audi Sport Team Rosberg): “In free practice things were still looking very good. We could have probably done better today. That Filipe (Albuquerque) went off the track was a shame because he could have achieved quite a bit today. I’d expected more of Edo (Mortara) as well. In ninth place he just barely missed the next qualifying segment. His theoretical best time was quite a bit better. But it doesn’t do any good as the sectors have to fit together. The spin cost him a better time. On Sunday we’ll be starting behind Bruno Spengler. We want to attack him and finish in the points.”