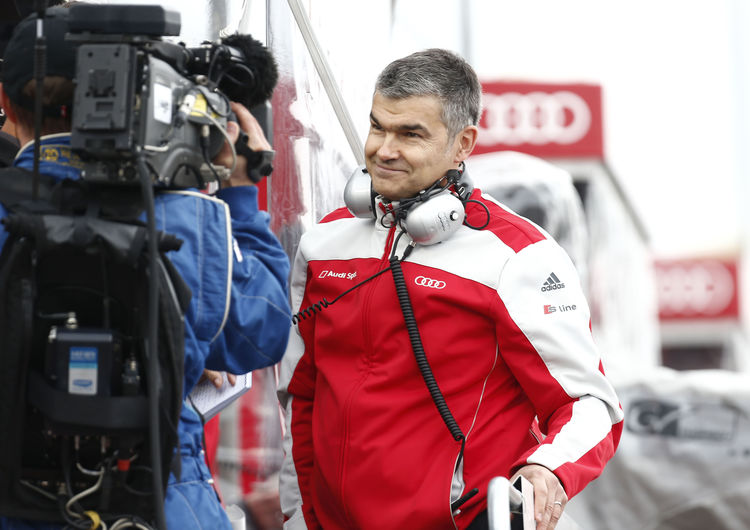 Dr. Wolfgang Ullrich (Head of Audi Motorsport): “If the situation in the race tomorrow is just as close as it was today in qualifying, the DTM fans can look forward to a real thriller. As, contrary to the original forecasts, the weather is supposed to remain dry now, so we’ll be seeing the option tires in action as well. With the short laps at Brands Hatch, making the right strategic decisions will be even more important than at Hockenheim.”

Dieter Gass (Head of DTM): “Basically, with four cars in the top ten, we improved our team result compared to Hockenheim. But I’d have wished for the two rear cars to have been a bit farther in front. ‘Rocky’ delivered a superb qualifying performance – from the beginning to the end, he was in contention at the very front in each segment. He put that on track in Q4 as well and thus deserves having clinched a place on the front row. I’m hoping that a bit more will be possible tomorrow.”

Mike Rockenfeller (Schaeffler Audi RS 5 DTM), grid position 2
“We had a good car right in free practice and in qualifying here it’s always really close. The front row on the grid is a dream. Despite having barely missed pole I’m very pleased.”

Timo Scheider (AUTO TEST Audi RS 5 DTM), grid position 6
“This morning, we already had slight problems in free practice – especially in the fast turns. We didn’t manage to completely stop that. As there were only 25 thousandths of a second lacking for Q4, it’s hard to say what the reason was. From sixth place, it’s still possible to drive a pretty decent race. At Hockenheim, I started from first place and finished in sixth, maybe here it’ll be exactly the other way around …”

Edoardo Mortara (Playboy Audi RS 5 DTM), grid position 9
“I’m a little disappointed with the way qualifying went. I had a good car. In Q3, I made two mistakes. That’s why I didn’t get beyond ninth place. I think that without the mistakes I could have easily made it into the shoot-out.”

Miguel Molina (Audi RS 5 DTM), grid position 10
“That wasn’t a bad qualifying session for me. I was in Q3. Unfortunately, I had a small mistake in my last turn. And because here at Brands Hatch the field is so close together in terms of the times, that means it’s not enough to move on. But for me it’s a big step forward compared to Hockenheim. On the whole, I’m happy.”

Adrien Tambay (Audi ultra RS 5 DTM), grid position 16
“This is definitely not the result we’d been wishing for. I damaged my car on the first lap in Q1, maybe we lost a bit there in terms of performance. I also made a small mistake in the last turn, which cost additional time and positions. That’s a real shame. Now we’ve got to do a good job of preparing ourselves and attack tomorrow.”

Jamie Green (Red Bull Audi RS 5 DTM), grid position 18
“Unfortunately, my fastest lap in Q1 was cancelled because I crossed the finish line just a tiny bit too late. Otherwise I’d have made it into Q2 – and then I’d have continued to move forward on the grid. That’s frustrating, unfortunately.”

Filipe Albuquerque (Audi Financial Services RS 5 DTM), grid position 19
“The whole weekend hasn’t been going well for me so far. In free practice, I didn’t have an optimal set-up. For qualifying, my team and I made some changes, but that didn’t improve things a lot. 19th place isn’t satisfactory. But at Hockenheim we saw that overtaking is possible in the DTM in 2013, that’s why I’m still pretty optimistic for the race.”

Hans-Jürgen Abt (Team Director Audi Sport Team Abt Sportsline): “That was really a fair-to-middling qualifying session for us. I think more would have been possible. But we were either in traffic or didn’t get the laps right on the dot. In the end, we’re well prepared for the race and are hoping to clinch a decent result.”

Ernst Moser (Team Director Audi Sport Team Phoenix): “I’m proud of my team. ‘Rocky’ and Miguel (Molina) both did a superb job. The front row is a great result for ‘Rocky.’ Miguel was very quick too. For him, more than the fifth row would have been possible – he had the potential for a place at the very front too. In the final analysis, both cars showed a superb performance and we’re taking that with us into the race now. I’m hoping for us to be in contention for victory with both cars.”

Arno Zensen (Team Director Audi Sport Team Rosberg): “After the poor result from the free practice session it was pleasing that we at least put Edoardo (Mortara) into the top ten. For him, without his mistake in the last turn, more would probably have been possible. That was a shame.”