Quotes after qualifying at Adria 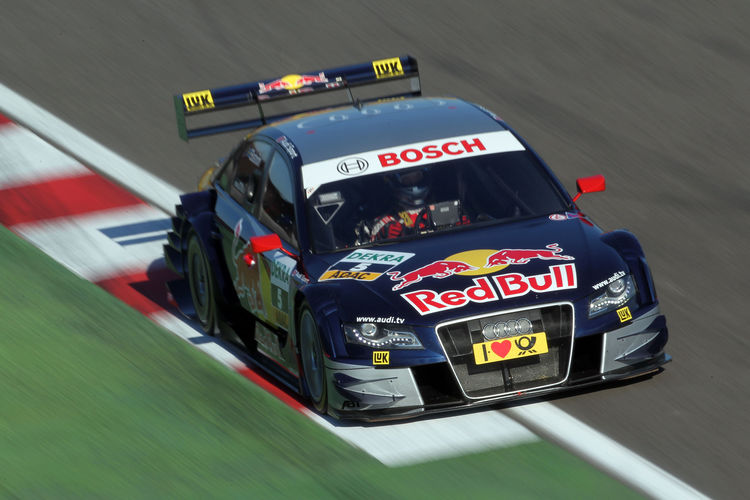 Mattias Ekström and Mike Rockenfeller were the quickest Audi drivers in qualifying for the DTM race at Adria (Sunday, starting at 1:45 p.m. on “Das Erste”). Quotes from the Audi camp.

Dr. Wolfgang Ullrich (Head of Audi Motorsport)
“We had more possibilities today. Unfortunately, there were some unnecessary risks taken as a result of which we lost one of our cars at an early stage. I’m pleased to see two drivers of our year-old cars – Mike (Rockenfeller) and Miguel (Molina) – in the top eight. The second row of Mattias (Ekström) on a track that hardly offers any overtaking opportunities is definitely not an optimal starting base – but he still has every chance of winning. And Timo (Scheider) has a car in which he can push forward from the rear. We’ll give everything tomorrow to clinch our first victory in the second half of the season.”

Mattias Ekström (Red Bull Audi A4 DTM #5), grid position 3
“It was a qualifying of mixed emotions today. I thought that I was eliminated as early as after the first section. Timo’s misfortune of having crossed the line too late was my fortune and allowed me to move into the next round. Position three is surely not bad but frustrating if you look at the small gap. Anything’s possible in the race tomorrow and the aim is clear: victory.”

Mike Rockenfeller (S line Audi A4 DTM #10), grid position 5
“It was very difficult and incredibly tight. I’m not unhappy, but not one-hundred percent happy either. A big thank you from me to the team: we perfectly timed both trials which was a crucial factor here as well. In Q3 I made a small mistake in the last turn on both of my fast laps. I want to thank everyone – fifth place isn’t so bad.”

Oliver Jarvis (Tabac Original Audi A4 DTM #2), grid position 7
“We had a good second qualifying in which I was fourth. But in Q3 we lost our balance. I just wasn’t able to set a competitive time on my fast lap. And the subsequent lap wasn’t fast enough either. I’m pretty disappointed because I’d figured on doing much better.”

Miguel Molina (Audi Bank A4 DTM #18), grid position 8
“I’m pretty pleased with this result. We clearly improved compared with the free practice in the morning. I changed my driving style a little. That paid off in qualifying. That puts us into the top eight again. Now I want to make a contribution to Audi scoring as many points as possible on Sunday.”

Martin Tomczyk (Red Bull Cola Audi A4 DTM #6), grid position 9
“That wasn’t so great. But the times were very close together today. I’d like to briefly comment on the track: it’s simply not perfectly prepared for our cars. There’s a passage where a lot of dirt hits the tarmac. More attention should have been paid to this aspect before. But the way things are, equal opportunities for everyone are not assured on every lap. Actually, a situation like this shouldn’t happen in the DTM.”

Markus Winkelhock (Playboy/GW:plus Audi A4 DTM #14), grid position 10
“In the beginning things were going well. The car didn’t feel so bad. In Q2 I was a little unfortunate. Someone drove out of the garage in front of my car. That’s why I had to stop my lap and could only set my best time on the second lap. On the third lap I was even quicker. But then a colleague drove right through the dirt at the exit of the chicane. I ran across this dirt and spun. That’s why I pitted. In any event, we could have done better. Q3 was within reach for us today.”

Alexandre Prémat (TV Movie Audi A4 DTM #9), grid position 11
“Qualifying was less than great today. Eleventh place is relatively poor. And the car felt pretty good. But I didn’t manage to get the tires to warm up and wasn’t feeling any kind of grip. In the free practice sessions this had been totally different. But when the sun comes out there’s a lot less grip on the track. I was thrown back by heavy understeer. That’s a shame!”

Timo Scheider (GW:plus/Top Service Audi A4 DTM #1), grid position 15
“After qualifying I was informed that my transponder unit had been registered one a half tenths of a second too late at the line for my last fast lap to still have been classified. This must have been a timing problem because at the beginning of my fastest lap I didn’t see a checkered flag – I only did afterward. This result is very disappointing if you’ve previously set the benchmark in the Audi ranks. It’s a shame to be eliminated so early despite showing a basically good performance. But as a team you win and lose together. I don’t want to blame anyone for sending me out too late either. On Sunday we’ll have a tough task to tackle.”

Katherine Legge (Glamour Audi A4 DTM #15), grid position 18
“I don’t know what went wrong today. The result is a huge disappointment. I wasn’t able to brake the car the way I wanted to in front of the turns. Now we need to work through our whole data.”

Hans-Jürgen Abt (Team Director Audi Sport Team Abt Sportsline)
“You could see that several things didn’t go so well with us today. But, in the end, you’ve got to look ahead to the race. The conditions will change because on Sunday the weather isn’t supposed to be as nice any more as it has been. Maybe that’ll play into our hands.”

Ernst Moser (Team Director Audi Sport Team Phoenix)
“We can be very pleased with ‘Rocky’s’ fifth place. In the Audi squad only ‘Eki’ is in front of him; all the other drivers around him are from Mercedes. It was really close. If we had been just a tiny bit quicker we’d have even moved forward into Q4. In Alex’s (Prémat) case we’ve got to analyze everything first. He was always among the top three throughout the weekend. In qualifying he then complained about heavy understeer. We weren’t able to correct that on any of his trials. That was very frustrating. Now we’ve got to look at the data and squeeze the best out of eleventh place on Sunday.”

Arno Zensen (Team Director Audi Sport Team Rosberg)
“I’m upset. Markus (Winkelhock) was doing well the whole weekend. And in the second qualifying of all times (Alexandre) Prémat drove in front of his car. That was a shame. Afterwards there was dirt on the track and that meant it was over for Markus. That’s a real shame because the potential was higher. After the free practice sessions I expected more of Katherine (Legge). Unfortunately, it didn’t materialize.”