Pure racing atmosphere at Audi’s record appearance at the Nürburgring 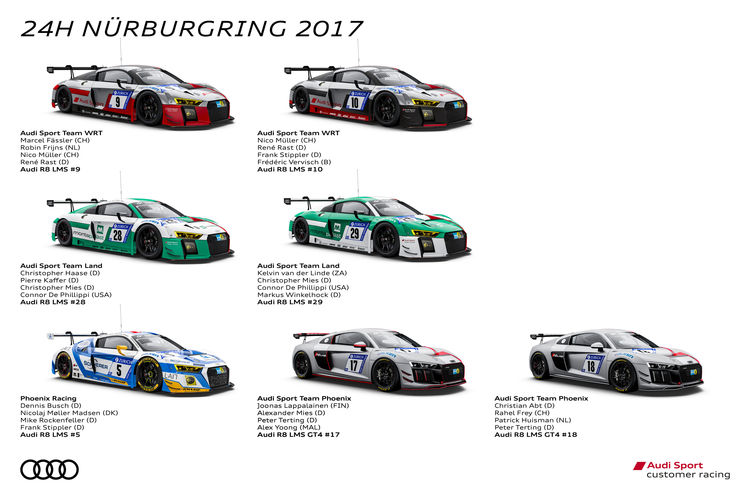 A new record for Audi at the Nürburgring: at the 24-hour race, never have more teams relied on Audi Sport customer racing’s purpose built race car. Six Audi R8 LMS, including four factory-backed models, will line up in the GT3 class. The latest customer sport project, the Audi R8 LMS GT4, will also make its race debut for the purpose of testing. Furthermore, in the TCR category, three Audi RS 3 LMS will fight for class victory in the hands of customers. In the supporting program of the event, 18 cars will compete in the Audi Sport TT Cup.

“With over 160 participants on the biggest circuit in the world, the Nürburgring 24 Hours remains at the top of the customer events for us,” says Chris Reinke, Head of Audi Sport customer racing. “The great enthusiasm for our products confirms our direction of development.” In the top SP9-GT3 class alone, teams from seven brands with 34 racing cars will fight against each other. At Audi, the factory-backed squads from Audi Sport Team Land and Audi Sport Team WRT form the spearhead. Six former race winners and six other top-class drivers will be at the wheel of a total of four Audi R8 LMS cars. Phoenix Racing – since 2014 the distance record holder on the Nürburgring Nordschleife – as well as Car Collection Motorsport will each enter another GT3 sports car from Audi. The goal: after 2012, 2014 and 2015, the Four Rings are looking to seal their fourth victory at the notorious ‘Green Hell’ of the Nürburgring.

The international motorsport spectators are eagerly awaiting the premiere of the Audi R8 LMS GT4. The model stands for the fast-growing class for gentleman drivers in worldwide GT racing. Audi Sport Team Phoenix will use two of this production-like race cars. The new Audi Sport LMS GT4 uses approximately 60 percent of the parts from the sister road model. There will also be a premiere for the Audi RS 3 LMS: it will celebrate its first ever appearance in the Eifel enduro. Audi Sport customer racing has already built 90 editions of the entry-level race car. So far, Audi customer teams have achieved various successes worldwide with this model – including a class victory at the Dubai 24 Hours in January. Team Bonk Motorsport will use two cars, whilst LMS Engineering will rely on another Audi RS 3 LMS for the endurance classic.

The Four Rings will also be strongly represented in the surroundings of the race track. As a partner of the event, Audi will provide official cars for race control. In addition, many fans can look forward to the 750-square-meter Audi Sport experience area in the paddock. In the lounge area, visitors can follow the race on a big screen. A true treat for fans are the seven racing models on show: the Le Mans sports car Audi R8, an Audi V8 DTM and an Auto Union Type D embody some of the biggest motorsport successes of the brand. In addition to this are the current Audi RS 5 DTM, R8 LMS, R8 LMS GT4 and RS 3 LMS race cars. Three high-performance models from Audi Sport round off the racing car exhibition. In addition, the Audi Sport TT Cup will entertain the fans at the weekend in the Eifel. The second of seven events will take place in the supporting program of the 24-hour race.

The spectators who are not on site can follow the race on the internet. Audi offers a comprehensive coverage on its social media platforms as well as a livestream of the entire race. The television channel RTL Nitro will broadcast the entire race live in a 26-hour program.