Premiere for Audi at the Daytona 24 Hours 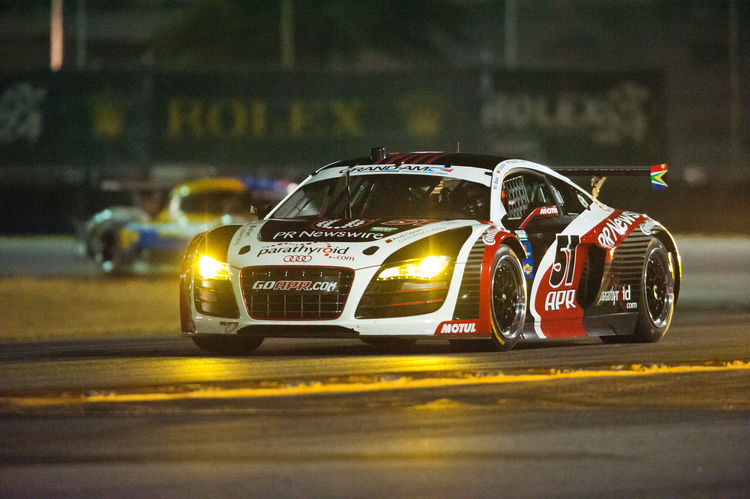 Premiere coincides with anniversary: The Audi R8 GRAND-AM will make its debut on the 50th running of the Daytona 24 Hours from January 26 to 29. Teams APR Motorsport and Oryx Racing are each fielding one of the newly developed customer sport race cars in the GT class of the endurance classic.

The “Rolex 24 at Daytona” ranks among the finest classics in international motorsport. The event has been thrilling the sports car fan community since 1962. Some of the greatest racers in history have entered their names on the winners’ list – from Jacky Ickx and Hans Herrmann through to Hurley Haywood, A. J. Foyt or Derek Bell. Reinhold Joest, the founder of Audi Sport Team Joest has personally won this classic race in Florida too. Current Audi factory driver Mike Rockenfeller decided the competition in his favor with an American team two years ago. On the event’s 50th anniversary the organizer is treating the audience to an unusual and spectacular experience. A champions party with numerous racing legends, an exhibition of historic overall-winning cars, a carnival complete with a Ferris Wheel, a 5-kilometer run on the track for all sports enthusiasts on Saturday before the race, autograph sessions and pit walks are just some of the attractions featured on the last weekend in January.

“We are proud to be part of the action for the first time at the event’s special anniversary,” stresses Werner Frowein, Managing Director of quattro GmbH, which has developed the Audi R8 GRAND-AM. “Two customer teams have already opted for our new race car and we are currently in negotiations with other buyers. Following its appearance at Daytona, the Audi R8 GRAND-AM will also be seen at the other twelve rounds of the GRAND-AM series. In the future, our customers will be directly supported by Audi of America. This presence in America is another important element of developing Audi Sport customer racing.” At the season opener, the Audi R8 GRAND-AM is competing against about 30 other vehicles in the extremely large field of the GT class while so-called Daytona prototypes are driving for overall victories. The Daytona 24 Hours marks the beginning of the 2012 GRAND-AM Road Racing season. In 2008, Audi was last represented in the United States for a whole season with a factory commitment featuring the Audi R10 TDI LMP1 sports car and won the title in the American Le Mans Series (ALMS). This was followed by only isolated sports prototype commitments at Sebring and Road Atlanta. Now the APR Motorsport and Oryx Racing customer teams are flying the colors of Audi Sport customer racing as part of their own commitment.

“Entering the GRAND-AM Rolex Sports Car Series is the biggest challenge APR Motorsport has taken on so far,” emphasizes Stephen Hooks, President of APR. “Our team prepared for this step at previous runs in the Continental Tire Sports Car Challenge. APR is known around the world as one of the leading tuners of Audi, Volkswagen, Seat and Škoda vehicles. We’re looking forward to the Audi R8 GRAND-AM with huge anticipation, our customers and fans are really excited and since the ‘Roar before the 24’ test we’ve just been dying for the 24-hour race to start. The race team based in Opelika, Alabama, headed by Jeff Mishtawy, is relying on a five-strong international driver squad. The Americans Ian Baas and Dr. Jim Norman, Nelson Canache from Venezuela, Dion von Moltke with South African roots plus former Audi factory driver Emanuele Pirro from Italy form the driver team.

Oryx Racing will compete at Daytona with team owner and driver Humaid Al Masaood from the United Arab Emirates. He will be sharing the car with his compatriot Saeed Al Mehairi and the Briton Steven Kane. “2012 is a new chapter for Oryx Racing and Arabic motorsport,” says a delighted Al Masaood. “We’re entering a new car in a series that’s new to us. It was important to us to be involved in the project right from the beginning and help continue to develop this fascinating customer racing car from Audi to become as competitive as possible.” The team hails from the United Arab Emirates and has a team base in the United States in West College Corner near Indianapolis.

After a qualifying session on Thursday the race will start on Saturday (January 28) and end on Sunday (January 29) at 15:30, local time (21:30 Central European time).