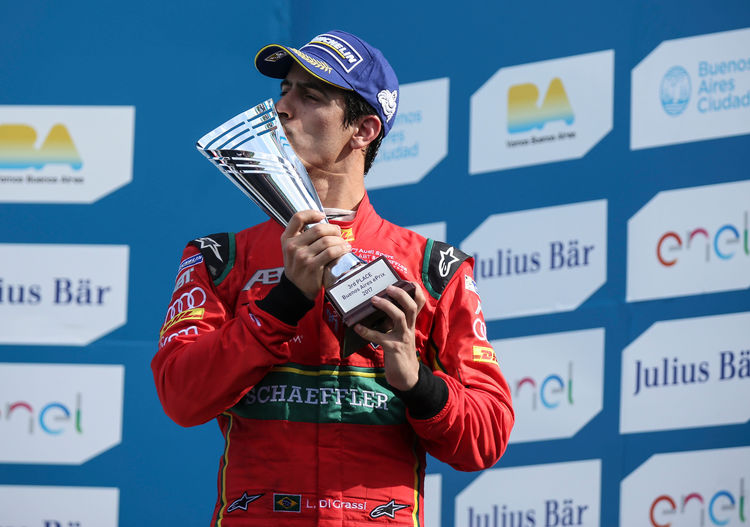 Lucas di Grassi already gave Team ABT Schaeffler Audi Sport reason to cheer in qualifying. For the first time, the Brazilian clinched the top spot on the grid in Formula E and, as a result, scored three extra points. In the race, with temperatures of nearly 30 degrees centigrade in the shade, things initially did not go as expected. Di Grassi was struggling with heavy oversteer and dropped to position five. Following the car change halfway through the race, the Brazilian was able to attack again and to claim third place on the podium.

Audi factory driver Loïc Duval in the team of Dragon Racing finished in position six. Daniel Abt, following contact with the wall in qualifying, had to settle for grid position 16. With a strong race and a good strategy of the team the young German went on to battle his way forward to position seven, securing important points for the teams’ classification as a result.

Formula E will continue in Mexico City on April 1.

In Buenos Aires, you clinched your first pole position in Formula E. Consequently, wouldn’t you have hoped for more than third place in the race?
Lucas di Grassi: “A podium was the maximum we were able to achieve. With third place in the race and pole position we scored 18 points in total. It was no doubt a good weekend for us even though we still have a lot of homework to do.”

Why weren’t you able to defend your initial lead?
“It’s obvious that the cars with a Renault powertrain in front of and behind me were faster. In addition, my first car felt pretty strange. I had relatively little grip and a lot more oversteer than expected. The only thing I could do was to wait until the car change halfway through the race. The second car then was really good. I was able to overtake Nico (Prost) and make up some ground to Jev (Jean-Eric Vergne) too. Recovering from position five to three was a top result. More than that wasn’t possible.”

You continue to rank in second place of the standings, but the gap to leader of the standings Sébastien Buemi has gotten bigger. What can you do about that?
“Seb (Buemi) was dominant last year as well. But he made some mistakes that we took advantage of. This season, he hasn’t made any mistakes in the first three races. Obviously, we’re going to continue trying to reduce the deficit to Renault. But during the season, only small improvements are possible in Formula E. You can only make a major step with a new homologation – and that exists only from year to year. We’re already working on the new powertrain for season four.”

What will be possible in the next races?
“In season three, we can only try to score as many points as possible. I’ve managed to do that pretty well so far by taking second place in Hong Kong, fifth in Marrakesh, plus the 18 points in in Buenos Aires. We have to be ready to act when the others make mistakes. In that case, we can win races as well.”

You clinched your first pole position in Formula E in Buenos Aires. Did you expect that?
“We always try to extract the maximum. The track had little grip and I managed a good lap. That it turned out to be pole position was a nice surprise. It was great putting the car on pole.”