Podium for Audi at inaugural ILMC round 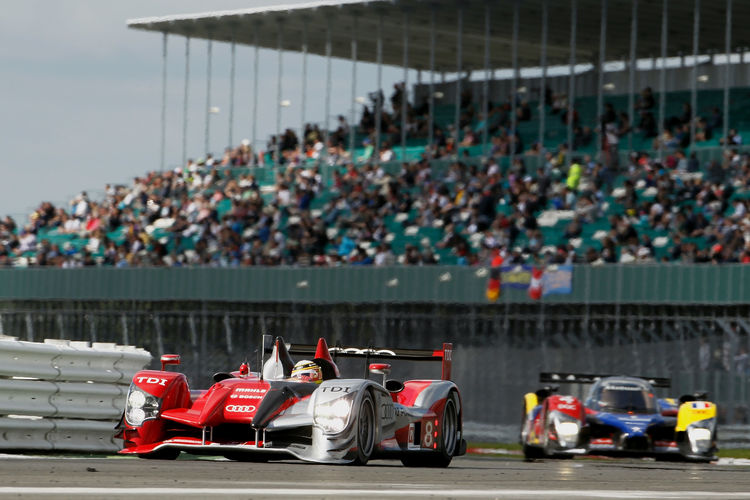 A differential failure on the sister car driven by Tom Kristensen and Allan McNish after just 15 of the 170 laps prevented a better result after the strong qualifying performance with grid positions one and two. In front of a crowd of 40,000 spectators McNish had taken the lead after starting from the pole position and fought a spectacular duel with the subsequent winner Anthony Davidson in the Peugeot in the early phase before the R15 TDI designated as car number “7” started to coast on the track without drive. It was the first retirement due to a technical failure since the launch of the R15 project and the first for Audi Sport Team Joest in more than four years.

The unusual defect on the differential, which will be carefully examined in the next few days at Audi Sport in Ingolstadt, affected the race of Timo Bernhard and Dindo Capello as well. Because the team did not want to take any risks with the tire strategy with one remaining car the tires of the second R15 TDI were changed at the first refueling stop to be on the safe side. This caused Bernhard/Capello to lose contact with the leading Peugeot that was driving two stints on one set of tires from the outset.

In addition, unusually heavy understeer caused the gap to the leading Peugeot to increase to slightly more than one minute by the end of the first half of the race. In the second half Bernhard/Capello were able to keep the pace of the front runners and to even reduce the gap to about 50 seconds. However, an additional refueling stop three laps before the finish locked third place of the German-Italion duo in concrete.

Dr. Wolfgang Ullrich (Head of Audi Motorsport): “It’s disappointing that we weren’t able to convert the good qualifying into a better race result. Unfortunately, Allan (McNish) retired very early in the race due to differential failure. We’ve never had this kind of problem before. With just one car we weren’t able to risk running double stints on one set of tires from the outset. That’s why we made an additional tire change at the beginning of the race which caused us to lose contact to some extent. We could have achieved a much better result today.”

Timo Bernhard (Audi R15 TDI #8): “This was no easy race. Especially in traffic the situation was tight. You could lose or gain a lot of time there. We didn’t make any changes to the car overnight. But the track conditions changed so much that we were struggling with understeer – particularly in traffic. I think for Dindo (Capello) and me it was the maximum we could achieve today. For Audi it was a solid start into the ILMC. And my personal summary is positive except for a small spin in traffic.”

Dindo Capello (Audi R15 TDI #8): “Our rivals were a bit quicker, particularly in traffic. We had some problems with understeer, that’s why our car wasn’t agile enough to keep up with them in traffic. That was the crucial factor. We made the maximum of the situation. We learned some more things with the new aerodynamics package and will continue to improve the car for the next race. It’s a shame that our team mates retired so early. Audi hasn’t had a technical defect in ages. And I’m sure that it won’t happen again very soon either.”

Tom Kristensen (Audi R15 TDI #7): “Of course it’s pretty disappointing to retire so early due to a technical defect. Up to that point, we had a really good weekend at Silverstone. We’ve improved the cars since Le Mans. We could see this in practice in various conditions, with our pole position in qualifying and this morning in the warm-up as well. The early phase of the race was very interesting. Allan (McNish) had some great duels with the two Peugeots, but unfortunately only for 15 laps and thus much too short. Still, we’re not disheartened and look forward to a hopefully brilliant race in less than a month at Road Atlanta.”

Allan McNish (Audi R15 TDI #7): “The early phase was exciting. I’m sure that we would have fought an intensive duel with Peugeot over the whole 1000-kilometer distance. But when I entered the new infield section after 15 laps and accelerated, I suddenly had no more propulsion. I still tried to bring the car back to the pits but unfortunately that didn’t work. We’ve won many races thanks to the typical Audi reliability, that’s why this retirement comes as a big surprise. But ’that’s racing.’ We’ll definitely strike back at Petit.”

Ralf Jüttner (Technical Director Audi Sport Team Joest): “Unfortunately, our track record today was not as good as yesterday’s. We lost one car very early with a damaged differential – even before the first stop. That was a real shame, considering that the race had actually started tremendously with a fierce fight for the top. The other car drove a good, consistent race, except for too much understeer. But the drivers got used to that as the race progressed and were able to keep up with Peugeot’s pace. At the end we had to refuel once more. So there was nothing else we could do. Congratulations to Peugeot. That was a flawless showing. We need to do some more fine-tuning in order to be able to join the fight again at Atlanta.”