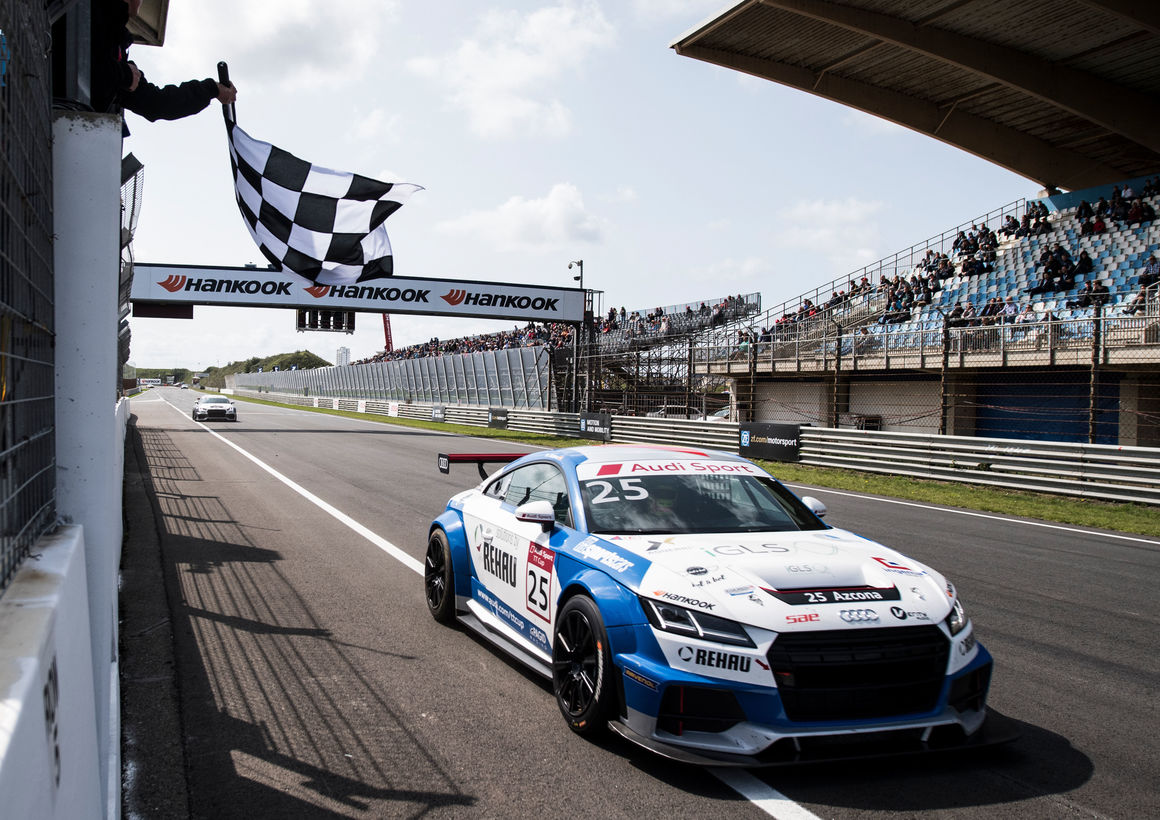 Two drivers controlled the pace again in the fourth of seven rounds of the 2017 Audi Sport TT Cup in Zandvoort: The Briton Philip Ellis and the Spaniard Mikel Azcona remain the only drivers to have so far taken victory.

Philip Ellis came to the Netherlands with a 33-point advantage and left the circuit with the exact same lead. The 24-year-old, who was born in Munich but has British citizenship, won the first race from pole position on Saturday 5.2 seconds ahead of Mikel Azcona and in doing so celebrated his fourth victory of the season. Third place in this race went to Tommaso Mosca, the best rookie in the field.

The next day, the Italian started from pole for the first time in the Audi Sport TT Cup. In an exciting race, Mosca defended the lead for nine laps until he was eventually overcome by the attacks from Mikel Azcona. The Spaniard celebrated his third victory of the season, crossing the line 0.8 seconds in front of Ellis.

The action going on behind provided some spectacular battles. As the race progressed, Mosca’s handling of the car got worse and worse, consequently falling back to fifth place. Fabian Vettel, who started from ninth, at first increasingly got the best out of his car and fought for a podium place in the final laps. However, due to a technical issue he fell back to tenth. The Australian Drew Ridge overworked his tires and therefore dropped down the order from fourth to sixth.

Keagan Masters seized this good opportunity. The South African drove from fifth to third and thus stood on the podium for the first time in the Audi Sport TT Cup. Right behind him came Milan Dontje. From eleventh on the grid, he improved by seven positions in his home race in the dunes. In doing so, the Dutchman delivered the best fight-back out of all the competitors in this race. His compatriot Giedo van der Garde was the best guest driver on both Saturday and Sunday. The former Formula 1 driver reached twelfth and seventh place respectively. Another guest driver, Daniel Roesner, was also happy. Instead of in action-scenes in the “Alarm für Cobra 11” TV show, the actor proved his skills behind the wheel of the 340 hp cup car, finishing in 15th place on Saturday and 14th on Sunday. He was thus the second-best guest driver each time.

“We have had a great race weekend in Zandvoort,” said Philipp Mondelaers, Project Manager of the Audi Sport TT Cup. “The battles on Sunday in particular captivated the spectators at the track. There was an incredible number of overtaking maneuvers – you didn’t know where to look. This is one-make cup racing at its best, and it’s why the fans love it. Meanwhile, Philip Ellis and Mikel Azcona have prevailed once again and have consolidated their outstanding positions. We also had a new face on the podium in Keagan Masters.”

In three weeks, the junior talents continue their fight for points and trophies at the fifth of seven rounds from September 8 to 10 at the Nürburgring.