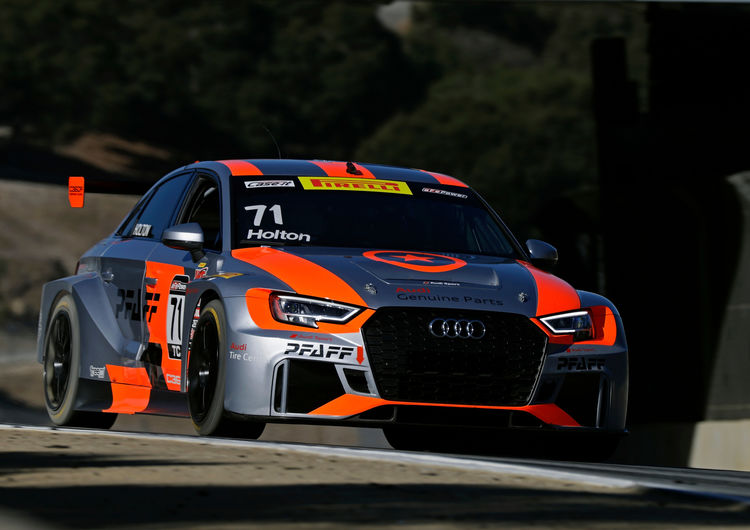 Title success with two victories: Paul Holton won the TC class title in the Audi RS 3 LMS in the finale of the Pirelli World Challenge. Three days after his 21st birthday, he delivered an impeccable performance at Laguna Seca. With Team C360R he secured the top spot on the grid twice, won both races and posted the fastest lap time in each of them as well. With that, the junior driver from Orlando, Florida, who was still racing as a rookie in the Audi Sport TT Cup in Germany last year, achieved the first title win of the Audi RS 3 LMS in North America. The first-ever title win in the customer racing touring car’s debut season had been celebrated three weeks earlier by Dmitry Bragin in the TCR Russia.

Third place in finale: Audi Team DreamDrive finished the 2017 season in the Super Taikyu series on podium. In the Japanese club sport racing series, Shozo Tagahara, Takuya Shirasaka and Naoto Takeda in the Audi RS 3 LMS on the circuit at Okayama took third place in their class. In the final classification of the series, Birth Racing Project remained the brand’s best-placed customer team, coming third with an Audi RS 3 LMS in the ST-TCR category.

Title success in class and “vice championship” win in Asia: Audi’s customer teams were instantly among the front runners in the inaugural Blancpain GT Series Asia season. In the Asian GT racing series, OD Racing Team with Indian Aditya Patel and Mitchell Gilbert from Malaysia in the finale at Zhejiang won both races in the Audi R8 LMS. As a result, Audi remained unbeaten five times in twelve races this season. While Patel/Gilbert ultimately missed the title in the overall classification by just one point, Marchy Lee and Shaun Thong with Team Audi Hong Kong won the series’ Silver Cup classification in front of Patel/Gilbert. Lee/Thong had traveled to China as leaders of the standings but a rival touched the Audi R8 LMS of the two campaigners from Hong Kong in the final race. The car spun and Thong dropped to position twelve. Together with Lee, who took over the car at the pit stop, he fought back to sixth place.

Title and two victories in China GT Championship: Xu Jia together with his teammate, Dries Vanthoor, won race one in the finale at Zhejiang. In race two, the Chinese-Belgian driver duo in the Audi R8 LMS from Kings Racing took third place. As a result, driver and team principal Xu Jia won his home GT championship. Victory in race two went to Kings Racing as well. Wang Liang/Martin Rump prevailed with a 5.7-second advantage in the final race, which meant that Kings Racing won the teams’ classification as well.

Two end-of-season class victories: Two teams from Audi Sport customer racing won their class in the finale of the Spezial Tourenwagen Trophy. Andreas Schmidt in his Audi R8 LMS ultra prevailed in class 2 in the first race at the Nürburgring. In race two, class victory went to Car Collection Motorsport with Dimitri Parhofer/Peter Schmidt in the Audi R8 LMS in front of Andreas Schmidt.