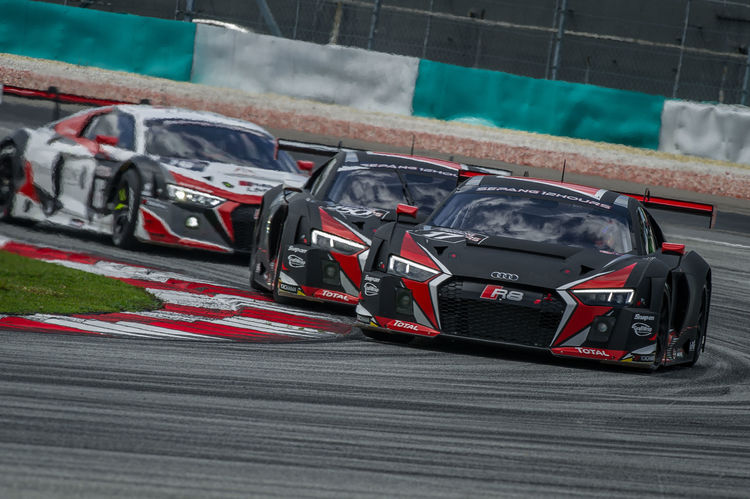 The weather in Malaysia made for a dramatic race. Two cloud bursts initially forced race control to interrupt the competition for an hour and 46 minutes and subsequently for another 53 minutes. As afterwards the participants started behind the safety car without the previous gaps being taken into account, thrilling position battles repeatedly ensued. As a result, two hours before the end of the race, the four fastest entrants were again lying within just four seconds of each other.

At this stage, the Belgian Audi Club Team WRT gained an advantage by making its pit stops within a caution period so that only little time was lost. Laurens Vanthoor took the lead while, following the driver change, the sister car of Christopher Mies initially failed to start and lost 46 seconds in the process. Mies began a recovery in rain, overtook Nicki Thiim and, on the final pit stop lap, took the lead. Vanthoor received fresh tires at this time and, as a result, took the lead again 39 minutes before the end of the race. With that, the Belgian Audi Club Team WRT secured a one-two result and Stéphane Ortelli won his last race for Audi Sport customer racing.

For the Belgian squad of Vincent Vosse, this marked the next major success. In April, the team took the Audi R8 LMS to its first race victory in a 4-hour race at the Nürburgring and won the 24-hour race at the same venue in May. Now, at Sepang, the production-based race car, 50 percent of which is based on the road-going model, again proved its performance capability and reliability.

“Sincere congratulations to our three squads on the podium,” said Romolo Liebchen, Head of Audi Sport customer racing. “In 2010 and 2011, we finished this race as the runners-up and now we’ve won it. With that, we’re closing a very successful first season of the new Audi R8 LMS with a dream result before our customers will be battling for success on four continents with a total of up to 50 Audi GT3 sports cars next year.”

In sixth place, Marchy Lee/Shaun Thong/Alex Yoong (HK/HK/MAL) crossed the finish line for Audi Hong Kong powered by Phoenix Racing Asia in Malaysia. Team B-Quik Racing with Daniel Bilski/Henk Kiks/Peter Kox (AUS/NL/NL) in the first-generation Audi R8 LMS achieved third place in the GTC class for Cup cars. The squad from Thailand had initially led the race in their class, but then lost 18 minutes due to a sensor issue.