No happy end for Audi and EKS in Canada

{{ activeItem() }}
Twitter
05/08/21
Good morning and welcome to RACE DAY in Monaco. &gt;&gt; https://t.co/ktQ0jleme7 #FutureIsAnAttitude #ABBFormulaE… https://t.co/YOxAsi5Pxm
05/08/21
Yasser Shahin and @GarthTander won their class with the #777 Audi R8 LMS in the opening @GTWorldChAUS race at… https://t.co/j9kjuX1rAK
05/07/21
Tomorrow: RACE DAY. &gt;&gt; https://t.co/ktQ0jleme7 #FutureIsAnAttitude #ABBFormulaE #FormulaE #MonacoEPrix #etron… https://t.co/NEQMG4yCbG
05/07/21
“It’s much better the full Grand Prix circuit for the Gen 2 car. Formula E is really suited to this type of track.”… https://t.co/tIrXAZgncj
Audi Sport on Twitter
{{ activeItem() }}
Facebook
05/07/21
Straight from home to the track: Lucas Di Grassi in Monaco with the Audi RS e-tron GT*. The ABB Formula E Monaco E-Prix begins at 16:04 CEST on Saturday, May 8. >> audi.com/FormulaE #Audi #etronGT #FutureIsAnAttitude #MonacoEPrix -------------------- *Power consumption combined: 20.2-19.3 kWh/100km (NEDC); 22.5-20.6 kWh/100km (WLTP); CO2 emissions combined: 0 g/km. Information on fuel/electricity consumption and CO2 emissions in ranges depending on the equipment and accessories of the car. Further information: www.audi.com/dat.
05/06/21
Traveling through time with our history at the ADAC TOTAL 24h-Rennen Nürburgring: Join us on looking back at each of our five overall victories, starting the journey with our maiden victory in 2012. Audi Sport driver Frank Stippler recalls the race when he and his teammates won the 24-hour classic at the Nürburgring Nordschleife. #PerformanceIsAnAttitude #24hNBR
05/05/21
Monaco has hosted the ABB Formula E three times so far. Our highlights include two runner-up finishes for Lucas Di Grassi in 2015 and 2017. The 2021 Monaco E-Prix will take place on Saturday, May 8. >> audi.com/FormulaE #FutureIsAnAttitude #MonacoEPrix
05/03/21
Two podiums and the championship lead for Audi Sport Italia at Autodromo Nazionale Monza highlighted the past race weekend for our customers worldwide. Well done to all! 🇮🇹 🇦🇺 🇺🇸 >> audi.com/GT3 >> audi.com/TCR #PerformanceIsAnAttitude
Audi Sport on Facebook 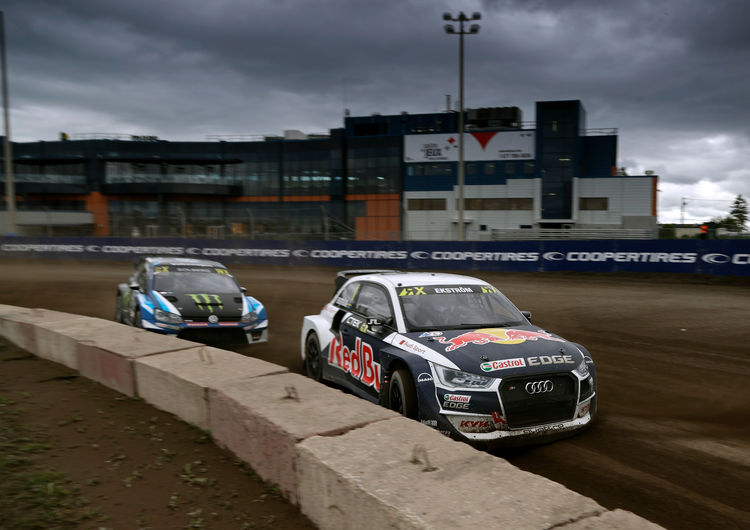 Toomas Heikkinen continued his streak in the eighth round of FIA World Rallycross Championship in Trois-Rivières by reaching the final in Canada for the fourth time in succession – a record. Any hopes of a podium finish were however destroyed by a slow puncture. The Finn was fifth in the end. Mattias Ekström was forced to retire in the semi-final with clutch problems. In the overall standings, the reigning Rallycross World Champion still holds third – as does EKS in the teams’ classification.

In the only overseas race, torrential rain transformed the street circuit into a lake and quagmire on Saturday. Toomas Heikkinen and Mattias Ekström defied the adverse conditions to hold second and fourth place respectively after the first day. “Saturday was a good start, even if we didn’t have the paces of the two Polos of Johan Kristoffersson and Petter Solberg,” said Ekström. “Things also started very well on Sunday in the dry.” The Swede had qualified third for the final races for the best twelve drivers, and started from the front row. A problem with the clutch initially dropped him back, before he had to park his Audi S1 EKS RX quattro on the penultimate lap without drive. “A good weekend until the semi-final,” summarized Ekström.

After finishing second in the semi-final, Heikkinen reached the final in Canada for the fourth time in succession. The Finn was on course for a podium finish before he dropped back to fifth place due to a slow puncture. “Despite the setback in the final, I take a lot of positives with me from Canada. It’s always fantastic to race here. The car ran perfectly and we are definitely working in the right direction. I certainly have a good feeling for the last four races of the season.” For the third EKS driver Reinis Nitišs the weekend was already over after qualifying. Due to a problem with the propshaft, the Latvian finished day one in only 19th place. His race to catch up was rewarded with only 16th place. “A big thank you to my mechanics, who did a fantastic job on Saturday so that I could actually line up on the start. Unfortunately I didn’t have luck on my side. I have to push Canada to the back of my mind quickly and look forwards. In France everything starts from zero again and I’ll prove that I can be better.” The ninth of twelve World Championship rounds is held in Lohéac on September 2–3.