Skip to content
We are using cookies for a better user experience.
09/30/18
Ningbo/Neuburg a. d. Donau
Sports

Links
{{ activeItem() }}
Twitter
05/31/20
That was the season finale of the #DTMesports Classic Challenge on the @Nuerburgring Nordschleife. Thank you for fo… https://t.co/ACSJaQiQOY
05/31/20
Our reigning @DTM champion @ReneRastRacing is live right now. Join him on Twitch: &gt;&gt; https://t.co/ni87YOnzSk… https://t.co/msJFYH57Zv
05/31/20
Here we go for the @DTM eSports Classic Challenge season finale at the @Nuerburgring Nordschleife, from 14:00 CEST.… https://t.co/prgBtMIaU2
05/31/20
Race day for the #DTMesports Classic Challenge finale at the @Nuerburgring Nordschleife. The 1992 season for the fi… https://t.co/j91tAMxu5K
Audi Sport on Twitter
{{ activeItem() }}
Facebook
05/31/20
Season finale: The DTM eSports Classic Challenge is taking place on the Nürburgring Nordschleife today, including the 1992 and 2016 seasons with the Audi V8 quattro DTM and Audi RS 5 DTM. Live from 14:00 CEST. Live stream >> bit.ly/2XgZin5 #PerformanceIsAnAttitude #DTMesports #RaceAtHome #AudiTogether
05/27/20
Daniel Abt, after six years and 63 races, will no longer drive for Audi in Formula E. He has been part of our Formula E team since the debut of the racing series in September 2014, and our official factory driver since the autumn of 2017. In Mexico and at our home round in Berlin, Abt took two fantastic Formula E victories and scored a total of ten podium results. With Daniel, we celebrated great success and made enormous strides with Formula E. We are thankful for our time together and look back on it proudly. However, integrity, transparency and consistent compliance with applicable rules, especially with regards to the past, are top priorities for us at Audi. We stand by our culture of tolerating mistakes. However, the incidents that took place during the “Race at Home Challenge” sim racing series were not a mistake, but a conscious decision to go against the rules. That is what makes the big difference for us. Therefore, unfortunately, we had no other alternative than suspending Daniel Abt. >> audi.com/FormulaE #ABBFormulaE #SimRacing
05/26/20
It’s that time again: the #RaceHome charity racing series. Our DTM drivers are at Brands Hatch this week for more action with the Audi e-tron Vision Gran Turismo. #RaceHome #AudiTogether #etron #StayHome #PerformanceIsAnAttitude #RaceAtHome
05/25/20
Two victories in the virtual racing world of #RaceHome, the first taste of track action and some family time for Nico Mueller. That and more in his latest #DriversDiary. >> audi.com/DTM #RaceHome #AudiTogether #etron #StayHome #PerformanceIsAnAttitude #RaceAtHome
Audi Sport on Facebook 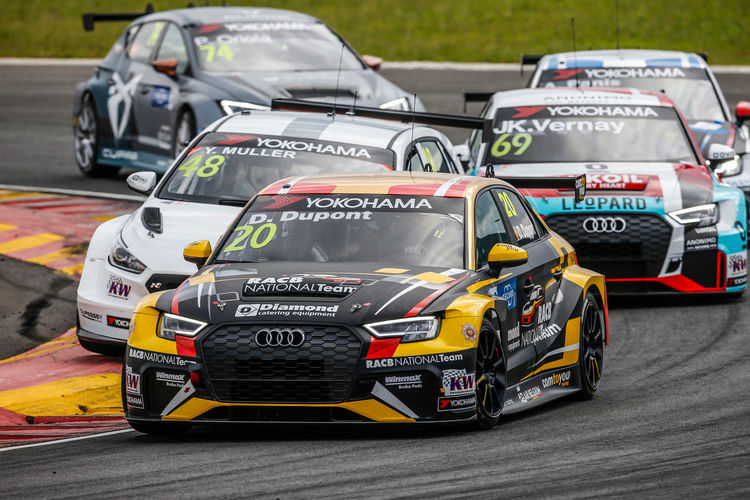 Audi Sport customer racing continues its run of podium finishes at the seventh round of the WTCR – FIA World Touring Car Cup in China. While the Belgian Frédéric Vervisch from Audi Sport Team Comtoyou climbed the podium for the fifth time this year, his countryman and team mate Denis Dupont held a trophy aloft for the first time. In second qualifying, he was sixth and, for the first time, the best of the six Audi RS 3 LMS drivers.

The seventh of ten events was characterized by many bright spells, but also a few long shadows. In the three races, four different Audi drivers – Frédéric Vervisch, Denis Dupont and the two Frenchmen Nathanaël Berthon and Aurélien Panis – scored points in China for the Belgian squad Comtoyou Racing. In contrast, Jean-Karl Vernay and Gordon Shedden from Audi Sport Leopard Lukoil Team scored no points for the first time.

In first qualifying, Vervisch took second place to equal his previous best qualifying performance recorded at the Nürburgring. In race one, the Belgian took third place to scoop his fifth trophy of the year. Denis Dupont finished the turbulent second race as best Audi driver after producing a flawless drive on the way to fourth place. Since his Audi RS 3 LMS remained undamaged, he also had a good chance of success in race three by starting from sixth place. The 25-year old budding talent used his position perfectly, kept himself out of the jostling at the front of the field and crossed the finish line in third place. A race stoppage to repair a damaged curb also failed to knock the Belgian off his stride on his best weekend so far. Frédéric Vervisch drove spiritedly behind to take fourth place. Nathanaël Berthon claimed an eighth place in both the second and third races, Aurélien Panis took ninth in the concluding race.

“Congratulation to Jean-Michel Baert, his Comtoyou team and all the drivers,” said Chris Reinke, Head of Audi Sport customer racing. “They had a good weekend with two podiums and an excellent team performance.” By contrast, the event was a setback for the Audi Sport Leopard Lukoil Team. Jean-Karl Vernay scored no points after qualifying twice outside the top ten, team mate Gordon Shedden also had to settle for finishes outside the top ten. In the final race, the Scotsman produced a good comeback drive to improve from 21st on the grid to finish 13th.

The next FIA WTCR event follows in just one week. The teams travel from Ningbo to the bustling Chinese metropolis Wuhan about 900 kilometers further west, where the drivers compete on the third of four street circuits this season.