Skip to content
We are using cookies for a better user experience.
07/03/19
Neuburg a. d. Donau
Sport 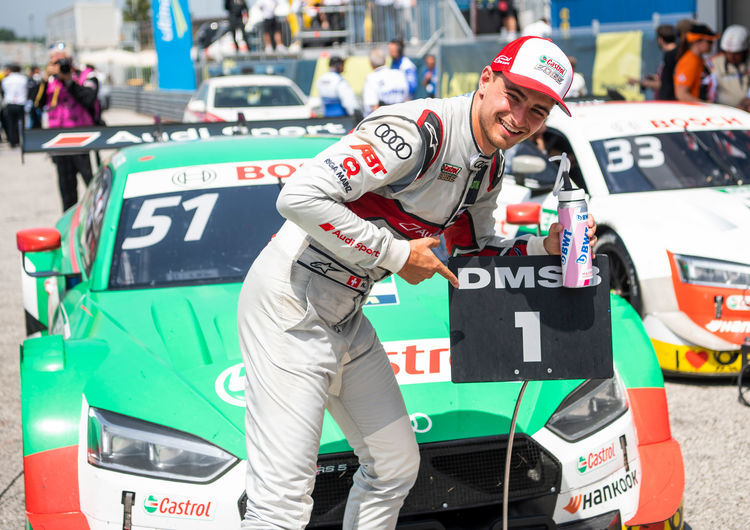 The days following his victory in the DTM race at Misano were action-packed for Nico Müller. The Swiss in an interview before Audi’s home round at the Norisring (Saturday and Sunday live at 1 PM CEST on SAT.1).

How did you celebrate your second DTM victory?
On Sunday night, there was a get-together at the Audi Hospitality. It was nice to drink to the good weekend with the whole team and also with others across the Audi organization. Afterwards, I went bar-hopping for a while with my crew, the mechanics and the engineers on the Adriatic coast. It’s a good place for celebrating such a success. That made us gel even closer and further motivated us to repeat this as soon as possible.

How many WhatsApp messages did you receive after your victory?
I did receive a very large number of congrats. It’s nice to see that people root for you and enjoy sharing such successes. I also received messages from long-standing companions and important people in my career such as our former boss, Dr. Wolfgang Ullrich – needless to say that’s gratifying.

Right after your victory at Misano, you traveled to Neuburg where you gave driving lessons to football star Thomas Müller. Müller multiplied by two in a manner of speaking ...
Meeting Thomas Müller was an absolute highlight. He’s a totally cool guy, still completely down to earth and very relaxed. He also did well at the wheel. After all, it’s not easy to drive a race car like the Audi R8 LMS GT4 at the limit. It didn’t take him long to dare pushing the car and he had a lot of fun in the process. For me, it was an honor to provide him with a few driving skills, to coach him a little and also to give him a small pre-taste of the DTM during a taxi ride in the Audi RS 5 DTM. It was a really great day for both of us.

Are you interested in football? The Audi Cup will be held again soon in Munich.
Admittedly, I’m neither a really big football fan nor a particularly talented footballer. But I do pay attention to what’s happening there from time to time. This sport enjoys such huge interest that you really can’t ignore it. In the country I come from, the Young Boys Bern are on a roll at the moment. They’re really in control of the scene in Switzerland, which makes me very happy. I’ve also had an opportunity to watch FC Bayern München live at the Allianz Arena. The atmosphere there and the passion for this club are absolutely out of this world. In Germany, they’re the team to beat every year. As a sportsman, you can only take your hat off to that.

Back to the DTM. The Norisring is coming up this weekend.
I’m extremely looking forward to the Norisring. It’s a track I have a large number of fond memories of. In 2016, I won my first DTM race there. But in 2018, we were strong there within the Audi squad too. I’ve always felt comfortable at the Norisring. I generally like city circuits and go there with a positive feeling. I’m top-motivated and well-prepared.

The Norisring is only 2.3 kilometers long, so what makes it so difficult anyhow?
In fact, there are only four turns there. The layout looks simple, but we drive there on normally public roads. There are many small hidden challenges. The track is pretty bumpy. The surface changes from year to year and we have to re-learn the track every time. Plus, unlike on normal race tracks, you have to carefully approach the limit step by step, because between the walls and guardrails, any small mistake will cost you dearly, and the gaps are minimal. Racing at the Norisring is about hundredths.

Between the two DTM races at Misano and at the Norisring you went to the E-Prix in Bern. How did you experience the Formula E race in your hometown?
The race day at the E-Prix in Bern was absolutely brilliant. The spectators’ interest was huge. The support I felt even though I wasn’t driving was cool. I think I’ve never had such a long and intensive autograph session before. It’s great to see that the people at home share this passion.

For Formula E, you even sacrificed the 24-hour race at the Nürburgring.
It was extremely strange not being on the grid for the first time in five years. In my opinion, this is the toughest 24-hour race in the world. That Audi Sport keeps winning there is absolutely mega. Congratulations! I hope that I’ll be able to be on the grid myself there again in the future and to battle for victory.

What are your expectations for the Norisring?
Last year, BMW was very strong there and they probably will be again this year. But of course we don’t know yet where we stand at the Norisring compared to Aston Martin. We have to focus on ourselves and do a top job again. In that case, I see no reason why we shouldn’t be in contention for the really big points once again.