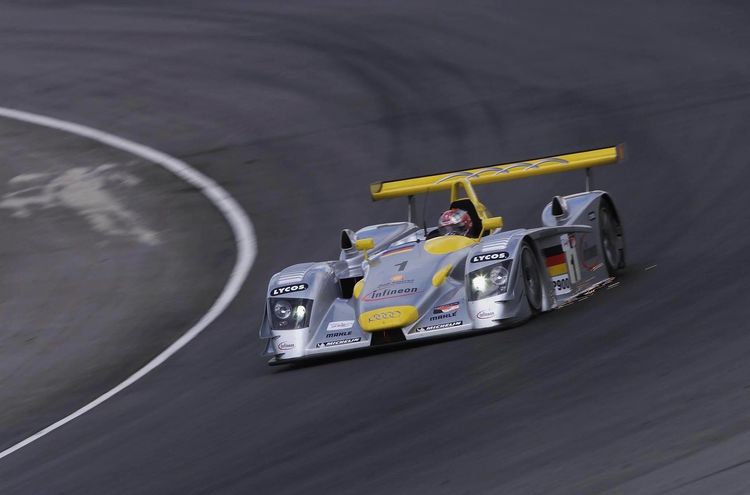 Hardly before the Team Audi Sport North America was so glad setting the best qualifying time for a round of the American Le Mans Series (ALMS): The Infineon Audi R8, which Tom Kristensen qualified on pole position for the race at Mid-Ohio, turned its wheels for the first just 24 hours before. After last Sunday´s crash at Mosport, a new monocoque was transported from Ingolstadt into the USA. Within a single day the Audi mechanics managed to rebuild a new Infineon R8 in a work shop close to the race track at Mid-Ohio.

Rain during Thursday´s test session meant, that the 60-minute free practice on Friday morning had to be enough to setup the Audi for the difficult track. Rinaldo Capello, Tom Kristensen and their crew did the job perfectly: Kristensen qualified the Infineon Audi R8 on pole position almost 0.4s ahead of the fastest Panoz.

Emanuele Pirro held second place in the sister car before he got bumped from the front row by the Panoz in the last seconds of qualifiyng. Johnny Herbert set the fourth fastest time with the 2000-spec R8 of the Audi customer team Champion. After the Mosport crash, the Champion team also had to completely rebuild their R8 in the short time between the two races.

The race at Mid-Ohio as scheduled already for Saturday (start 1 p.m. local time). Tom Kristensen (#1) and Emanuele Pirro (#2) are scheduled as start drivers in the two Infineon Audi R8 sportscars.

Rinaldo Capello (#1): “Tom proved in qualifying that we did good work during the free practice session. He did very fast laps and qualified the car on pole once more. I hope that the race will be dry tomorrow. We have to get back to our high standards to forget what happened at Mosport. The only two mistakes we did so far were in one race - they have to remain the only mistakes for the rest of the season.”

Tom Kristensen (#1): “It is very important to have the pole here, because it is extremely difficult to overtake. But also morally after what happened at Mosport. The boys have been working very hard to rebuild the car with the parts that came from Ingolstadt. This means they had no time to see Niagara Falls on their way to Mid-Ohio. It is nice we could repay this by putting the car on pole.”

Frank Biela (#2): “I already feared that we would lose second place to the Panoz within the last minutes. David Brabham looked really quick especially at the end of the back straight before the sequence of corners. We made a few changes to our car before qualifying, maybe we went in the wrong direction. Now we need to analyse this.”

Johnny Herbert (#38): “We had a good feeling with the car in the wet. So we were happy with what we did yesterday. The changes from this morning were better for qualifying. We are very happy with the balance of the R8 we have for the race. Now we have to be consistent.”

Andy Wallace (#38): “Obviously this is a new track for everybody with these cars. We had a completely new rebuilt R8 after the last race. Everything is fine on the car. We suffered a little bit from understeer, this is causing us to be not as quick as we want. We will work on the setup over night. Even with just a little bit of understeer here you lose a lot of time.”

Reinhold Joest, Team Director Audi Sport North America: “Of course it would have been phenomenal if the Panoz would not have come between our two cars within the last moment. But still we are very happy with the result because neither of our drivers nor the engineers have experience with this racetrack. For sure tomorrow it will become an interesting race especially because Brabham and Magnussen know this course best and the Panoz seems to be handling this track very well.”

Dr Wolfgang Ullrich, Head of Audi Sport: “It"s nice to be in front of the grid once more and nearly we would have had both cars in the front row. Because this racetrack is completely new territory for us I think we found quite a good setup so the starting position looks okay.”