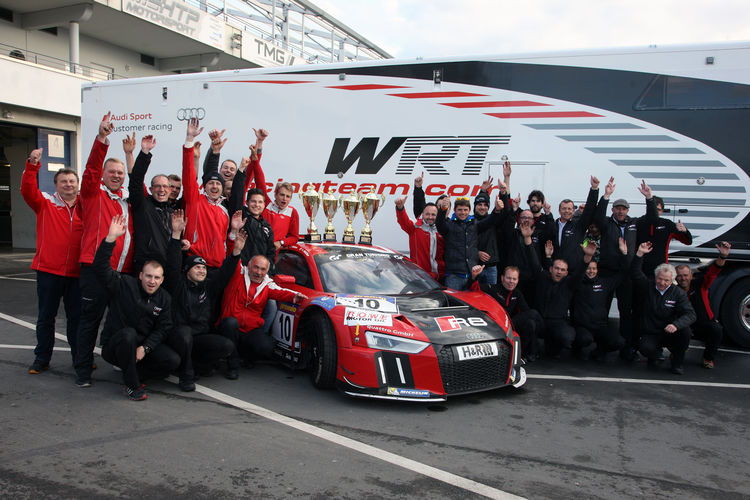 First victory for the second generation Audi R8 LMS: only seven weeks after its world premiere at the Geneva Motor Show, Audi Sport Team WRT clinched a one-two with the new GT3 sportscar in the VLN endurance championship at the Nürburgring.

Christopher Mies and Nico Müller triumphed in the second VLN race ahead of their team mates Pierre Kaffer and Laurens Vanthoor and, in doing so, took a clear victory for the Audi R8 LMS in only its third race – and this on the world’s toughest race track, the Nürburgring-Nordschleife.

In the changeable weather conditions, endurance racing specialist Christopher Mies and Audi DTM driver Nico Müller initially took the lead after ten race laps. The lead exchanged hands several times as they staged a thrilling battle with the best Mercedes-Benz. From lap 18 onwards, the German-Swiss duo gradually increased its lead before finally crossing the finish line after four hours with a 1m 27s advantage over Laurens Vanthoor and Pierre Kaffer. It was the first victory on the Nürburgring-Nordschleife for the Audi Sport Team WRT from Belgium. “We dedicate this victory to J. G. Mal-Voy, the former President of the Audi Club Belgium, who died suddenly last week,” said Team Boss Vincent Vosse.

“I’m absolutely delighted, because it was a nail-biting race. We started on rain tires, changed to slicks and before changing back to wet tires later on,” reported Christopher Mies. “The new Audi R8 LMS was easy to drive in both wet and dry conditions. We have also made progress on the suspension set-up. This was the key to victory today.”

“This victory in the dress rehearsal for the 24 Hours Nürburgring was an important step forwards for us,” said Romolo Liebchen, Head of Audi Sport customer racing. “We had very little experience with the R8 LMS beforehand in these changeable conditions. We saw that our new car is competitive. However, this was a test race. We discovered several things on which we must work to be perfectly prepared for the 24-hour race, because we can expect strong competition.” At the season highlight on May16-17, four new Audi R8 LMS will face up to several dozen GT3 cars in a starter field of almost a 160 participants.

Audi has been testing the new GT3 sportscar, which already complies with the new GT3 regulations, since spring 2014. The races during the 2015 season are specifically to put the Audi R8 LMS through an extensive test program under the toughest conditions. “The goal is to be able to supply a winning racecar to our Audi customer teams by the end of the year, and to convince many teams to choose an Audi,” says Romolo Liebchen.

Like its successful predecessor, many of the parts used on the new Audi R8 LMS are identical to the new production R8, which was launched in Geneva at the same as the racecar and that is launched on the market in Summer.”