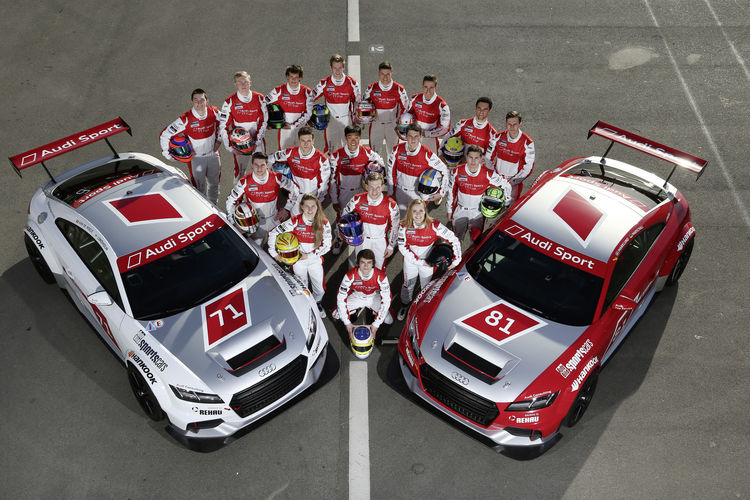 The Audi Sport TT Cup entrants are challenged in diverse ways – not only as race drivers, as they can choose some of the settings on the race cars themselves. Upon the publication of the regulations for the new Audi one-make cup, these options have now been established in detail.

“Our drivers are 21 years old on average. It’s important to us that they learn all the elements of motorsport at an early stage,” says Rolf Michl, the Project Leader of the Audi Sport TT Cup. “And besides driving on the race track, this includes the ideal preparation of the race car before each round.”
Every participant can independently have various components changed by the mechanics’ teams. This includes adjusting the front and rear stabilizer, the traction control system TCS and the differential settings in three defined modifications, for optimal traction of the race car at the front axle. In addition, the drivers can determine the tire inflation pressure within defined boundary values via their defined assistants.
Upon approving the regulations,* the German Motorsport Association (DMSB) has created the boundary conditions for the new Audi one-make cup. Furthermore, the FIA has confirmed the Audi Sport TT Cup as an international racing series. “This has been an important step for us,” says Project Leader Michl. “As a result, the up-and-coming drivers from 13 countries are allowed to be classified with their relevant nation.” In a national series of the DMSB, all drivers would have had to compete under the German flag.
The 18 permanent entrants have already made two choices with significant personal relevance. The car numbers have not been assigned in numerical sequence. Instead, the drivers have been able to freely select them along the lines of major racing series such as Formula One and the DTM. In addition, the drivers could choose the colors of their race cars – a novelty. In addition to catering for personal preferences, this makes it possible for them to accommodate the requirements of their sponsors who are allowed to advertise on the hood. The drivers had the choice between white, black, yellow and blue. Red is reserved for guest entrants.
The field of the 2015 Audi Sport TT Cup with car numbers and car colors**
#3 Rdest, Gosia (PL) – car color: black  #7 Hofbauer, Christoph (D) – blue #8 Thong, Shaun (HK) – blue #9 Önder, Kaan (TR) – yellow  #11 Amweg, Levin (CH) – white #14 Caygill, Josh (GB) – yellow #17 Møller Madsen, Nicolaj (DK) – yellow #26 Peitz, Dominik (D) – blue #27 Marschall, Dennis (D) – black #33 Lindholm, Emil (FIN) – white #40 Coleselli, Marc (A) – white #43 Kisiel, Jan (PL) – yellow #45 Lappalainen, Joonas (FIN) – blue #49 Landy, Sebastian (USA) – blue  #50 Hezemans, Loris (NL) – white #55 van de Poele, Alexis (B) – white #89 Åhlin-Kottulinsky, Mikaela (S) – black #92 Marklund, Anton (S) – black
* Download of the regulations at www.audi-motorsport.com/de/en/tt-cup.html
** Subject to change
– End –
Download PDF (113 KB)
Facebook
Twitter
LinkedIn
WhatsApp
Back to top