Skip to content
We are using cookies for a better user experience.
12/15/19
Sepang/Neuburg a. d. Donau
Sports 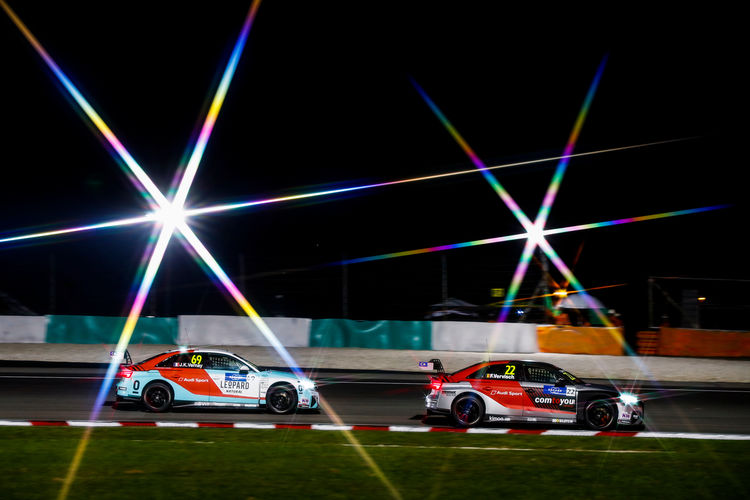 In the WTCR – FIA World Touring Car Cup finale in Malaysia, all four drivers of Audi Sport customer racing experienced a roller coaster ride in the qualifying sessions and the races. Fightbacks in all three races showed what was possible, but unfavorable grid positions and racing misfortune shaped Audi’s weekend. For instance, a defect before the start prevented a possible podium finish by Frédéric Vervisch in the second of three races. In the end, third position claimed by the Belgian in the last race remained as the best result for the Audi RS 3 LMS at Sepang.

“At the close of the season, we’d have wished for a better result, which definitely would have been possible,” says Chris Reinke, Head of Audi Sport customer racing. “However, a whole range of factors caused each of our cars to lose ground during the course of the weekend. Our four drivers, Niels Langeveld, Gordon Shedden, Jean-Karl Vernay and Frédéric Vervisch, showed a strong fighting spirit up until the end – many thanks to them for that.” Frédéric Vervisch was the driver with both the best chances and the greatest misfortune. Having entered the first race from fifth on the grid, the Belgian from Comtoyou Team Audi Sport retired when a slow puncture forced him to pit. He was looking forward to the second race with eager anticipation after having clinched third on the grid as the best qualifying result of all Audi Sport drivers. However, on the way to the grid, he noticed a defective drive shaft which the team was no longer able to replace in time. Consequently, he subsequently started from the pit lane, was handed a drive-through penalty for exceeding the duration of the repair during the starting formation and in the end finished only in position 25. In the third race, Vervisch showed what was possible: from eighth on the grid he attacked on a wet track and finished in fourth, directly in front of Norbert Michelisz, the new World Cup winner. Afterwards, the original third-placed competitor received a sports penalty, so that Vervisch moved up to third place. Niels Langeveld from Comtoyou Team Audi Sport achieved 15th position in the second race as his best result of the weekend.

In Leopard Racing Team Audi Sport, Jean-Karl Vernay and Gordon Shedden were pleased about several successful fightbacks as well. From the 18th spot on the grid, Vernay improved to tenth in the first race, running on slicks on the front and rain tires on the rear wheels on a drying track. His Scottish teammate Shedden did a good job of coping with the same tire choice on the slippery tarmac as well, won seven positions and finished in 15th place. In the second race, Vernay managed the leap from 18th position to 14th in the rain and in the third sprint even from 20th to tenth.

After two years, Audi Sport customer racing’s official program in the FIA WTCR has ended. Audi’s drivers and teams jointly clinched 26 podium finishes, including seven victories, during this period. The Audi RS 3 LMS will continue to be present in motorsport worldwide going forward. Audi Sport has produced 180 of these race touring cars, which are successful in the customer’s hand in North and South America, across Europe, in Asia, Australia and New Zealand, having claimed 78 victories and a total of 227 podium finishes in just this year.