Skip to content
We are using cookies for a better user experience.
11/23/19
Kyalami/Neuburg a. d. Donau
Sports 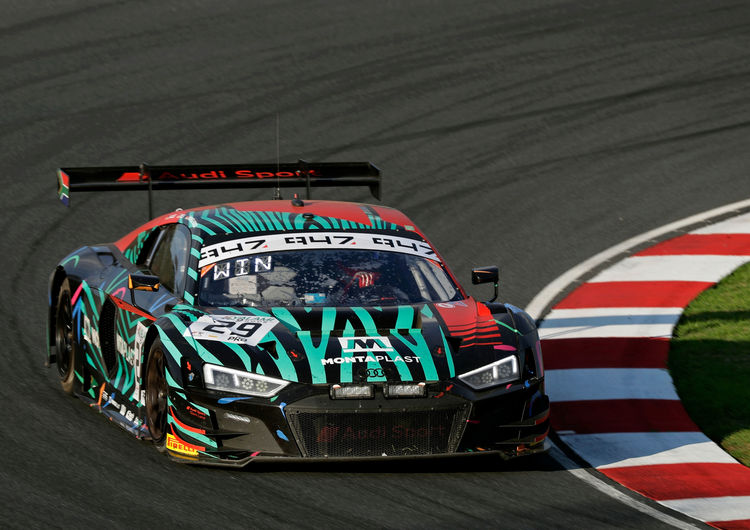 The 9 Hours of Kyalami in South Africa provided a new setting with a highly varied endurance racing competition for the finale of the Intercontinental GT Challenge (IGTC). Audi Sport customer racing missed its chance of clinching a sixth title in this racing series, as several setbacks repeatedly caused both Audi R8 LMS to lose ground and in the end forced them to settle for positions four and eleven. In the manufacturers’ classification, Audi placed third.

“A big thank you goes to the Stéphane Ratel Organisation and the organizers of the 9 Hours of Kyalami. This race is a perfect addition to our calendar,” says Chris Reinke, Head of Audi Sport customer racing. “We very much enjoyed competing in South Africa and are already looking forward to the next races in this country. Today, we would have preferred battling for the title up until the end for our fans and for race victory like most recently at Suzuka. But, unfortunately, we made too many mistakes.” In a turbulent race, Audi Sport with its two teams repeatedly managed to be in contention for the top spot in a field of 28 race cars. The Audi R8 LMS was at the very front already in qualifying. Christopher Haase, who took turns at the wheel with his fellow German Audi Sport drivers Christopher Mies and Markus Winkelhock, had qualified the number 29 Audi R8 LMS from Audi Sport Team Land for the front row of the grid with the second-best time.

In the race, the two GT3 sports cars soon found a good rhythm on a dry track. Dries Vanthoor shared the cockpit of the number 25 Audi R8 LMS Nummer from Audi Sport Team WRT with his Audi Sport teammates Kelvin van der Linde and Frédéric Vervisch, and on lap 139 took the lead for the first time. Six laps later, the time sheets showed Markus Winkelhock in the top spot. On lap 193, the race car sporting the green Montaplast zebra livery was leading the race again, this time with Christopher Mies at the wheel. But neither of the two sports cars mastered the distance without any mistakes. The race car of the three Germans had to serve two drive-through penalties due to a refueling mistake and violation of the pit stop duration while car number 25 was also handed a drive-through penalty for its pit stop duration, plus suffering a puncture. In the final stage, heavy rain caused a near-two-hour neutralization. In the end, Haase/Mies/Winkelhock achieved fourth place on the challenging circuit between Johannesburg and Pretoria, while van der Linde/Vanthoor/Vervisch crossed the finish line in eleventh. Frédéric Vervisch thus placed fifth in the drivers’ classification of the racing series. In its maiden season, the evolution version of the Audi R8 LMS in customers’ hands clinched a total of 13 drivers’ titles worldwide, won 16 other championship classifications, plus two 24-hour races.