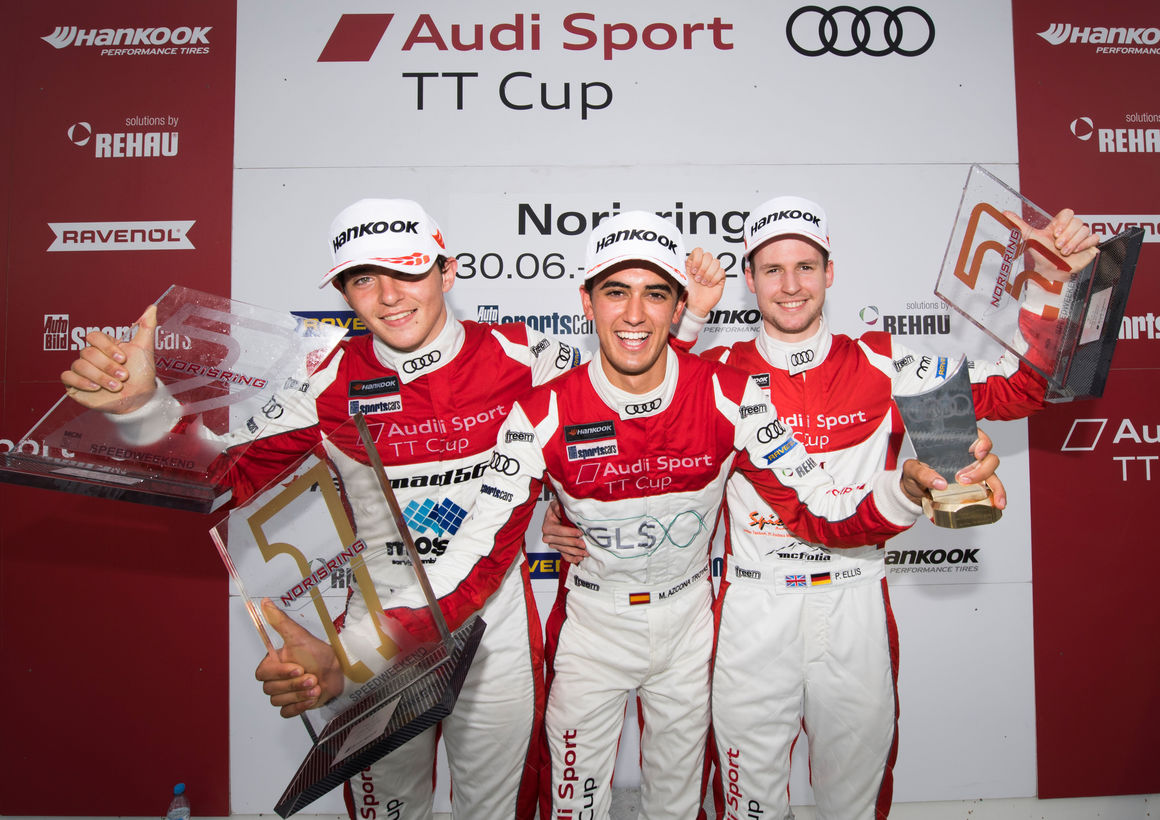 The third round of the Audi Sport TT Cup has shaken up the competition. Mikel Azcona from Spain ended Philip Ellis’ winning streak and in doing so improved from seventh to second on the table.

The fight at the top of the table is heating up: with two dominant victories from pole, Mikel Azcona has caught up with the leader. The 21-year-old Spaniard now occupies second on the leaderboard, 33 points off the top. Table leader Philip Ellis, the winner of the first three races, had to settle for second and third place at the Norisring. However, the Briton remains the most consistent driver of the season with five podium results in a row. Just one point behind Azcona is Milan Dontje in third. The Dutchman finished third on Saturday and fifth on Sunday at the only city race on the calendar.

There was a new face on the podium with the second-placed Tommaso Mosca. The Italian has thus climbed to fourth on the table and now took over the lead in the rookie standings from Swiss driver Yannik Brandt.

Several other drivers provided surprises in Nuremberg as well. Fabian Vettel delivered his best qualifying performance of the season so far with fourth on the grid on Sunday. The 18-year-old from Heppenheim was on course for a podium until the 23rd of 26 laps, when he touched the wall and fell back down the field. Keagan Masters from South Africa took his best Audi Sport TT Cup result so far with fourth place on Sunday. For the first time, the youngest driver finished the race as the best woman: the 17-year-old Hungarian Vivien Keszthelyi finished eighth place on Sunday, after Gosia Rdest from Poland, who had previously been second on the table, was involved in an accident and had to retire early on.

Ski-ace Linus Straßer also celebrated a result in the top ten. The 24-year-old from World Cup race winner from Munich drove to ninth place in his second ever motor race on the 2.3-kilometer city circuit in his home-state of Bavaria. “The city race has brought a breath of fresh air,” says Chris Reinke, Head of Audi Sport customer racing. “In Mikel Azcona, we have seen a new, well-deserved winner, whilst several other competitors have delivered their best performances in qualifying or in the races. Congratulations as well to our guest starter Linus Straßer on his ninth-place finish.”

The next races on the agenda will be held in Zandvoort in seven weeks’ time, on August 19 and 20. The circuit on the Dutch coast of the North Sea demands a lot from the drivers, with fast sections, diverse corner radii and often changeable levels of grip.