Mattias Ekström: With teamwork to the DTM title 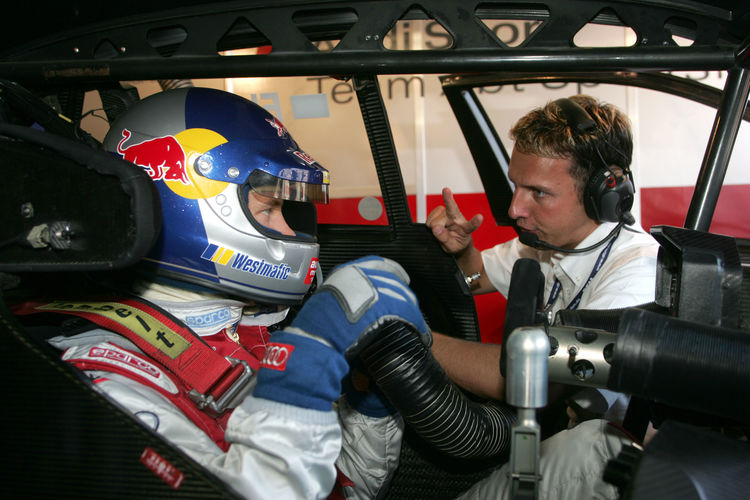 The new DTM king is crowned: Mattias Ekström (26) secured the championship title of Europe’s most popular touring car race series early at last weekend’s penultimate round with the Audi A4 DTM, thereby making the successful comeback of the squad from Ingolstadt perfect. “It is a tremendous success for Audi to have won the title in the first year,” explains Audi Motorsport Head Dr Wolfgang Ullrich. “Mattias worked hard for the title. But he obviously also has a team backing him a hundred percent.”

This is made up of almost 150 employees from Audi Sport and the two works teams Audi Sport Team Abt Sportsline and Audi Sport Infineon Team Joest. Audi Sport is largely responsible for the concept and development of the Audi A4 DTM under the direction of Wolfgang Appel (Vehicle Technology) and Ulrich Baretzky (Engine Technology), the two teams handle the race logistics for the six cars.

“Audi Sport has once again done a great job, the A4 DTM is a fantastic car,” enthuses Mattias Ekström. A complement that Stefan Aicher (35) should particularly enjoy hearing, as the A4 DTM is more or less his “baby”. When the plans for the works DTM comeback gelled at Audi, Aicher, who has been active in the suspension field at Audi Sport since 1999, was entrusted with the job of technical project leader. “To be in charge of a complete project from A to Z and not to be responsible for just a particular area was an enormous challenge for me,” says the family man, who studied mechanical engineering before coming to Audi Sport. “It obviously makes me very proud that we won the championship first time out.”

The first phase of the A4 project ended with the delivery of the cars to the race teams for the man from Berchtesgaden. “During the season I mainly make sure that the cars run and the performance is at the correct level.” Aicher feeds his computer with data from the race cars, analyses video footage and records all the tiny details that are subsequently evaluated in Ingolstadt.

Aicher is extremely impressed by the new DTM Champion: “‘Eki’ is a really pleasant bloke and exceedingly intelligent. He doesn’t only drive quickly, but is also one of the few who approaches you when he has an idea. I have hardly ever met a driver who shows so much initiative. It helps us in the development, and the way he gets on so well with his race engineer is hilarious.”

Alexander Stehlig (29) has been Mattias Ekström’s race engineer since the middle of 2001 and is therefore the person who, together with the Swede, develops the set-up of his A4 DTM. Ekström says how the car handles on the circuit, and Stehlig proposes the next change based on the drivers comments. “The good thing is that Mattias and I have collected all of our DTM experience together,” recounts the Franconian, who, after having studied vehicle engineering, responded to a job advertisement placed in the Internet by Abt Sportsline in 2000 and landed immediately in the DTM team – completely without any knowledge of motorsport. In the meantime they trust each other implicitly. “A big advantage is that we have been working together for so long,” believes Stehlig, who describes his relationship with Ekström as “friendly” and knows exactly what makes “his” driver so strong: “The huge amount of experience in the DTM, his coolness and composure combined with speed, and the incredibly distinct ability to feel what the car is doing.”

The relationship between Mattias Ekström and his chief mechanic Janne Ljundberg (31), one of four Swedes who work on the new champion’s car and apply the changes that Ekström and Stehlig have worked out, is similarly close. “When Mattias comes into the pits, I can already see by his head movement whether we have progressed in the right direction or not,” says Ljundberg. “I’ve known Mattias since 1999; we have also done a lot together privately over the last few years in Sweden. Because of the amount of work there hasn’t really been a lot of time for such things this season.” He never ceases to be amazed how well Ekström is acquainted with the technology: “He knows the car a hundred percent, every detail. Mattias knows exactly how long jobs take, what you can and can’t change within a certain time on the car.”

Ljundberg is the last to leave Ekström’s car before the start of the race. “The ritual is always the same: I connect the starter battery, Mattias fires up the engine, I pull out the jump plug and then we briefly shake hands again,” says the Swede who lives in Bavaria, and is one of the most important men in the team for Ekström: “If Janne says that the car is okay, then I know that that is the case.”

Volker Nossek (42), the DTM project leader at Audi and, as team coordinator, the interface between Audi Sport and Audi Sport Team Abt Sportsline, ensures that Ekström feels comfortable in his work. “I listen to the drivers’ wishes and attempt to make the right connections,” says the father of two children, who already worked for Audi as a sub-contractor during the 1980s in rally sport. The engineer from Leverkusen has been permanently employed by Audi Sport since 1996. Mattias Ekström was an introverted young man when Nossek first met him. “He has developed well and is much more open today,” explains the mechanical engineer. “Little by little I found out what the driver ‘Eki’ needs to keep him satisfied.”

For Nossek, who also assisted Team Abt Sportsline on the way to their first DTM title in 2002, the 2004 season was very special: “Audi Sport has broken new ground in the DTM. At the beginning we didn’t know exactly how we compared to our competitors. But we learnt very quickly how to cope with the DTM and developed ourselves logically. The result is the championship title.”