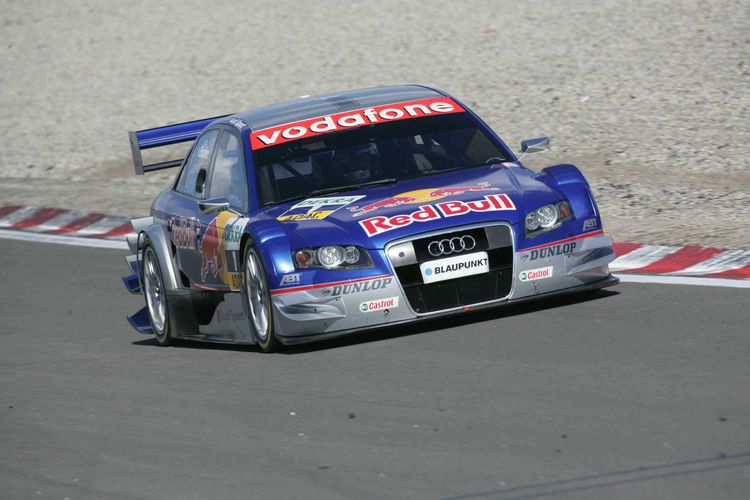 Title defender Mattias Ekström will start to the DTM race at Zandvoort (the Netherlands) this Sunday from third row as the best Audi driver. The Swede from Audi Sport Team Abt Sportsline took seventh place in the turbulent qualifying. In the subsequent single timed lap (“Super pole“) the Swede improved to fifth place on the grid, although he was one of the first drivers to go out on the track which kept getting faster as the session went on.

Altogether, five Audi drivers managed to make it into the top ten, delivering a strong team performance that was not rewarded, though, in the Super pole. After Audi had been at the top of the field in all free practice sessions, Tom Kristensen, clocking 1m 32.968s in the qualifying session, drove the fastest lap ever to have been achieved by a DTM car at Zandvoort. In the Super pole, as well, the Le Mans record winner was heading for the best time, running as the quickest driver by far in the first sector, but then had to settle for tenth place on the grid after making mistakes in the second sector.

Allan McNish claiming seventh place on the grid equalled his best DTM qualifying result so far. Christian Abt and – for the first time – Frank Stippler, as well, were two drivers from Audi Sport Team Joest qualifying for the Super pole with their cars from last year, thus having a good starting position for the race on Sunday which is scheduled to start at 2 p.m. (local time). ARD will start to broadcast live from Zandvoort at 1.45 p.m. (local time). Martin Tomczyk, Rinaldo Capello and Pierre Kaffer will start from positions 15, 16 and 18 respectively.

Mattias Ekström (Audi Sport Team Abt Sportsline #1)
5th place Super pole, 1m 33.277s
“Of course I would have preferred seeing Tom (Kristensen) and myself starting from the very front. But it didn’t work out that way – and that’s why tomorrow will be a tough day for me. It’s difficult to win a race starting from fifth place, especially here at Zandvoort. But it has happened before, at Brno. We’re going to fight hard to make it happen again.“

Allan McNish (Audi Sport Team Abt #6)
7th place Super pole, 1m 33.404s
“I really like this circuit and, what’s more, we improved the car some more overnight. That’s why I was able for the first time to use my Audi A4 DTM’s full potential in the qualifying. My Super pole was good but I had the feeling that, later, the track kept getting better. That was a shame because it meant all the pressure was on Tom’s (Kristensen) shoulders, which, unfortunately, didn’t work out. Well whatever: tomorrow, we’re going to give everything.”

Christian Abt (Audi Sport Team Joest Racing #14)
8th place Super pole, 1m 33.636s
“I was satisfied with the qualifying. Too bad that the yellow flags weren’t used properly, otherwise my turn to go out for the Super pole would have come later – and that’s when the track was apparently faster. Eighth, though, is a position from which you can certainly grab points. What’s more, my main rivals – Häkkinen and Alesi – are behind me and that’s why I want to use the opportunity to stabilise my position in the DTM standings.“

Frank Stippler (Audi Sport Team Joest #19)
9th place Super pole, 1m 34.132s
“I was the track sweeper because when I went out for the Super pole as the first driver I slipped in places where I hadn’t on new tyres in the practice sessions. Considering these conditions, my lap was good. Generally speaking, I’m satisfied with ninth place, because that was another nice improvement.“

Tom Kristensen (Audi Sport Team Abt #5)
10th place Super pole, 1m 34.244s
“I’m terribly disappointed. It goes without saying that after achieving best times in almost all the practice sessions I wanted to do better than merely tenth place. In the first sector I was still heading for a best time, but in turn six the car got out of control – that made me lose too much time. I’d simply been wanting to claim pole for Audi at all cost.”

Martin Tomczyk (Audi Sport Team Abt Sportsline #2)
15th place, 1m 33.874s
“I was too slow. I’m really beginning to wonder: after all, in the past few years I used to make it into practically every Super pole. Something’s just not right that should be. Unfortunately, I don’t know what it is. But there’s no such thing as giving up, because tomorrow is another day.”

Rinaldo Capello (Audi Sport Team Joest #18)
16th place, 1m 34.145s
“In the free practice session I wasn’t satisfied with the car. In the qualifying it was better but in the S-turn I kept losing lots of time with my tyres spinning. With the exception of this, my laps were pretty good, and the rest of it we’ll have to work on by tomorrow.”

Pierre Kaffer (Audi Sport Team Joest Racing #15)
18th place, 1m 34.180s
“This morning things were going pretty well, that’s why I went into the qualifying with optimism. I don’t know what kind of problem we’re having now. My goal had been to be further towards the front than 18th place on the grid. Yet I’m not going to give up because I know we’ve got a good set-up for the race. In other words: tomorrow, I’m going to give everything to make the best of the situation.”

Hans-Jürgen Abt (Team Director Audi Sport Team Abt Sportsline): “Today we were able to see yet again that the Super pole has its own rules. I’m a bit disappointed, but Tom (Kristensen) risked a lot and made a mistake doing it. But these things happen, let’s face it, a similar thing happened to Gary (Paffett) as well. Now, we’ll have to fight tomorrow. And we’ve often proved that we’re capable of that.”

Ralf Jüttner (Technical Director Audi Sport Team Joest): “We had two cars in the Super pole. That’s good. Too bad that our other two drivers didn’t make it into the top ten. But there was a lot of trouble with the yellow phase which wasn’t shown on the monitors although the marshals were waving flags. We’re in a good position for tomorrow. I just hope we’ll get rid of that curse that seems to keep us from scoring points whenever we’re in the Super pole.”

Dr Wolfgang Ullrich (Head of Audi Motorsport): “It’s good that we had five cars in the top ten. Nevertheless, we ended up with our worst qualifying result this year. That’s disappointing. Tom (Kristensen) was on a really fast lap but, unfortunately, wasn’t able to finish it all that well. Now we’ll have to make the best of this situation tomorrow.”