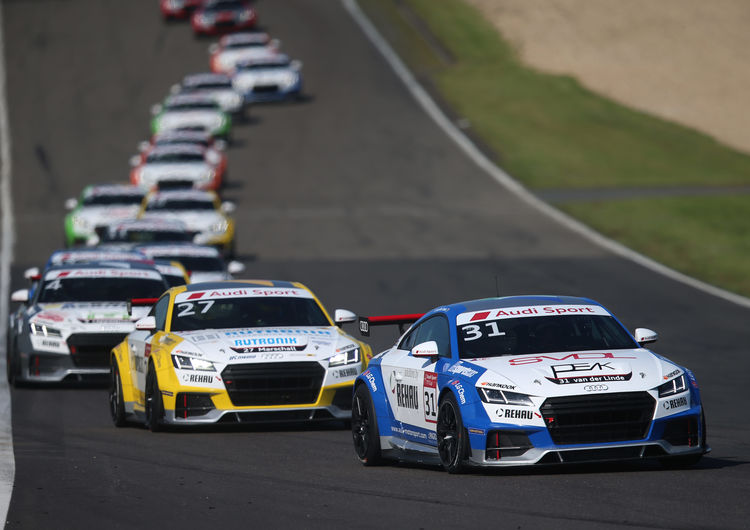 The Audi Sport TT Cup was impressive in every respect on making its debut as part of the 24-hour race at the Nürburgring. In the Audi one-make cup, spectators witnessed nail-biting duels and numerous overtaking maneuvers in both rounds.

At the Nürburgring, the international talents in the Audi Sport TT Cup seamlessly continued their strong performances delivered in the Hockenheim season opener. Dennis Marschall (D) dominated the action in round one and celebrated an uncontested lights-to-flag victory. The second race on the Grand Prix circuit of the tradition-steeped track in the Eifel was marked by Sheldon van der Linde (ZA). The merely 17-year-old rookie in the Audi one-make cup has now won an amazing three in four races of the season. “Prior to the event, I emphasized that the round held as part of the 24-hour race is going to be an absolute highlight. This has proved true one hundred percent,” says Philipp Mondelaers, Project Leader Audi Sport TT Cup.

Following the rookies’ strong debut at Hockenheim, in which the newcomers took three in six possible podium places, the seasoned campaigners struck back at the Nürburgring. In race one on Friday, three drivers, Marschall, Joonas Lappalainen (FIN) and Christoph Hofbauer (D), who had been on the grid in the Audi Sport TT Cup last year, mounted the podium. On Saturday, van der Linde’s time came again. The double winner from the Hockenheim season opener started from pole position and, following a fierce but always fair duel with Marschall, went on to cross the finish line in first place. Lappalainen completed the podium in position three.