{{ activeItem() }}
Twitter
08/14/20
We have arrived at the @Lausitzring_de for two consecutive race weekends. Here is all you need to know before we hi… https://t.co/Sk38fR4It3
08/14/20
Good morning from the @Lausitzring_de. We’re going to start this @DTM race weekend with both practice sessions this… https://t.co/ah2HIvVbFF
08/13/20
Thank you for supporting us in this @FIAFormulaE season. As things wind down here in Berlin, we’re on to the next:… https://t.co/2IsWJxbvQU
08/13/20
“We can be proud of the way that we fought back at the end in this ‘Berlin Six’.” – @allanmcnish after the final ra… https://t.co/IUx6D6J3Md
Audi Sport on Twitter
{{ activeItem() }}
Facebook
08/11/20
Victories for the Audi R8 LMS in the GT World Challenge Europe at the Misano World Circuit highlighted a weekend with wins and podiums around the world. Well done to our customers. 🇮🇹 🇩🇪 🇨🇳 🇷🇺 🇧🇪 🇿🇦 🇸🇪 🇺🇸 >> audi.com/GT3 >> audi.com/GT4 >> audi.com/TCR #PerformanceIsAnAttitude
08/10/20
Before heading to Lausitzring this weekend, let’s have a quick look back on the DTM safety measurements at the track in Nico Mueller’s latest #DriversDiary. >> audi.com/DTM #PerformanceIsAnAttitude #ThanksToDTM
08/10/20
We will be back racing at the Lausitzring for the next two weekends. Let’s have a look back on our history at the circuit. >> audi.com/DTM #PerformanceIsAnAttitude #ThanksToDTM
08/03/20
What a start to the DTM season it was for Nico Mueller! Race victory and he is currently leading the drivers’ standings. See how he experienced the weekend in his latest #DriversDiary. >> audi.com/DTM #PerformanceIsAnAttitude #ThanksToDTM
Audi Sport on Facebook 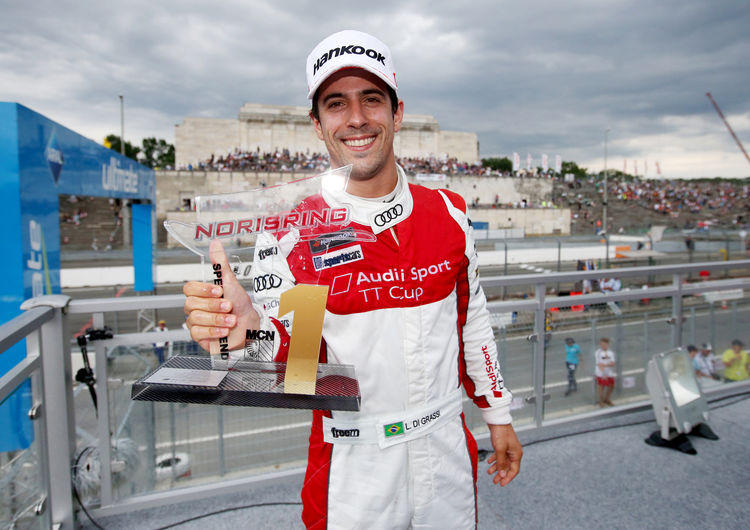 The Audi Sport TT Cup celebrated a successful home round at the Norisring. The German Dennis Marschall and Joonas Lappalainen from Finland triumphed in the classification rounds. Audi factory driver Lucas di Grassi was the first to cross the finish line in race two on Sunday and secured first place among the guest drivers in both rounds.

On the challenging city street circuit in the Franconian metropolis, the young talents delivered top-class motorsport as part of the DTM’s supporting program. In race two on Sunday, four drivers battled for victory up to the finish line. In the end, Lucas di Grassi won with his wealth of experience. As the Brazilian was classified in the guest entrants’ group, Joonas Lappalainen, in second place, celebrated victory in the race – not a new experience for the Finn. In his triumphs in the 2015 Audi Sport TT Cup at the Hockenheimring, the 18-year-old saw the checkered flag behind guest entrants René Rast and Marco Bonanomi in both rounds and, as a result, secured the respective victories as well.

In round one on Saturday, Dennis Marschall had kept the upper hand. The young German who had started from pole position kept a cool head at all times in temperatures of about 30 degrees centigrade and clinched success in commanding style. “That was a fantastic weekend,” says Project Leader Philipp Mondelaers. “We not only saw superb motorsport in the Audi Sport TT Cup once more but, in Lucas di Grassi and Bundesliga coach Michael Henke, had two outstanding celebrities in our field as well.”

Chris Reinke, Head of Audi Sport customer racing, assessed the event positively too: “Following Audi Sport’s two fantastic successes in the DTM, the performances delivered by the young drivers in the Audi Sport TT Cup marked a tremendous conclusion of a very successful weekend.” After three of seven race weekends, Dennis Marschall has taken the lead of the overall Audi Sport TT Cup standings. The driver who finished last season in third place, with a score of 124 points, has a five-point advantage over Lappalainen. The previous front runner, Sheldon van der Linde, following his retirement in round two at the Norisring, dropped to third place with 106 points. In round four, the Audi Sport TT Cup will be celebrating a premiere. From July 15 to 17, a race weekend in the Audi one-make cup will be held at Circuit Park Zandvoort in the Netherlands for the first time.

Meanwhile, the talent search for the coming season is already in full swing. The application form for participation in the 2017 Audi Sport TT Cup is available online: www.audi-motorsport.com/de/en/tt-cup.html.