Loïc Duval: “I’d like to mount the podium in the DTM” 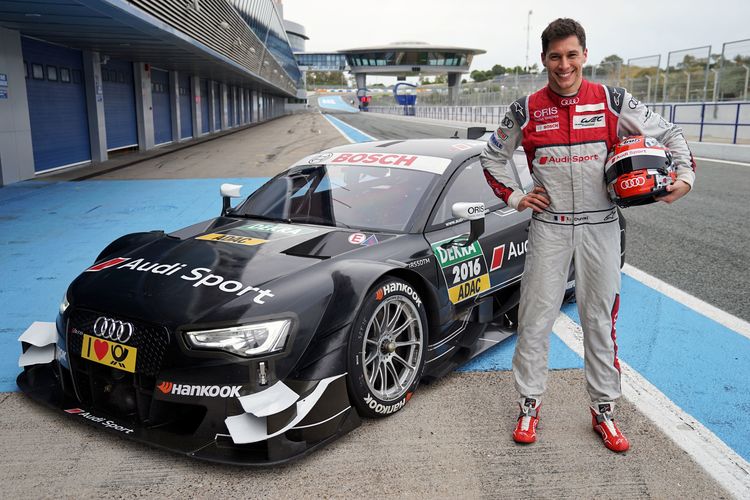 A new challenge for Loïc Duval: Following five years with Audi in the FIA World Endurance Championship (WEC), a title win and a Le Mans victory, the 34-year-old Frenchman is switching to the DTM in 2017. In an interview, Duval talks about his initial impressions in the Audi RS 5 DTM and the feeling of being a rookie again.

Switching from the WEC to the DTM is a major step – are you looking forward to this new challenge?
Loïc Duval: “I’ve always been a great fan of the DTM. Even back when I was racing in the Formula 3 Euro Series I was really excited about watching the DTM races. The DTM features strong drivers, tremendous cars and gripping races. When Dieter Gass called and asked me if I’d like to race in the DTM I immediately said yes.”

What was your impression of the Audi RS 5 DTM during the first DTM test at Jerez?
“I previously drove similar cars in Japan, so I immediately felt comfortable. The RS 5 DTM has a lot of power and good aerodynamics. The tires are an unknown factor. I was running on 2016-spec tires and can’t judge how big the difference between them and the 2017-spec tires will be. In total, I had two important test days, one on a dry and one on a wet track. As a result, I was able to get to know the car in varying conditions.”

How were you received by Audi Sport’s DTM squad?
“My new teammates gave me a positive welcome. I’ve known the Audi DTM drivers for many years. Although I was racing in the WEC we met at the fitness camp and on many other occasions. Everyone was very nice and answered many questions I had. Obviously, the guys I feel closest to are René Rast and Mike Rockenfeller because we spent a lot of time together as teammates in the WEC and at the 24 Hours of Le Mans.”

What are the most awe-inspiring aspects for you in the DTM?
“There are many drivers in the DTM with huge experience. Qualifying is often very close, with two tenths of a second making the difference between being at the front or at the far rear of the grid. You have to get everything together in a very tight space of time in the DTM. I still find it hard to judge how long it’s going to take me to know my way around there. The relationship with the race engineer is very important too. In the beginning, it’s probably going to take some time as well to establish the right rapport between us.”

In terms of technology, the DTM cars are going to change to some extent compared with 2016. Is switching to the DTM exactly at this moment a slight advantage?
“In spite of my experience in motorsport I’m nearly a rookie again. So that, no doubt, makes it a little easier to switch to the DTM exactly at this point in time because in 2017 there’ll be changes to aerodynamics, engine output and tires. Plus, pre-heating of the tires will no longer be allowed. As these things mean that even seasoned campaigners have to readjust, it may be easier for me to get on the same level.”

Are you already familiar with all the DTM race tracks?
“I know many of the DTM tracks from my days in the Formula 3 Euro Series. Moscow, Budapest and the Red Bull Ring are new for me. But today it’s relatively easy to get to know them on the simulator. Still, you can only find the last hundredths on the track.”

What does your preparation for the season look like?
“The winter break is very long, so I exercise a lot. I’m also going to spend a few days with the team and go to Neuburg to meet more people from the DTM environment. Between February and April, further tests are planned that I’m looking forward to very much.”

Some of the DTM races conflict with Formula E. What is your priority?
“Definitely Audi – as in the past. When there are overlaps with Formula E, I’m obviously going to race with Audi in the DTM, no doubt about it.”

What’s your aim for the 2017 season?
“I’d like to have a lot of fun because that’s when the results are good too. The faster I adjust to the DTM, the earlier good results can be expected. I’d like to mount the podium in the DTM this season.”

Which Audi are you privately driving at the moment?
“I’m currently driving an Audi RS 6 but am waiting for the Audi SQ7. That’s a great car with a powerful TDI engine, plus plenty of space for my two kids and lots of luggage.”