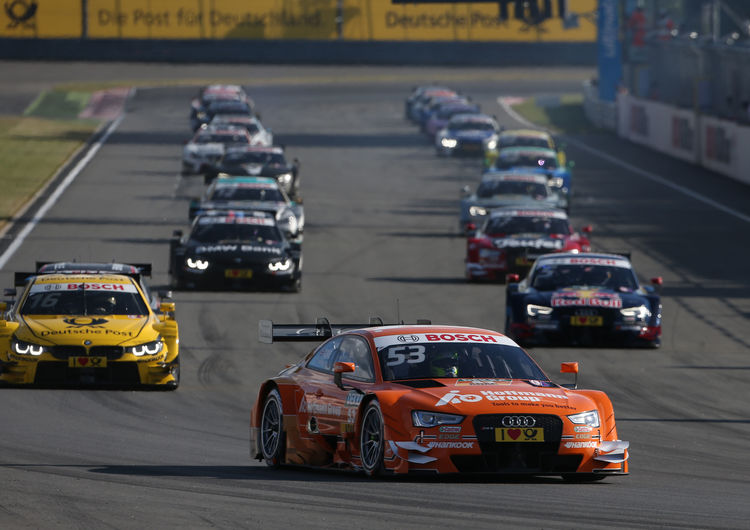 The 2015 DTM remains turbulent. In spite of a strong vehicle performance Audi had to settle for fourth place in the first of the two races of the DTM’s round in Russia.

The race was bitter particularly for Mattias Ekström, who in the heaviest car in the field had shown an impressive performance. From grid position six, he immediately advanced to fifth place in the Red Bull Audi RS 5 DTM. However, his attempt to overtake the BMW of Timo Glock, who was running in fourth place, on lap eleven ended in a spectacular collision between the two and in retirement of the previous leader of the standings.

“Timo was starting to have problems and getting slower,” said Ekström. “I was already running side by side with him and didn’t expect him not to leave me any room. But apparently the going is now getting tougher in this stage of the championship.” Due to his retirement Ekström dropped to second place in the championship and before the second Moscow race on Sunday (start at 16.13, local time, from 15.00, CEST, live on ‘Das Erste’) is trailing Saturday’s winner Pascal Wehrlein (Mercedes-Benz) by eight points.

The best Audi driver on Saturday was Jamie Green in the Hoffmann Group Audi RS 5 DTM of Audi Sport Team Rosberg. After five races without points, the Briton finished in fourth place. Up to the last lap, he was fighting a duel for second place with title defender Marco Wittmann in his BMW. But in the last turn, he lost third place to Bruno Spengler.

A strong performance was shown by Edoardo Mortara as well. Following a difficult qualifying session, the Italian in the Castrol EDGE Audi RS 5 DTM of Audi Sport Team Abt Sportsline advanced from position twelve on the grid to sixth place and, as a result, scored important points in the battle for the title. In the overall standings, he is trailing Wehrlein by 13 points in position three.

Adrien Tambay already damaged his Playboy Audi RS 5 DTM in the starting stage and retired eight laps before the end of the race. Miguel Molina’s race in the Teufel Audi RS 5 DTM even ended as early as in turn one. The Spaniard spun because he wanted to avoid a collision and was subsequently hit hard by Christian Vietoris.

“Now, we have to prepare two heavily damaged cars overnight from scratch again,” said Dieter Gass, Head of DTM at Audi Sport. “The main thing is that both drivers are okay. The safety concept of the DTM proved its viability once more. Obviously, today’s results were disappointing for us on the whole because our cars were very fast in spite of the high performance weights. On the other hand, this gives rise to hope for race two tomorrow. We’ve seen how quickly the tide can turn in the DTM on several occasions this year.”