Lead of the standings, but disappointment for Audi 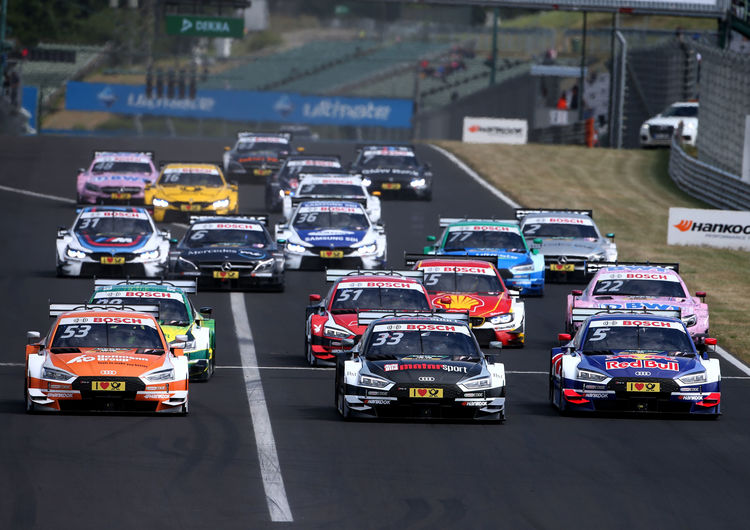 Audi has taken the lead in the DTM manufacturers’ and teams’ standings at Budapest (Hungary). Following a strong performance in qualifying that put five Audi RS 5 DTM cars at the front of the grid, the race, however, ended in extreme disappointment for Audi.

After 34 laps on the Hungaroring, Mike Rockenfeller from Audi Sport Team Phoenix in position four was the best Audi campaigner, although Audi had achieved the best times in both free practice sessions and clearly dominated Saturday morning’s qualifying.

Following the start, four Audi RS 5 DTM cars, with René Rast, Mattias Ekström, Jamie Green and Mike Rockenfeller, were initially the dominant front runners before, on lap eight, the safety car was deployed due to Maxime Martin having “parked” his BMW on track. His two brand colleagues, Timo Glock and Bruno Spengler, as well as Mercedes driver Paul Di Resta, who had already made their mandatory pit stops at that time, benefited from the caution period. All other drivers had to pit for the tire change after the race was restarted and dropped far behind the new leading trio.

Although the Audi drivers were up to two seconds faster some of the time, Mike Rockenfeller ultimately finished “only” in position four. The 2013 DTM Champion made up more than 20 seconds to the subsequent winner. Shortly before the end of the race, Rockenfeller closed the gap to Bruno Spengler, who was running in position three, but was no longer able to overtake the Canadian.

“If the race had been one lap longer, I’d have still caught him,” “Rocky” said after the race. “The result is obviously disappointing for Audi. Personally, I extracted the maximum. My car was fast and the race was a lot of fun. The rules are the way they are: if you risk pitting early you know that you’ve bagged a possible safety car. Today, we didn’t do that and were punished for it – while others were rewarded. But that’s racing. I scored important points and moved up to position three in the standings.”

Mattias Ekström finished the race in fifth place. René Rast and Jamie Green, due to late stops, dropped to positions six and seven. Still, Green managed to reduce his deficit to the leader of the standings, Lucas Auer (Mercedes-Benz), to eight points.

Nico Müller, in position eleven, just barely missed scoring a point after the rear of his car was hit hard after the restart, which heavily damaged his Audi RS 5 DTM. Loïc Duval, on taking grid position seven, achieved the best qualifying result in his budding DTM career. The Frenchman missed scoring his first DTM points due to a collision on the last lap that caused him to drop from ninth to 15th place.

“After our strong qualifying, today’s result is extremely disappointing and frustrating,” said Head of Audi Motorsport Dieter Gass. “Our starting base was perfect, but the safety car came at a most unfavorable moment. We were just in the process of calling Loïc Duval into the pits in order to keep at least one car in the group of those having stopped early. You never know if and when there’ll be a safety car. We had the strongest car by far today and are going to leave no stone unturned to be in contention for victory again tomorrow.” Race two at the Hungaroring will start at 15:15 on Sunday.