Skip to content
We are using cookies for a better user experience.
06/24/18
Vila Real/Neuburg a. d. Donau
Sports 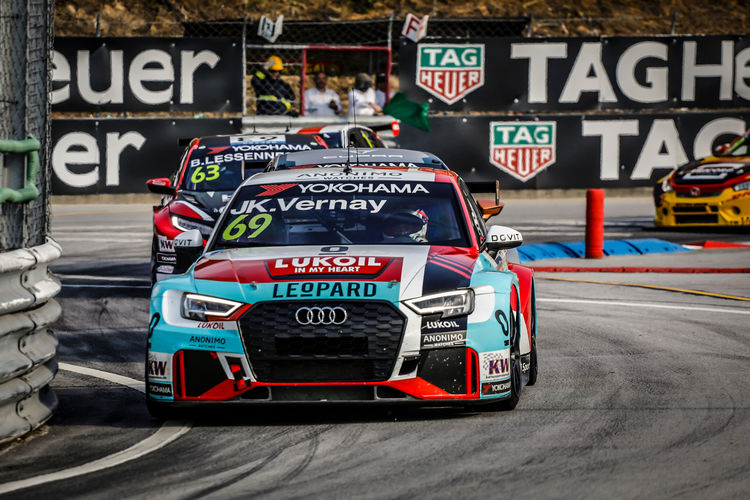 At the halfway point of the WTCR – FIA World Touring Car Cup season, Jean-Karl Vernay has established a good position as the best driver of an Audi RS 3 LMS. The Frenchman from the Audi Sport Leopard Lukoil Team is fifth in the championship after the fifth race weekend in Vila Real.

The Vila Real street circuit in northern Portugal doesn’t forgive mistakes. A heavy accident at the start of the first race and plenty of other damage as well as caution periods on the tight circuit demonstrated that valuable points could only be scored through discipline. Jean-Karl Vernay managed this in style. As the most consistent driver in the entire field he has collected points in 14 of the previous 15 races. The team performance in the first of the three races in Portugal was particularly noteworthy in this aspect: After Vernay had damaged the suspension and cooler after sliding off in qualifying, his team won the race against time. The Audi RS 3 LMS was repaired in the last minute and could therefore start the race from the pitlane. A strategically valuable decision: in the accident at the start, Vernay was not involved and at the restart could set off from fourth place. Fifth place in the first race, fourth place in race two and tenth place in the third race was the reward for the weekend’s hard work.

After taking tenth place in second qualifying, Gordon Shedden was able to start race two from first position due to the reverse grid rule. After he had led the race and finally crossed the finish line in third place, he received a five-second time penalty as he had crossed the track limits marking in one of the chicanes with all four wheels. The Scotsman from the Audi Sport Leopard Lukoil Team was sixth in the end. Frédéric Vervisch took the same position as best Audi Sport driver in the third race. The Belgian competes for Audi Sport Team Comtoyou.

“Jean-Karl Vernay and the Audi Sport Leopard Lukoil Team had some good results and scored more valuable points despite the difficult conditions,” said Chris Reinke, Head of Audi Sport customer racing. “His teammate Gordon Shedden led the second race, but was left with only sixth place after collecting a penalty. Also of note were the performances by privateer Aurélien Panis, who was best Audi driver in second qualifying, and Frédéric Vervisch who was best Audi Sport driver in race three.”

The sixth event is on the agenda in only three weeks. The race at the Slovakiaring not far from the Slovakian capital Bratislava is the final European race of the championship before the remaining four events in Asia.