Skip to content
We are using cookies for a better user experience.
06/24/19
Neuburg a. d. Donau
Sport 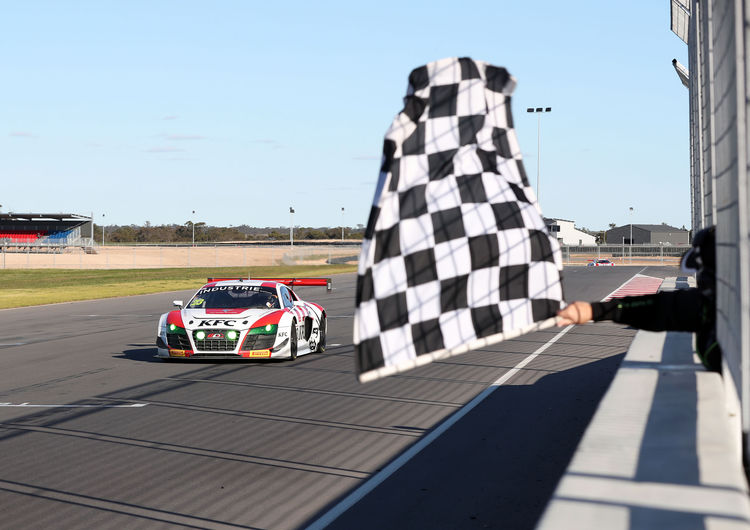 A victory and two further podium finishes: The third weekend of the Australian GT-1 Championship season was successful for the Audi drivers. The first race at The Bend Motorsport Park was won by Matt Stoupas in an Audi R8 LMS ultra. His fellow Audi driver Rod Salmon came third. In the second heat, Ross Lilley in his Audi R8 LMS ultra in third position claimed another spot on the podium.

Double triumph in Down Under: Vince Muriti in round three of the Australian CAMS NSW Production Sports Cars Championship season in Sydney won both races in an Audi R8 LMS ultra of the 991 Racing P/L team.

On the Nordschleife without a steering column: Schaeffler Paravan Technologie GmbH & Co. KG in collaboration with Phoenix Racing presented forward-thinking technology at the 24 Hours of Nürburgring. The “Space Drive” steer-by-wire system has no mechanical connection between the steering wheel and the axle. Audi Sport driver Rahel Frey drove an Audi R8 LMS using this steering system across the more than 25 kilometer long Nordschleife directly before the start of the 24-hour race. Markus Winkelhock will be driving the race car in future events of the DMV GTC racing series.

Successful debut: Anderson Tanoto and Mark Williamson in their maiden race in an Audi R8 LMS GT4 from Absolute Racing in the Blancpain GT World Challenge Asia celebrated two podium finishes. In round three of the season at Suzuka, they clinched a third and a second position in the GT4 classification.

Success in class: At the third event of the Campeonato de España de Resistencia, David Serban managed the leap into the top three in the C3 class twice. In the first race, he scored victory in class and finished the second heat runner-up in an Audi R8 LMS GT4.

Two victories for Hoogenboom: Round three of the Audi Sport Seyffarth R8 LMS Cup season that was held as part of the supporting program of the 24-hour race at the Nürburgring was dominated by Leonard Hoogenboom. The Dutchman won both races on the weekend from pole position and additionally set the fastest race lap twice. In the first heat, leader of the standings Robin Rogalski and Rudolf Rhyn completed the podium lockout and in the second race, Mike Hesse finished runner-up while Rogalski came third.

Within striking distance: With a second and a sixth position, Aleksey Dudukalo in an Audi RS 3 LMS defended second place in the TCR Russia standings at the Smolenskring. The driver from Moscow competing for the Lukoil Racing team is just three championship points off the overall leader. Two fellow Audi drivers finished in the top three too: Klim Gavrilov came third in race one. In the second heat, third position went to Pavel Kalmanovich.

Podium in Japan: Takuro Shinohara in an Audi RS 3 LMS secured a podium in round three of the TCR Japan. The Japanese started the first race from pole position but dropped to the fourth spot at the start before fighting back to second.

Top three result in Italy: Enrico Bettera, as the runner-up in the second heat of TCR Italy’s round three at Imola, claimed a podium finish in an Audi RS 3 LMS from Pit Lane Competizioni.