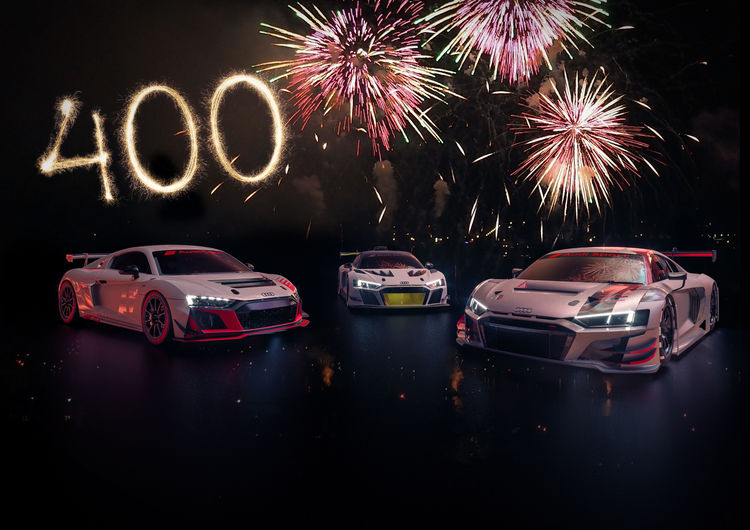 Audi Sport customer racing is celebrating an exceptional season: while the customer teams have clinched 58 titles worldwide, the brand has set several milestones in production in the program’s 13th year.

The 2021 season began with a world premiere: On February 5, Audi Sport customer racing presented the second generation of the RS 3 LMS, whose predecessor with 180 units is still the brand’s most successful racing model within a single vehicle generation. On June 11, the Audi R8 LMS GT3 set a record with the 138th example of the second generation. It overtook the predecessor model, which was produced 137 times. And in December 2021, the 400th GT sports car in total for motorsport left the factory hall in Biberach at Audi’s Neckarsulm site. In addition to the successful GT3 models, this count also includes the near-production GT4 sports car, which has now been produced 100 times, and the GT2 variant. With the start of production of the Audi R8 LMS GT3 evo II, which debuted in July, and the Audi RS 3 LMS gen II, Audi Sport customer racing has realized two model launches in 2021. These figures prove how firmly the Audi Sport brand is anchored in global customer racing. The unit sales and market shares underscore that the GT sports cars and the touring cars with the four rings are among the most popular products in global competition. At the same time, the successes in motorsport have a positive impact on the production cars that form the basis of all four race cars from Audi Sport customer racing.

The program’s sporting record is equally positive: Customers have won a total of 58 titles in the 2021 season to date on the four continents of America, Asia, Australia and Europe. Further title decisions for this season will be made by February 2022. “Our thanks go to the many dedicated and loyal customer teams that run our race cars from Canada to South America, throughout Europe, Asia, Australia, New Zealand and South Africa,” says Chris Reinke, Head of Audi Sport customer racing. “They are the backbone of the program and the guarantors of our sporting successes.”

Outstanding championship results in GT3 racing include five title victories by Team WRT in the European and two more by MPC in the Australian offshoot of the Fanatec GT World Challenge. Also noteworthy are the ADAC GT Masters title win by Montaplast by Land-Motorsport, first place by Audi Sport Italia in the Sprint and Endurance Championships in Italy and the title victory of Audi Sport Asia Team Absolute in Chinese endurance racing. A total of 27 titles – from driver championships to team and junior classifications – went to the GT3 model with the four rings. Over the course of 246 races, the sports car has achieved 198 podium finishes worldwide, including 79 victories. Two endurance successes stand out from the balance: the overall success of Audi Sport Team Saintéloc at the Indianapolis 8 Hour in October – a round of the Intercontinental GT Challenge – and of Team Rutronik Racing by TECE at the Sebring 24 Hours, the finale of the 24H Series in November.

In the young category of GT2 racing, the Audi R8 LMS GT2 also recorded top results straight away. The driver and team titles in GT America went to GMG Racing. In the Pro-Am classification of the GT2 European Series, High Class Racing prevailed. The year’s tally includes 13 victories and a total of 20 podium places in 16 races, cementing Audi’s reputation as a competent supplier in the broad world of GT racing.

The GT4 version of the Audi R8 LMS was more popular than ever before especially in European racing series. In addition to ten championship titles, the production-based model contributed significantly to the track record with 99 podium finishes worldwide, including 43 victories, in 199 races. Notable among these was Saintéloc Racing’s fourth GT4 title in a row, this time in the GT4 European Series. The all-female Giti Tire Motorsport by WS Racing team recorded a 24-hour class victory at the Nürburgring this year.

Audi remains top in touring car racing as well: The first generation of the entry-level RS 3 LMS showed top form with 17 titles. Among others, Audi won the TCR New Zealand with Track Tec Racing and the TCR Australia with MPC Bostik Racing for the first time. The successor model also won its first laurels when Comtoyou Team Audi Sport won the Trophy classification in the WTCR – FIA World Touring Car Cup. Both model generations together achieved 86 victories and a total of 258 podium places in 342 races this year. For the sixth time since 2017, a customer team also won a 24-hour race with an RS 3 LMS: the class victory at Sebring went to the Belgian private team AC Motorsport.

For the fourth year in succession, the world’s only Audi one-make cup rounds off the motorsport program. Rüdiger Seyffarth organizes and promotes the Audi Sport Seyffarth R8 LMS Cup. For the second time, Robin Rogalski emerged as the best driver from the competition with identical race cars. 17 different drivers collected points in three classifications over the course of ten races at the wheel of the production-based Audi R8 LMS GT4.

Additional contents
>> All titles at a glance
>> 2021 season highlight video