{{ activeItem() }}
Twitter
04/23/21
Track walk done on @CircuitValencia with the @FIAFormulaE layout, 3.376 km and 15 corners. &gt;&gt;… https://t.co/fkhNJNAx4Z
04/23/21
Some more photos from earlier this morning. High-resolution photos are available in the Audi MediaCenter: &gt;&gt;… https://t.co/DOnFC2NlCf
04/23/21
Good morning. An early start for Audi Sport ABT Schaeffler at @CircuitValencia today. Watch this space for our late… https://t.co/0C07Paq2Lb
04/22/21
Show time: @LucasdiGrassi had a busy afternoon at @CircuitValencia with filming for @audispain, together with the A… https://t.co/Lu1Cow1Lyp
Audi Sport on Twitter
{{ activeItem() }}
Facebook
04/22/21
Electric siblings: Audi e-tron FE07 and Audi RS e-tron GT* at the 2021 ABB Formula E Valencia E-Prix. >> audi.com/FormulaE #Audi #etronGT #FutureIsAnAttitude #ValenciaEPrix -------------------- *Power consumption combined: 20.2-19.3 kWh/100km (NEDC); 22.5-20.6 kWh/100km (WLTP); CO2 emissions combined: 0 g/km. Information on fuel/electricity consumption and CO2 emissions in ranges depending on the equipment and accessories of the car. Further information: www.audi.com/dat.
04/21/21
The first-ever Spanish Formula E E-Prix will take place this week. Looking back at the previous four official pre-season tests at Circuit Ricardo Tormo, Valencia. >> audi.com/FormulaE #FutureIsAnAttitude #ValenciaEPrix
04/20/21
Behind the scenes in the Audi Sport ABT Schaeffler ABB Formula E garage. Team Principal Allan McNish takes us for a tour. The Valencia E-Prix takes place this week on April 24 and 25. >> audi.com/FormulaE #FutureIsAnAttitude #ValenciaEPrix
04/19/21
Well done to our customers for their success with all four models from Audi Sport customer racing this past weekend – highlighted by the race victories for the Audi R8 LMS GT2 at Monza. 🇮🇹 🇩🇪 🇭🇺 🇨🇳 >> audi.com/GT2 >> audi.com/GT3 >> audi.com/GT4 >> audi.com/TCR #PerformanceIsAnAttitude
Audi Sport on Facebook 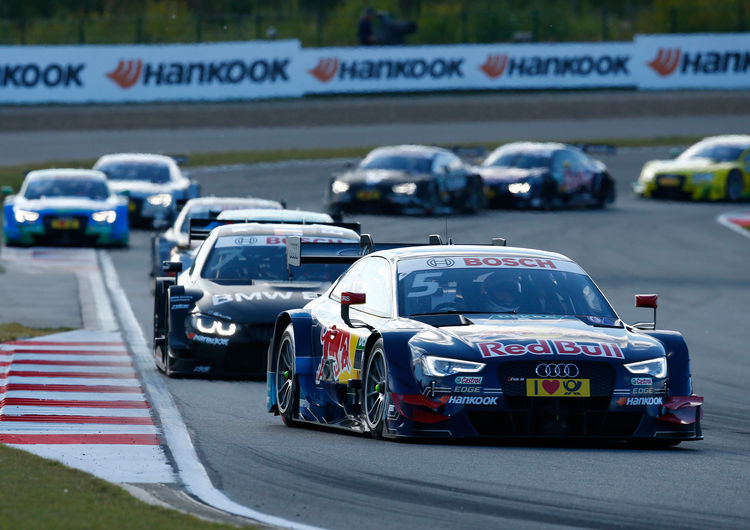 The Audi DTM squad is facing a particularly important race weekend: the Nürburgring, on September 26 and 27, may produce a preliminary decision in the DTM title race – in the drivers’ as well as in the manufacturers’ championship.

In both classifications, Audi is lying in wait before the last two race weekends of the 2015 season. Mattias Ekström as the runner-up in the standings is trailing Mercedes driver Pascal Wehrlein with a deficit of only 14 points. In the manufacturers’ standings, Audi is holding position two as well.

“Obviously, we’d like to travel to the finale at Hockenheim in October as the front runners in both classifications,” says Dieter Gass, Head of DTM at Audi Sport. “As we’re finally going to compete with comparable weights again at the Nürburgring the chance that we will do so definitely exists.” The success-induced ‘performance weights’ are playing a crucial part in the popular touring car racing series this season. Audi has won every other of the 14 races so far, so the Audi RS 5 DTM cars have been loaded with weights corresponding to the brand’s success. At the Nürburgring, Mattias Ekström’s car will be lighter for the very first time this year than the Mercedes-Benz of his fiercest rival Pascal Wehrlein, who has had an average weight advantage of 6.1 kilograms so far.

“At the Nürburgring, we’ll be competing on an equal footing,” says a pleased Mattias Ekström. In 2005 and 2011, the Swede won in the Eifel. Next weekend, he will have the chance to recapture the lead of the standings. If he wins both races, the Audi driver, irrespective of Wehrlein’s results, will be the front runner in the Championship again.

The lead of the standings has changed an amazing seven times in the 2015 DTM – between the four drivers who after 14 of the 18 races are holding the top four positions. Three of them are Audi drivers. In addition to Ekström, Edoardo Mortara (–30 points) and Jamie Green (–33 points) continue to be in the title race. 100 points are yet to be awarded in the remaining four races.

“The Nürburgring has always suited me especially well,” says Edoardo Mortara. The Italian has been on podium in the Eifel twice, most recently last year. Jamie Green expresses a fighting spirit as well: “My RS 5 DTM is a winning car. I can hardly wait to be driving it with less weight again.”

A look at last year’s grid reveals that the Audi RS 5 DTM ‘is comfortable’ on the short configuration of the Nürburgring covering a distance of 3.629 kilometers. In 2014, five of the top six spots went to Audi.

Those who would like to witness the race live at the Nürburgring can secure tickets at www.audi-motorsport.com. As usual, ARD will be airing live coverage of both races: on Saturday, starting at 13.00 (CEST) and on Sunday, starting at 13.20. Additional live streaming will be available at dtm.com and bild.de. The Audi Sport TT Cup will be competing on its penultimate race weekend of the year in the Eifel as well.